Once Upon 1969: Sharon Tate is the only reason to watch ‘The Wrecking Crew’ 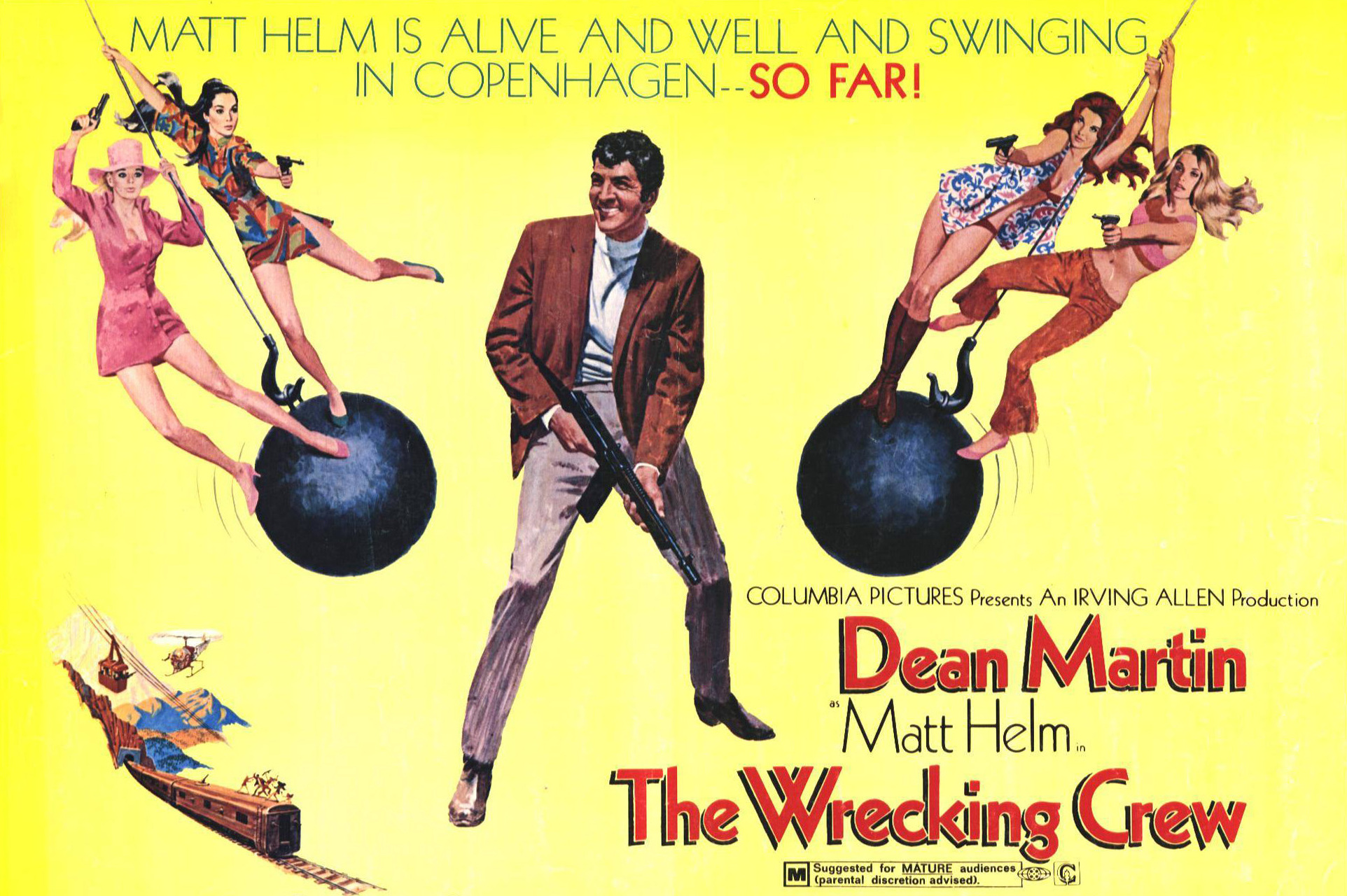 To celebrate the release of Quentin Tarantino’s Once Upon a Time in Hollywood, all this week we’ll be running pieces about the films of 1969 — the good, the bad, and the ugly, much like you’d find at the multiplex or at your local arthouse if you were going to the movies alongside Rick Dalton and Cliff Booth. You can find all of these pieces here, alongside our forthcoming review of Tarantino’s latest.﻿

Out of all the plentiful references to ‘60s films that are featured in Once Upon a Time in Hollywood, no single one is more prevalent than Phil Karlson’s The Wrecking Crew. Footage from it and its poster are both given the spotlight in the trailer, and its undoubtedly stirred up a ton of interest in the Matt Helm series from previously unaware viewers, curious about why a guy like Tarantino would spotlight this particular movie. Well, it’s probably not worth your time to check it out: The Wrecking Crew is a ghastly end to its franchise, the kind of ugly spy-spoof that time rightfully left far back in the past. It is only worth watching for the context that it gives Sharon Tate’s scenes in Hollywood, and offers few pleasures outside of it.

But first, a little background on Matt Helm. The series’ path to the screen came about because of producer Irving Allen (no relation to disaster movie maestro Irvin Allen), who once operated English production company Warwick Films alongside Albert R. Broccoli. If that name sounds familiar, it’s because the latter went on to found Eon Productions with Albert Saltzman in the early ‘60s a few years after Warwick had collapsed thanks to the financial failure of their biopic The Trials of Oscar Wilde. Those two would bring James Bond to the screen — an opportunity that Allen and Broccoli had had years before they finally were made.

According to some, Allen actually met Bond author Ian Fleming, and told him to his face that his “stories weren’t good enough for television.” Broccoli disagreed, and by 1965, he’d made a mint off of his former partner’s folly. Wanting a spy franchise of his own, Allen snatched up the rights to crime fiction writer Donald Hamilton’s Matt Helm series, and tapped Dean Martin to play the lead role. Their first collaboration, The Silencers, hit theaters in ’66, and it was a reasonable hit. Two other sequels, Murderers’ Row and The Ambushers, followed in short succession.

The Wrecking Crew would be the last film in the series, but you wouldn’t be able to tell that from the movie itself. An agent of Intelligence and Counter Espionage (called ‘ICE’ by literally everyone in the film without any explanation), Helm is put on the trail of a missing billion dollars in gold bars that was in transit via rail somewhere in Denmark. You should know that the very first moment we see the secret agent, he’s ignoring the calls from headquarters, fantasizing about the models that he’s going to be shooting that day. Did I forget to mention that his cover gig is that he’s a fashion photographer? Oh, yes: he’s fantasizing about making out with each of the models, including the one who is wearing a phone two-piece and trying to wake him up.

Anyways, Helm is sent to the country of Hamlet, where he immediately runs afoul of the local police after a bombing kills a turncoat fashion model before she can spill the beans. He’s rescued from his fate by the klutzy Freya Carlson (Tate), who is secretly a secret agent working for British Intelligence. They soon find themselves against the villainous Count Contini (Nigel Green), who, along with his lover Linka (Elke Sommer), have plans to destroy the world’s economy with the missing money.

It feels a bit unfair to the Matt Helm series to have this be one’s point of entry to it (a friend said the other films were better on Twitter, to which I responded that this must have been like watching A View to a Kill as your first 007 experience). The spy-spoof is very much of its era, which is to say that The Wrecking Crew is at turns both misogynist and racist in ways that would make Bond blush. Nearly every female character in the film meets a truly horrible fate — two are blown up by bombs hidden within their rooms, and others are gunned down without any sort of sense — and the film’s theme song is actively racist in the way that old Kool-Aid commercials were, which would cause modern audiences to cringe so hard they might explode. The light, goofy tone would be done so much better by James Coburn in the far superior Flint series, which was a contemporary to the Helm pictures, and the jokes, for the most part, land flat (though there is one gag at the very end that I chuckled at).

Laziness is the best descriptor for almost every aspect of this film with one very glaring exception that is the entire reason this movie has survived until this day. The fighting (which features a young Chuck Norris in his very first film role), the score, the humor, the writing, the direction: all of it is flat and uninteresting, and it would signal the death knell of the franchise as audiences had come to know it.

The true problem, sadly, lies with the star of the picture. To be frank, Martin was in a phase of his career where it really didn’t matter how well he acted, he’d still draw a crowd, and because of that lack of effort, Helm feels maybe a quarter as interesting as any other spy-spoof protagonist. Out of all the action actors in film history, he most reminded me of a late-period Charles Bronson, where he was still churning out Death Wish sequels despite his heavily advancing age and declining facilities. One wants to blame it on alcohol abuse in Martin’s case, but, ironically enough, Martin didn’t actually live up to his legendary reputation as a heavy drinker off-screen (which is a shame, because his legendary “Martin Burgers” recipe from The Celebrity Cookbook is only helped by the belief that he was shit-faced making burgers himself late at night). Dino, at that point, just didn’t give a fuck either which way. He didn’t really want to sell the punchlines he was given, or do any of the fight choreography, or even ogle the beautiful women that the producers and casting director had surrounded him with. It was the very definition of a paycheck role, and thanks to the deals he’d negotiated with Allen at the beginning of the series, it’d be a very healthy one regardless of the gross.

That lone bright spot I mentioned earlier is Tate, whose commitment to her part in every aspect is unequaled by her co-stars. She’s stuck in an incredibly thankless role as Freya, where she is either playing a clumsy punchline to Helm’s jokes or as a nag meant to drag him (and the entire film) from scene to scene so that eventually it can come to an end. She’s got a transcendent lightness about her when she’s not busy doing pratfalls or pretending to be interested in Martin, and an interesting screen presence that could have been explored in any number of ways later on in what would have been a presumably long career.

Her fight with Nancy Kwan, here playing the chief henchman of Count Contini, showcases both her follow-through and care in learning her choreography — from the master himself, Bruce Lee, no less — and it’s easy to imagine her transitioning to the chief spy franchise of the day at some point down the line. Yet, much like a miner who headed out to the Yukon in search of easy riches, you have to sift through a whole lot of grit in order to see what gold bits remain, and it’s not worth the effort on one’s part to do that when a film like Valley of the Dolls exists.

Though a fifth Matt Helm film, entitled The Ravagers, was planned and teased at the end of The Wrecking Crew, it wouldn’t come to pass. Martin had had his fill of spy action over the tail end of the ‘60s, and when audiences didn’t turn out for the latest installment in the way that Allen might have hoped, the crooner left the franchise for greener pastures. He’d have his pay withheld by Allen since he reneged on their original deal, but eventually he’d be released from the part and he wouldn’t be recast. Karlson, too, would move on, and he’d have some success with the Joe Don Baker hit Walking Tall in 1973. But the time of the spy spoof was slowly coming to an end, anyways, and a Matt Helm TV show, pushed by Allen, would essentially be stillborn upon its release. By that point, Bond had already begun to descend into self-parody, and Roger Moore’s tenure as 007 would only help to further solidify it. Perhaps it was right for Martin to call it quits then and there. Tate, unfortunately, wouldn’t have any choice in the matter.