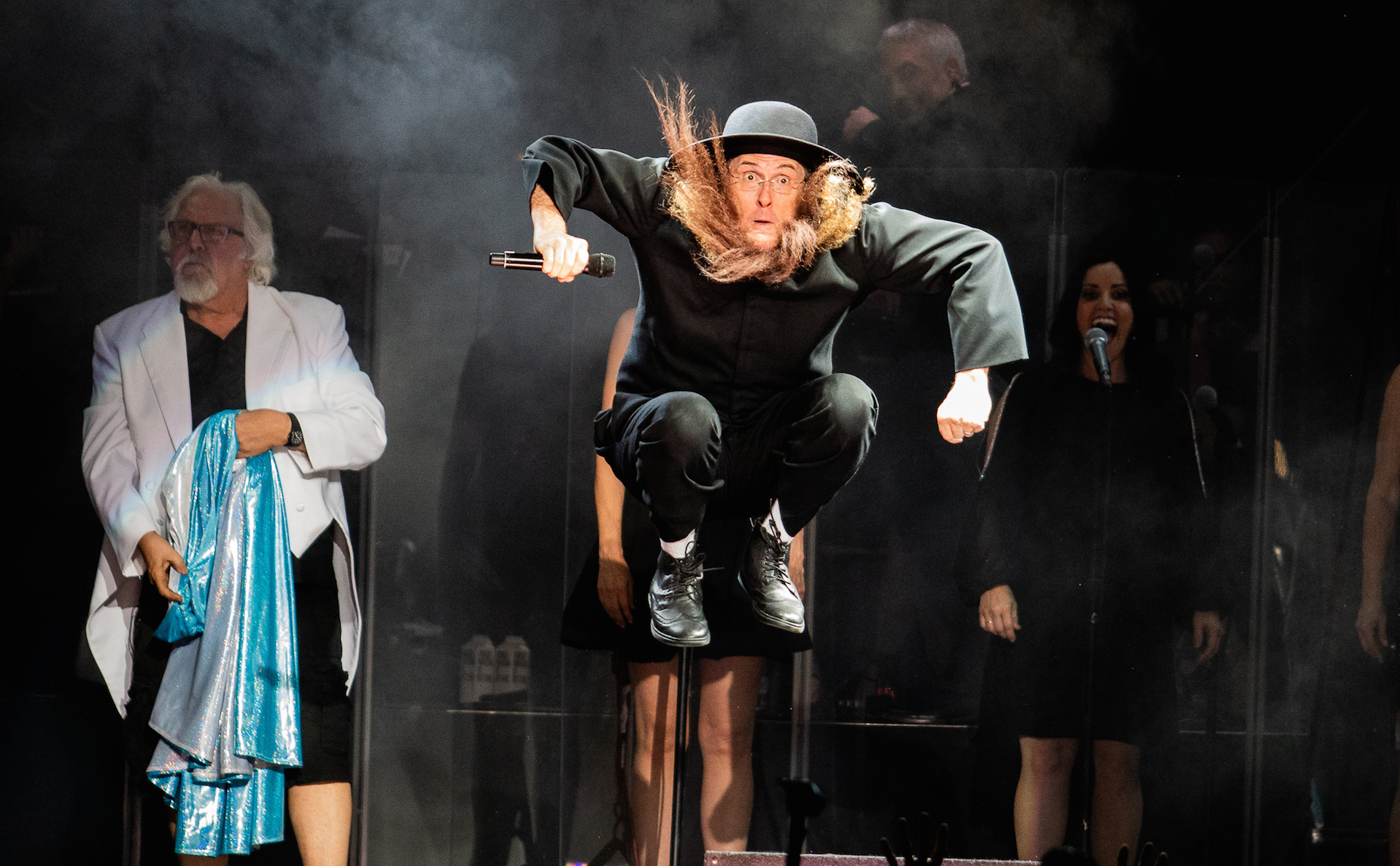 “Weird Al” Yankovic has been finding new and exciting ways to deliver his legendary parody stylings to hordes of passionate and committed fans all over the map. With that being said, whatever he does to keep things fresh when he hits the road each year, it’s always uniquely weird, and uniquely Al. And as he brought his “Strings Attached” tour to Rockland Trust Bank Pavilion on Sunday (July 21), accompanied by a full 41-piece orchestra, it was quite clear that this was no exception.

Falling on the 30th anniversary of the release of Yankovic’s cult-classic film UHF, fans were still finding their seats as the orchestra started in on the Indiana Jones theme to warm up for the night. Following a selection of scores, rounded out by the themes from Mission Impossible, Superman, and of course, Star Wars, fans buzzed in anticipation as they waited for their pop-culture deity to take the stage, and started the night with a standing ovation as Yankovic appeared.

It’s no big stretch to say that fans weren’t sure what to expect from Al and his band of instrumental wizards when it was announced late last year that they’d be playing in front of a full orchestra, but throughout the duration of the 17-song set, which was peppered with both new and old offerings from Yankovic’s catalog, it became abundantly clear that it was really just the same ol’ Weird Al. With absolutely bonkers ability to play off the energy of the crowd, and with an unmatched physical energy himself, which becomes increasingly impressive when you factor in that he’s pushing 60, Yankovic belted out classics like “Jurassic Park,” “I Love Rocky Road” and “Like a Surgeon” with expert precision, sparing none of the details that make each song great for the sake of conserving steam.

While his parodies are what folks come to see, it should be noted that his choice of original tunes, which included “Jackson Park Express,” and a Viking helmet-clad rendition of “Weasel Stomping Day” are what truly solidify Yankovic’s legendary oddity. Without them, he might just be “Funny” or “Lyrical Genius” Al Yankovic, which are both astute descriptions, but they just don’t roll of the tongue as easily.

Although he spent a vast majority of the night on the stage, Yankovic did take a few minutes to take a stroll around the venue while he sang his Pharrell parody, “Tacky,” with fans, and while there are so many aspects to his “multimedia extravaganza” that explain why he’s still such a beloved figure in music and comedy, it’s his connection with his fans that really embodies the reason why he is so adored by fans all over the world. Not to mention, the amount of credit he makes sure his band receives is almost unheard of, as he took the time more than once to point out his longtime cohorts guitarist Jim “Kimo” West, bassist Steve Jay, keyboardist Rubén Valtierra, and drummer Jon “Bermuda” Schwartz for their musical mastery.

With a series of videos displaying the vast cavalcade of TV and film references involving Yankovic over the years, the crescendo of the evening was in sight as a quartet of classics showered the crowd with nostalgia. Following a few costumes changes that helped to drive “Smells Like Nirvana” and “Dare To Be Stupid” home in all of their original glory, Yankovic changed gears to his Gangster Rap staples in “White & Nerdy” and “Amish Paradise” to end the main set.

Before Al and crew returned to the stage for an encore, fans were left standing as the piano intro to “The Saga Begins” rang out and members of the 501st Legion, an organization dedicated to accurately recreating the armor of Stormtroopers, took the stage alongside Darth Vader and R2-D2 to fully round out the euphoric nerdtopia that was taking shape in the Seaport.

Picking up his accordion for the first time in the night to deliver the opening riff of “Yoda,” the perfect ending to yet another great spectacle executed by Yankovic culminated in a matter of seconds, as he spun, jumped, and struck a few squeeze box power stances to close the show, before showing his gratitude for the nearly sold-out crowd one last time before calling it a night.

It certainly wasn’t a “Weird Al” show of the olden days, but the artistic growth and creative experimentation proved that not only does he still have that “it” factor, but it also showed that Yankovic, more than likely, isn’t done looking for more ways to make his live shows stay fresh, fun, and forever weird as hell.

Check out images from the show below.