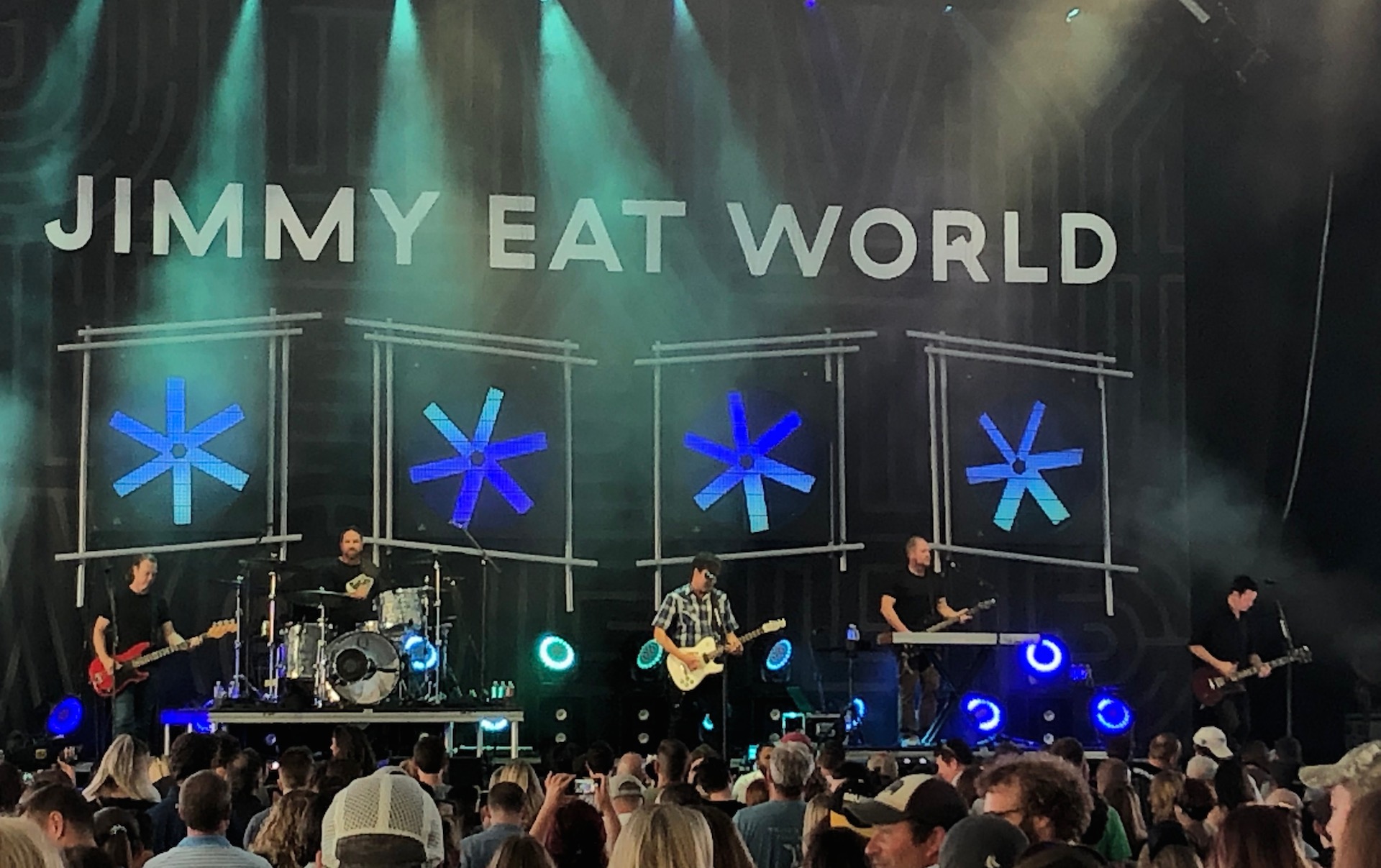 The pairing of Jimmy Eat World and Third Eye Blind for the “Summer Gods” tour seemed at first blush like another arbitrary, nostalgia-driven mash-up of two disparate bands that just happened to peak in popularity around the same time. Yet there are slightly less surface-level reasons to suspect that fans of one group would dig the other. Just as Jimmy Eat World are a pioneering emo band whose sterling production and pop hooks helped them find a place on alt-rock radio playlists, Third Eye Blind are alt-rock radio mainstays whose earnest, explosive choruses and relatable themes endeared them to many an emo kid.

Perhaps most crucially, both acts have maintained devoted fanbases long after the hits dried up, while continuing to push themselves artistically; Third Eye Blind raised eyebrows last year by taking on Bon Iver and Santigold for a covers EP, while 2016’s Integrity Blues was one of the best albums of Jimmy Eat World’s career. Monday night at the Rockland Bank Trust Pavilion, each band toed the line between giving the fans what they wanted and positioning themselves as vital, modern concerns.

Ra Ra Riot may have been a relatively youthful choice for an opener, but their set still sparked nostalgia. It’s just that, rather than evoke the sound of 1997 or 2001, they recalled the bright indie-pop which took over the airwaves in the early 2010s. They’ve rebranded pretty thoroughly since debuting with more of a chamber-pop aesthetic in the late 2000s, though violinist Rebecca Zeller is still there to contribute some fun solos. Two stately, organic new songs which gave off strong Modern Vampires of the City vibes also hinted that the upcoming Ra Ra Riot album Superbloom could return them to their original trajectory. That being said, the synthy, super-catchy likes of “Beta Love” and “Bad Times” more than succeeded in bringing a smile to the faces in the crowd.

When Jim Adkins’ voice sounded, to put it kindly, pitchy on Jimmy Eat World’s opening number, “Pain,” I have to admit that I briefly feared Boston had caught the band on an off night. I needn’t have worried; by the very next song, “Futures,” Adkins had locked in with his beyond-tight bandmates, and for the rest of the 14-song set there was no stopping them. Fully aware that they only had an hour to play and that much (if not most) of the audience consisted of Third Eye Blind partisans, they delivered a rapid-fire run-through of their most beloved songs, largely drawing from their two biggest albums, Bleed American and Futures. The setlist wasn’t without its surprises, however, with the decision to break out the stunning epic “23” a mere five songs in a particularly jaw-dropping one.

When forced to cram a 25-year career into 60 minutes, certain sacrifices have to be made, and some of them are going to be painful. Clarity might be the greatest emo album of all time, but its only representative on this night was the dazzling “Lucky Denver Mint.” The similarly dazzling “Sure and Certain,” meanwhile, was the only Integrity Blues track to make the cut. There was time for a new song from a forthcoming album, though it gave little indication what to expect for the new record, as “Love Never” was the sort of workmanlike, melodic rocker Jimmy Eat World can write in their sleep. But that’s just more reason to catch them on their next headlining tour. This night was all about letting the most heartfelt band in the biz play with your emotions like a yoyo, as they inspired headbanging and fist-pumping (“Bleed American,” “Sweetness”), choking back tears (“Work,” “Hear You Me”), and sometimes both at once (“Big Casino”).

Three songs into Third Eye Blind’s set, having just sung “Never Let You Go,” a sublime slice of pop-rock whose outro is marred by some unfortunate pseudo-rapping, Stephan Jenkins took a moment to address the crowd. What started as an apology for not finishing the new Third Eye Blind album in time for the tour (yes, all three bands on the bill have new records in the oven) soon turned into a humblebrag about how they had managed to sell out The Pavilion anyway, which then turned into a deeply melodramatic we’re-all-in-this-together speech. It all was almost too perfect a microcosm of the Third Eye Blind live experience; Jenkins may be a bit much, and his unselfconscious rock-star routine may grate on your nerves, but damn if he doesn’t bring the goods when it matters. The dude knows how to work a crowd, jumping all over the stage and hitting every big note with genuine enthusiasm. It helps that his current bandmates are rock-solid pros who crucially nailed not just the dynamic shifts of Third Eye Blind’s hormonally crazed alt-rock corkers and quiet-to-loud power ballads, but the feeling of raw-nerve volatility which gives those songs their spark.

A mid-set semi-acoustic portion yielded both highs (the sweet dorm-room strummer “I Want You;” the tender, yearning “Motorcycle Drive By”) and lows (“Slow Motion,” which takes the edgelord tendencies Jenkins so cunningly snuck onto “Semi-Charmed Life” and blows them up to tediously cartoonish extremes). “Jumper” came shortly after, and I’m honestly not sure I’ve ever heard a louder audience sing-along. Guitarist Kryz Reid even paused to let the crowd yell the guitar solo before coming in with his own version, enhanced with some extra shredding for good measure.

Few outside of the Third Eye Blind fanbase seem to realize just how large and passionate that fanbase is, and if The Pavilion faithful didn’t make their presence felt on “Jumper,” they certainly did on “Semi-Charmed Life,” as they knew the lyrics so well that Jenkins let them sing multiple verses and choruses without him. He reasserted his frontman bona fides when the band closed with “Losing a Whole Year,” yelping the emo anthem with desperate force before falling to his knees for an awesome full-throated scream. In moments like those, the playing of these decades-old songs felt less like nostalgia than the continual, collective processing of formative joys and traumas whose stings have never softened.