‘Shaft’ Review: You’ve gotta be fucking kidding me with this 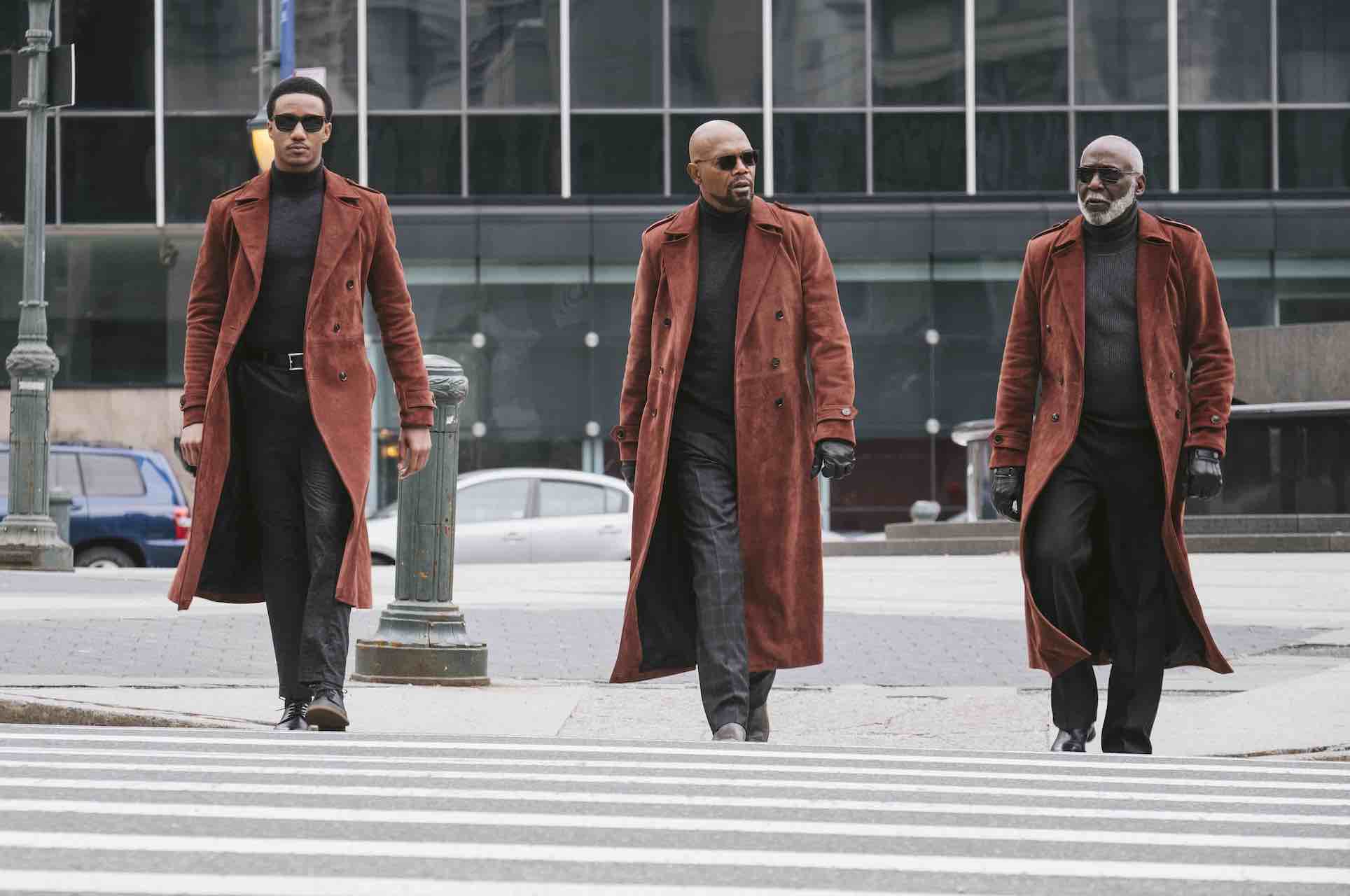 Twenty-two years ago next week, the closest cinematic equivalent to Tim Story’s Shaft that I can think of (and relate to) hit theaters to the angry outcries of nerds everywhere. Yeah, that’s right, I’m talking about Joel Schumacher’s Batman and Robin, the ensuing backlash to which killed off the Tim Burton era of the Caped Crusader’s adventures for good. Even though with the benefit of hindsight we can see that the Burton films were never all that hyper-serious to begin with (seriously, just go back and watch Jack Nicholson choke on all the celluloid he’s chewing), fans who’d been raised on that stylized and gothic take on the Dark Knight were stunned to find that the dark aesthetic they’d loved had been replaced by garish fluorescent excess. The dialogue had been entirely consumed by Moore-era Bond one-liners, the performances hammy and over-sized, and the action goofy and gaudy. And one could only imagine what it was like, as a devoted fan, sitting through a Friday night showing, packed full of laughing families, feeling the blood vessels in your forehead slowly swell and your face slowly grow red with frustration.

The key difference between Batman and Robin and Shaft is that, at least, Schumacher’s film had some semblance of style and after-the-fact camp value that makes it well worth a rewatch if you’re the kind of person who misses a time when DC superheroes weren’t so self-serious. It’s also one of the gayest visions of modern superheroics ever put to film, taking the subtext that so frightened Fredric Wertham back in the ‘50s and making it fodder for an over-sized ball of a film. Shaft has no such redeeming qualities, being the kind of lifeless slog meant to capitalize on existing IP in order to con viewers into watching it — no wonder this is a Netflix co-production. Its style is ugly and flat, its humor doubly so, and it ultimately represents the suppression of revolutionary black cinema by its current corporate overlords, in that the Black James Bond himself is reduced down to your boorish father-in-law at his most gin-soaked. To all the people in the world who wondered if Dark Phoenix would be the worst piece of shit to hit screens this summer, all I have to say is be careful what you wish for.

We open up in the early ‘90s, to a song other than the “Theme From Shaft,” where John Shaft II (Samuel L. Jackson) and his wife Maya (Regina Hall, one of the very few bright spots in this film), in the midst of an argument, are shot at by a pair of hired assassins. Shaft makes quick work of the duo, but his wife is fed up with him and her constantly putting his young son, J.J. (or John Jr.), in danger because of his work. Indeed, Baby J.J. was in the back seat during this gun battle, and this pushes Maya over the line. She leaves Shaft and takes her son with her, and we’re greeted with a montage of Shaft’s failure as a father over the next 20 years. He sends his son condoms for his tenth birthday, and a stack of playboys right around the time that the grown J.J. (Jesse Usher) is about to head off to MIT. In the present, Shaft the Younger works as a data analyst for the FBI, where he’s constantly hounded by his boss (Titus Welliver) and never given the opportunities he deserves. But when a friend turns up dead, having “relapsed” in a way that makes it look like he’d been given a hot shot, J.J. decides to solve his friend’s death in whatever way he can, and he turns to his father for help.

Now, I know what you’re thinking: This doesn’t sound too bad, right? Exclude that little bit about the condoms and whatnot, and you’ve got yourself a decent potboiler that might explore the difference in upbringing between these two generations of men, whose varying socioeconomic circumstances and experiences might provide them with some sort of meaningful conflict. Remember, though: This is a comedy directed by the man who brought us 2005’s Fantastic Four, so you better bet all of that is abandoned in favor of some super-hoary jokes about how gay and effeminate millennials are. The much-maligned Twitter advertising (you know, the “avocado toast” stuff) wasn’t just a last-second attempt to get butts in seats, it’s actually the basis of the entire movie.

The entire film is the same joke, repeated ad nauseam, in which J.J. does something in a modern fashion, and Shaft makes fun of him for being a square. This ranges from the homophobic, in which Shaft mocks the name of a veterans organization called “Brothers Watching Brothers” as a means of potentially proving that J.J.’s dead buddy might have been on the down-low, or the misogynistic, in which Shaft basically tells the kid that women don’t know what they want and need to be put in their place in order for him to get laid (and, sure enough, when the gun-phobic Jr. stars gunning down goons in front of his love interest, she, of course, smiles and bites her lower lip). We’ve also got some Islamophobia tossed in the mix as well, as the Shafts suspect that an Imam up in Harlem might be behind the whole thing, only for J.J. to insist that, when the man’s eventually proven innocent, that he was going to do something anyways.

Now, I don’t believe or endorse the concept of “clapter,” and I try to be as honest as possible with you as to what I find funny in movies. I would tell you in a heartbeat if I found the “politically incorrect” humor in something like this funny, much like I did to my great shame and embarrassment in my review of Daddy’s Home 2 (God, why did I even bring this up?). So I can tell you honestly that I didn’t laugh once during this god-awful piece of shit. The humor is so lazily-written and executed that it’s absolutely nuts that Story and his co-writers didn’t cause Sam Jackson to fall over with the amount of leaning they do on him in order to sell a punch line. It’s just so exhausting and boring that it doesn’t even really try to cross over into the realm of “parody,” instead emphasizing its cheap-o studio comedy vibes to the point of sameness. It wants to look like every other anonymous B-list flick you’ve watched in the last five years, and it hopes you won’t notice how bad it is. Usher’s totally failed by this approach, as it seems to be the defining ethos behind his casting in most movies, in which he’s set up as the legacy character to replace a popular actor. Imagine if Will Smith was trapped in a bunch of roles early on his career where he was forced to shadow older, more famous, actors: it would take a Herculean effort to take this movie away from Jackson, and very few would be up to the task.

The saddest part of this latest Shaft is how content Story is to strip-mine the IP of its essential parts, and it renders the entire enterprise moot. The New York location shooting, a feature of the previous Shafts (not including the sequels or the TV show from the ’70s) under both Gordon Parks and John Singleton, is replaced with the anonymous, digitally-altered landscapes of downtown Atlanta. It removes the texture from the setting, and only reinforces the blandness. The Hayes theme is present, but the classic vocal call-and-response isn’t. Richard Roundtree, the literal coolest motherfucker alive, does show up, but he’s in the same mode as Jackson, in that they’re both sleepwalking to a paycheck. The action is sub-DTV standard, but it’s still a relief compared to the ugly digital cinematography that defines the rest of the film’s look, as Story is permanently stuck in 2004 in his approach to everything behind the camera. All in all, this new Shaft is an utter betrayal of every single thing that this character stood for, and it’s hard to believe that this didn’t go straight-to-Netflix in this country as well. Just do yourself a favor: Avoid this at all fucking costs. Watch Black Dynamite instead.