Even at Boston Calling, Guster are still digging for their next great idea 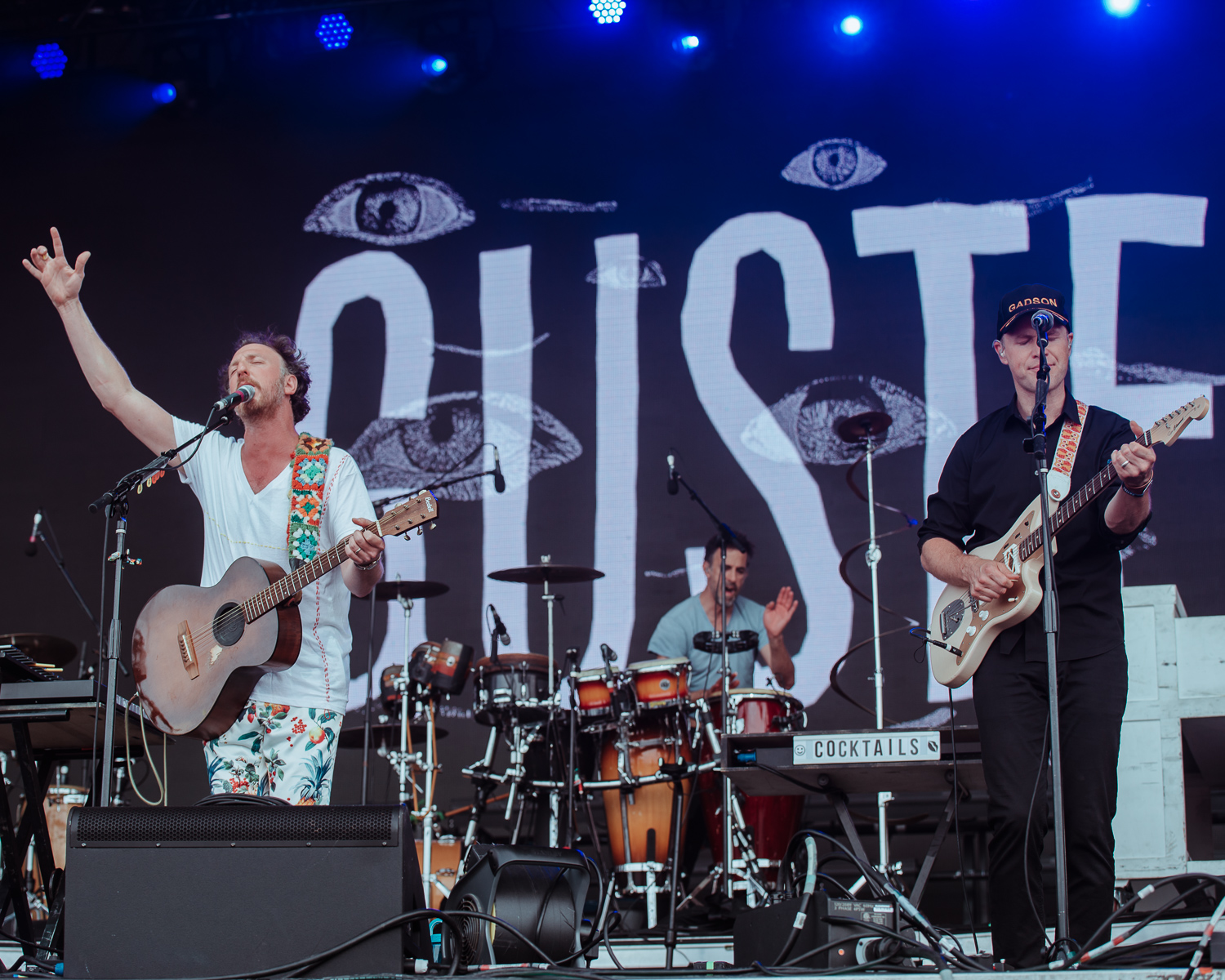 When you’re a Tufts University-born band that boasts a 27-year-career, work can take you anywhere from your hometown’s major music fest to a vintage keyboard museum in Calgary, Alberta.

For Guster, some locales are just more obvious than others.

Fresh off the January release of eighth studio album Look Alive, the band set up their well-earned post on the Delta Blue Stage of Boston Calling for the tenth edition of the fest on Sunday (May 26). The gig was a far from the early days of Guster — Gus, even — which spurred on dreams of booking non-college gigs and musically venturing out of Medford and into Cambridge.

“I remember our mentality in those days was just the next hurdle — and the next hurdle was usually if we could get our demo tape accepted into the Tufts battle of the bands, that would be enough,” drummer and bongo master Brian Rosenworcel tells Vanyaland on-site at the fest. “And then maybe if we could figure out how to play at Harvard Square or get a gig off campus, or get a college gig, or make an album. So there was really no grand vision for our longevity or any success at all. It was just like ‘this is so cool and fun and exciting, let’s just see what the next step is and keep it going.’ [And so,] we’re keeping it going.”

“Keeping it going” initially looked like a post-college van purchase and a record deal in 1997, until it literally became Keep It Together, their album that birthed the #1 Billboard Triple A song “Amsterdam.”

“Every time we returned to a city, there’d be two times as many people,” says Rosenworcel of the group’s earlier days. “After a while, we started to feel like the universe was telling us something — this is reacting.”

Today, their reaction still reverberated in Boston, ripping through the crowd Sunday as they recited the bawdy lines “Barrel of a Gun,” a nugget from Lost and Gone Forever that will never, ever become too buried in the group’s catalogue to resurrect live.

“It feels special to be doing of these [festivals] in Boston because I feel like the crowd’s going to be there for us,” Rosenworcel says. “I’ve seen a bunch of Guster shirts in the audience already and it feels like a homecoming of sorts. As far as like, will we descend to the stage flying like Peter Pan with some crazy production idea? At 4 o’clock in the heat of the day on the Blue stage, we’re probably going to bypass that.”

A wise move, indeed, age and stage-presence-style considered, although lead singer Ryan Miller remained overwhelmingly aware of the age gap between Guster and every other band on the BC lineup (“I feel like grandpa Simpson,” he cracked).

In 2019, maintaining that key momentum looks much different for the group than it did in the early ’90s, mixing in the added complications of kids and living in different states. Look Alive, their first album in four years, was ultimately recorded in the National Music Centre of Calgary because their British producer couldn’t get a visa to work in Texas with them. Still, a similar thread of oddball alternative unravels from the nine-tracks of their newest album, true to form for Guster since Parachute.

“Sometimes it [musical changes] feels like a 180 to us because the reaction from our fan base is always one of shock if it breaks through this wall or does something they don’t expect it to do, or we’ll involve keyboard sounds that they might find off-putting but we find really fun and challenging,” Rosenworcel adds. “As long as melody is the thread that keeps Guster sounding like Guster, then everything else is up for debate. Are you communicating? Are the relationships strong enough where you want to try new things and be free and feel free? And not worry what anyone else thinks? Those are the factors that lead us to make Look Alive.”

For the time being, Look Alive is very much that — alive, kicking, and sufficiently kooky (have you heard “Overexcited”?) until their next concept tackles them into the next era of unconventionality.

“There’s always things every year that we’re doing for the first time. There’s just always new places to go, musically and otherwise and new ways to present the show,” he says. “There’s no part of Guster that wants to feel stagnant, so I don’t feel like we’re up against a wall at all. It’s about ‘how deep can we dig to find the next idea?’”