‘Captain Marvel’ Review: A sci-fi buddy comedy straight out of 1995

Marvel Studios' throwback superhero film may not be 'Black Panther,' but it's a lot of fun as it stands 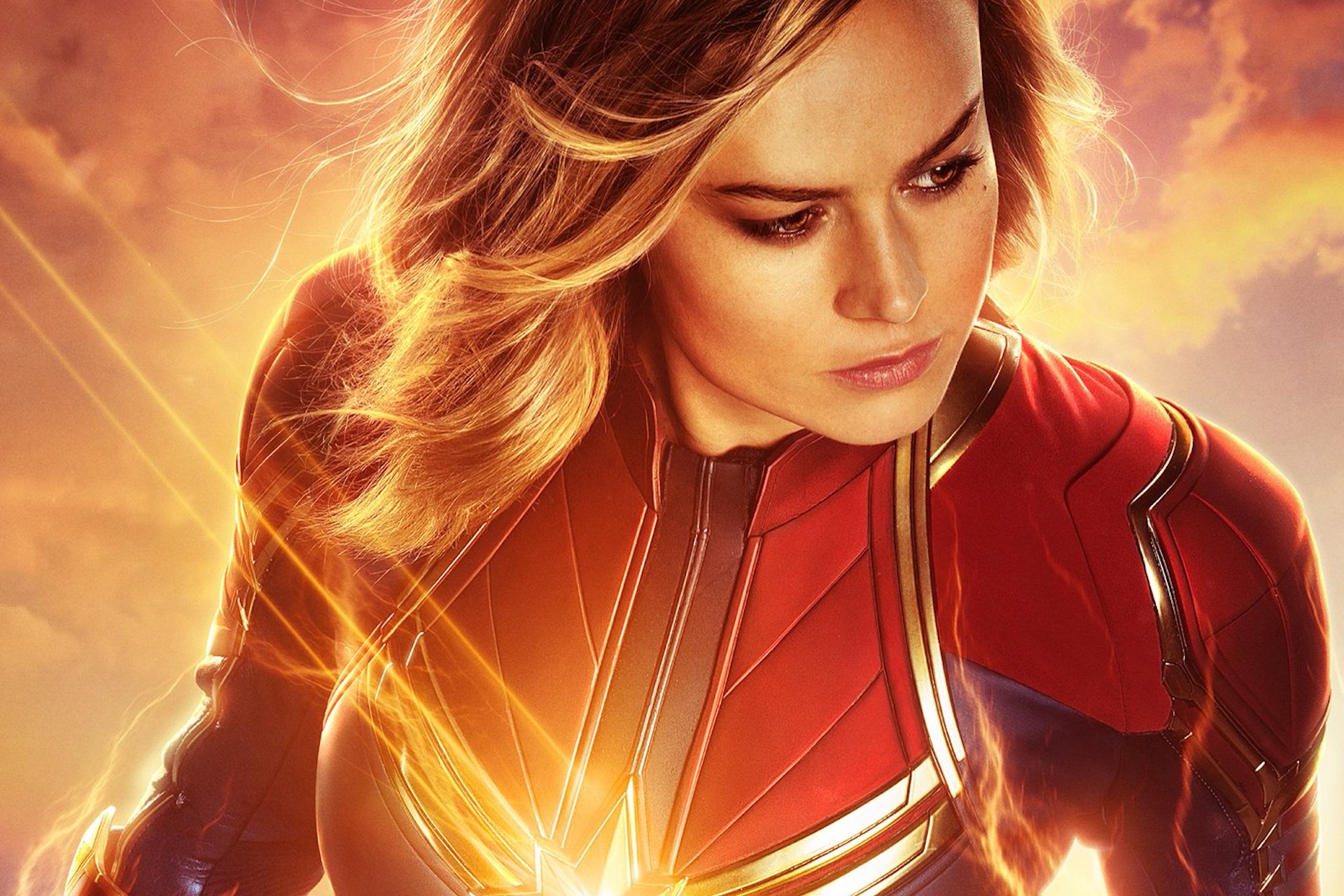 Warning: Possible spoilers are ahead.

Let’s clear something up pretty quickly: Despite everything you might have heard from the loudest corners of the worst parts of social media, Marvel’s Captain Marvel (that will never not be weird to write) isn’t bad, isn’t going to bomb, and wasn’t deserving of all this trouble from those types in the first place. I’ll spare you the continual “State of Marvel” bullshit we all are contractually required to do each and every time a critic reviews one of these movies, but let’s just say that it’s never been better, and this is another worthy entry into that world. Directed by Anna Boden and Ryan Fleck, who will be most familiar to audiences for their 2006 Ryan Gosling-led film Half Nelson, it’s a solid expansion of the Marvel Cinematic Universe’s more cosmic elements that’s buffeted by strong work from Brie Larson, the titular hero in question and the first woman to lead a Marvel Studios production (some five or six years too late, in a widely-held opinion). Captain Marvel is light, funny and quite satisfying, though it may leave you craving something a bit more substantive.

Larson begins the film as Vers*, a member of a band of intergalactic space cops known as the Starforce, who is different from her peers in the fact that, you know, she can shoot lasers out of her hands. Led by the goofily charismatic Yon-Rogg (Jude Law), the Starforce are the few and proud wetworks guys tasked with enforcing the laws of the Kree Empire (you know, the blue-skinned bad guys from Guardians of the Galaxy) all over the universe and hunting down the primary enemy of their blue-blooded race, the shape-shifting Skrulls. Vers is an efficient and effective soldier does her job, albeit not without a fair bit of ennui — see, she doesn’t remember who she is or where she comes from, her firmest early memory being that of a blood transfusion that Yon-Rogg gave her as soon as they hit the Kala, the Kree homeworld. But she’s haunted by glimpses of another life, where she had friends and family that she doesn’t recognize anymore. Even when she communes with the leader of the Kree, the Supreme Intelligence, a shapeless computer-creature that takes the form of the person communing with it admires most inside of its virtual world, she doesn’t know why it takes on the visage of a woman (Annette Bening) she’s never supposedly met before.

These early scenes are a bit rough, as Fleck and Boden take their sweet time trying to find the pace and really struggle with the fight choreography early on, and Larson’s work is wholly undermined by the fact that she’s playing an amnesiac (who is, by nature, blank as all hell). No attempt is made to flesh out any of the members of the Starforce (aside from Djimon Hounsou, who is given the lightest of origin stories for his appearance in Guardians here), given that their primary purpose narratively is to be cannon fodder in the film’s third act, but even a light touch of that early on would, perhaps, help to emphasize Vers’ alienation. It’s probably the most a Marvel film has struggled to grab one’s attention in the first minutes, but things do pick up quickly when a mission to recover a captured Starforce member results in Vers’ capture by a band of Skrulls.

While digging through her buried memories, the shape-shifters, led by the villainous Talos (Ben Mendelsohn, completing yearly “villain in a blockbuster” requirement while, once again, having the time of his life and stealing the show from all those around him) find something in her memory that makes them, with Vers in tow, travel to Earth. Look, just go ahead and buy a copy of Kree-Skrull War. It’ll make all of this shit go down so much easier.

Eventually, the soon-to-be Captain Marvel escapes from her captors and crash-lands into a Los Angeles-area Blockbuster. It’s 1995: Bill Clinton’s in the White House, Grunge is still a thing (kinda), True Lies has just hit video stores, The Fresh Prince rules the airwaves, and Internet cafes still suck. Some will undoubtedly find the period elements of this movie to be rough and/or pandering, but they never managed to overwhelm the experience for me, at least. They’re just silly needle drops and window-dressing, masking the actual ‘90s tribute baked deep into the crust of this film: it’s a goofy sci-fi buddy comedy (hell, even its particular brand of feminism feels very ‘90s Hollywood: girl power, all the way!), with a number of classic ’90s superhero trappings serving as toppings (the costumes!).

After all, it’s a bit difficult to be subtle when you’re making a crash landing, so Vers attracts a fair bit of attention from a group of black-suited S.H.I.E.L.D. agents, led by a young Nick Fury (Samuel L. Jackson), who is still a bit green behind the ears when it comes to all of this superhero/alien business. Quick note: the de-aging effects work done on Jackson here is absolutely incredible most of the time, and there are only a few moments in which he looks rubbery or whatnot. It’s a shame one can’t say the same about what was done to Clark Gregg’s de-aged Agent Coulson, but whatever: The tech is advancing, and let’s hope it’s as good in The Irishman as it is here.

Anyways, Fury and Vers are forced into an unlikely but surprisingly easy partnership as they attempt to track down a faster-than-light drive that (deep breath) a S.H.I.E.L.D.-adjacent scientist was developing for a weapons manufacturer which the Skrulls seem to want for their own nefarious purposes (*gasp*). Along the way, they’ll learn things from one another: Fury will learn about just how small the world as he perceived is in comparison to its actual size, and Vers will learn that she was not just given an incredibly stupid name by Yon-Rogg when he found her body. She’ll learn that she was once an Earthling herself — a test pilot by the name of Carol Danvers — and that she had been kicking against the pricks her whole life until the incident that changed everything for her.

They’ll reconnect with her old friend Maria Rambeau (a fun Lashana Lynch) and help her recover her memories before taking on the true threat to the Universe and prevent the villains from escaping with the the material that they need. There’s some intriguing twists-and-turns, one of which is fascinating enough in the context of modern international relations (though I most definitely can’t spoil it here this far ahead of its release), and a swell resolution. You should, of course, stay for the credits.

It was a very wise move by the Marvel brass to pair Larson and Jackson together — regardless of Unicorn Store’s quality, it was apparent even then that the two had an incredible amount of chemistry — and Jackson’s presence gives the stoic Vers to react to external stimuli and, thus, helps us to see her more as a person and less of a construct. It also helps that the two are given interesting parallel arcs, which are fun to watch play out. Despite him always being steady and reliable, this is perhaps Jackson’s strongest performance in a Marvel Studios film, as he’s given much more range here.

Anytime he encounters Goose, a factory cat who later stows away on board a ship that Fury and Vers hijack (and who will definitely be the runaway sensation from this film), his voice rises an octave and he speaks in pitch-perfect baby talk to the fuzzy orange tabby, by far more than we’ve ever seen out of the sarcastic, crabby and wizened Fury before (God help me, every time he talked to the cat, I laughed so hard). Boden and Fleck aren’t typically known for their comedy work, but they nail the rapport between the characters and let each of the major performers get time to shine without it feeling like a shitty night at the Comedy Cellar.

Where they struggle, however, is in the fight scenes: each is so dark and incomprehensible that it’s easy to lose oneself in the muddled mess and only realize the outcome of a sortie well after its ended. For those who have complained that the Marvel movies are an affront to action and that their brand of super-cheap and easy CGI ‘splosion fests are not why Michael Bay died for our sins, dammit, well, you’re not going to find any quarrel here. The circumstances are dire, and one hopes that Marvel (specifically head honcho Kevin Feige) will eventually relent and make this not a facet of the studio’s style. The militarism is also a bit much (Bay-esque?) from point-to-point, and there’s one truly-groan inducing connection between all of the films made near the end of this one that might not be so bad if Captain Marvel didn’t end on it.

But those sour grapes don’t taste as bad when we’re just hanging out with this group of actors, watching them do solid work with one another. Indeed, it’s a mark of the quality of the ensemble that the film’s best fight is mainly a verbal one near the absolute end of the film, which very well may bring goddamn ceiling down on your heads in your theater from the hoots and hollers. And I can’t be too mad at Marvel when they spend $150 million making the kind of silly family Corman-corn that I would have eaten up as a kid (they even keep the aesthetic, to boot!).

Anyways, Captain Marvel is about as solid and as slick as you’d hope from the MCU these days, and it’s definitely a great time at the movies, but I was left lacking for something. Perhaps it was the finesse and punch of something like Black Panther, which I know is absolutely an unfair comparison given how earth-shattering that film’s particular (and enduring) moment was, but it felt like the studio was more comfortable innovating within its universe and involving its audience politically there than it was here.

Perhaps it was the rigidity of the character work and filmmaking of something like the Distinguished Competition’s Wonder Woman, which beat this film to screens and presented a full-formed character at the center of its film along with its solidly-directed and designed action sequences (credit’s due where credit’s due, though: there is no love story in Captain Marvel, which feels like a massive jump forward for the genre of big-budget superheroine films). And I can’t help but think that there was a bit of an opportunity squandered to do something bigger and broader here with the film’s messaging that might have been more easily baked into the narrative itself as opposed to merely complimenting it. But our vessels of inspiration are rarely perfect in and of themselves, and I’m very sure that the right people (re: young people of all ages) will find plenty here for themselves.

*I decided to preserve the eventual revelation of Captain Marvel’s true identity in this synopsis in the same way that the narrative does so that people who didn’t get bullied in high school like me and all of us other nerds get an idea of how the plot is structured.