Panic! At The Disco prove too much for Manchester 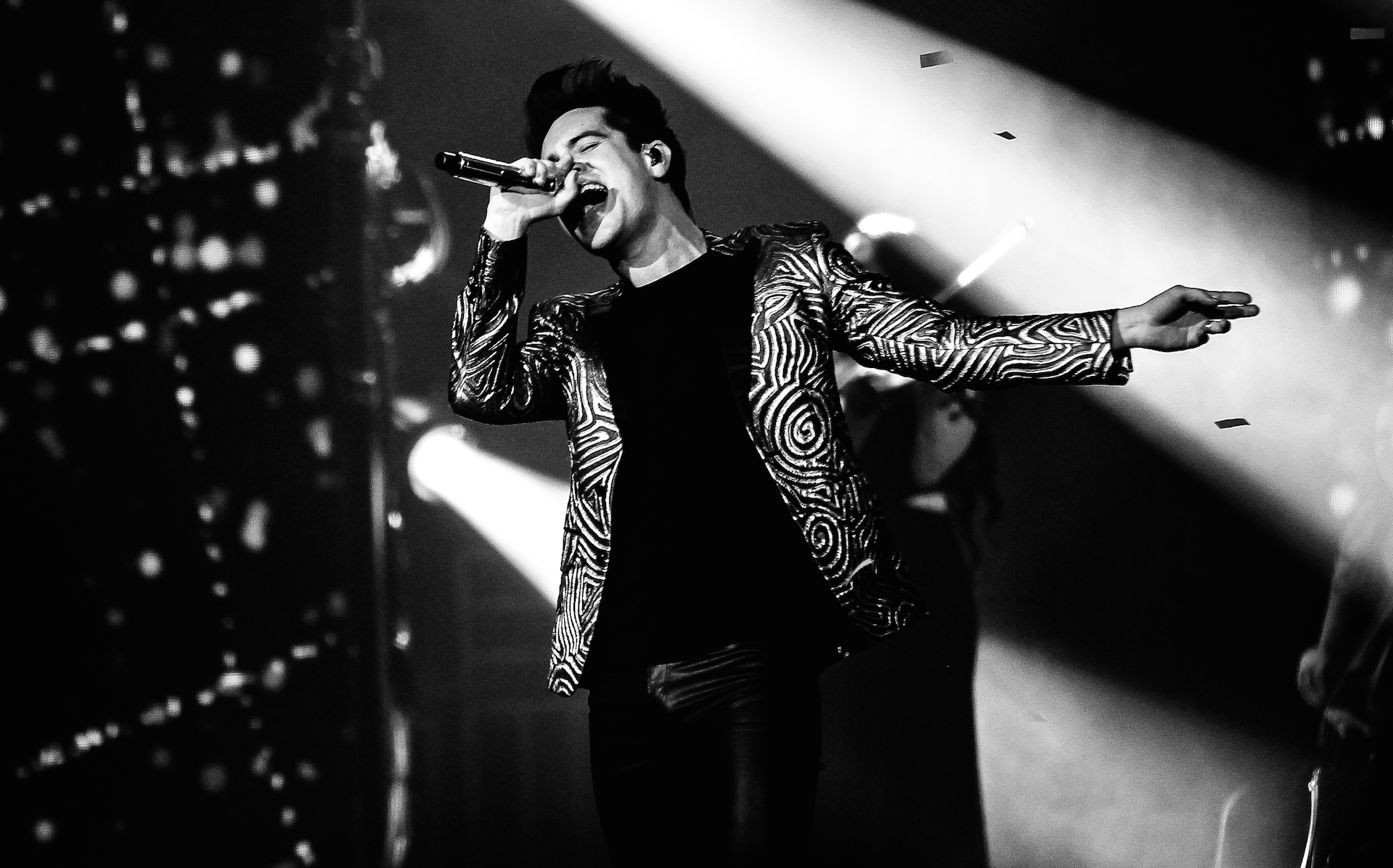 If crazy equals genius, then Brendon Urie is a fuckin’ arsonist — and he certainly brought the heat to a sold-out SNHU Arena in Manchester on Sunday night (January 13). Delivering the second leg of their critically-acclaimed “Pray For The Wicked” tour to the Granite State, Panic! At The Disco only further cemented their still-growing legacy as one of the most energetic and engaging live bands on the road today, pulling out all the stops to curate a night the packed house would not soon forget.

Australian-born, Berklee-educated synth-pop standout Betty Who got the show started with an energetic set that brought the bass early on, complete with a pair of choreographed dancers who, more often than not, were draped all over the singer in many… err, compromising positions. While packaged in a short time on stage, the home of the Monarchs transformed into Whoville as the stand-alone vocalist packed a punch that balanced a mix of power-pop and a rock and roll swagger that set the tone for the rest of the evening.

Turning it down a few notches was Bill Dess a.k.a. Two Feet, the New York indie rock fella and Berklee dropout who, only two-and-a-half short years ago, was nowhere near an opening slot on one of the hottest tours of the last year, cashiering in the Big Apple before his big break came. The emotion of his music oozed through the sound system as he soulfully cranked out a number of soothing, yet soaring guitar solos while sauntering coast to coast on the stage, basked in an intense blue light that only added to the singer-songwriter’s solemn stage presence.

Only a few months removed from stating that he didn’t want his story “to end just yet” after an apparent suicide attempt, Dess’ performance in front of a crowd that drenched him in adoration was triumphant and heartfelt, to say the least, as he closed his set with “Go Fuck Yourself,” the song that started it all for him.

The somewhat somber weight of Dess’ set seemed to linger for a bit — until Weezer’s cover of Toto’s “Africa” blared through the sound system, and the 10-minute countdown on the screens behind the stage began to tick. It was New Year’s Eve all over again as the crowd chanted the digits down to zero, the lights went out, and the inner 15-year-old in everyone unleashed simultaneously as the man of the hour, Brendon Urie, sprang up from a hole in the stage like the world’s most angelic pop-tart.

Putting the pedal to metal from the get-go, Urie and co. started the night with a confetti-filled “(Fuck A) Silver Lining” followed by a flurry of other fan-favorite dance grooves including “Don’t Threaten Me With a Good Time”, “Ready to Go” and “Hey Look Ma, I Made It!”. The first four songs of the 29-song set came and went at break-neck speed, but the party was only getting started as the Las Vegas-bred frontman basked in the fruits of his 15-year labor of love, smiles galore.

The setting seemed to be as optimal for the ever-energetic Urie as it was for the legions of screaming fans that sang along to every word of every song, as relentless energy and enthusiasm was reciprocated from both sides of the barricade.

While there were a few OG tracks peppered into the setlist to keep the longtime Panic fans happy with a fair amount of pent up teenage emo angst, with “The Ballad of Mona Lisa” and “Nine In The Afternoon” playing off each other nicely, a vast majority of the setlist focused on the last three albums that Urie has released, with “Hallelujah” and fellow Death of a Bachelor tune “Crazy = Genius” bringing a different feel to the room than their sonic predecessors.

With a break in the action, Urie made his way through the crowd, hugs and selfies abounding, to another piano placed on a platform that suspended him above the crowd while he dished out an emotional rendition of Bonnie Raitt’s “I Can’t Make You Love Me” before bleeding into “Dying in LA”. As he floated through a sea of cellphone lights that made him look like a shuttle in orbit, it became even clearer just how much heart Urie puts into his music, as he even brought himself to tears as he sang to the crowd beneath his feet.

The halfway point had long been reached by the time the horn section cranked into the band’s most recent smash hit “High Hopes,” but the fans were still picking up what Urie was putting down, without even the slightest bit of wear from either party.

Every glass-shattering high note he hit, the fans went bonkers. With every glance, wink and mischievous smirk, pandemonium ensued. There was nothing Urie or his band could’ve done to lose the crowd — not even when the entire sound system crashed hard for the last half the band’s cover of Queen’s “Bohemian Rhapsody”. In fact, the crowd continued to sing Freddie Mercury’s masterpiece as the faint echo of the drum kit rang through the arena and Urie climbed atop his piano to sing along with the crowd in silence. It was a spine-tingling moment that was representative of the type of emotion a Panic! At The Disco show intends to evoke from onlookers, and made the final stretch of songs even more enjoyable after Urie made a show out of nothing for, like, 10 minutes, coming out to sign a few autographs and keep the crowd occupied with his boyish charm, while they worked out the kinks backstage.

After a number of attempts to get the show back on track, and a few tries at addressing the crowd through a megaphone, Urie was finally able to return to scheduled programming and skipped the lead-up to an encore, driving straight on through “Emperor’s New Clothes,” and “Say Amen (Saturday Night)”. With the end of the night on the horizon, top hats and white gloves were implied, as arguably the most well-recognized string arrangement in pop-punk history chimed out, and a spirited rendition of “I Write Sins Not Tragedies” made way for a bombastic and eruptive finale in “Victorious”.

Panic! At The Disco turned up the crazy on Sunday night, and made the most out of their time on stage, as always. The only thing that really could’ve made it better, to be quite honest, was if that damn puppet made an appearance at least once. There’s always next time. 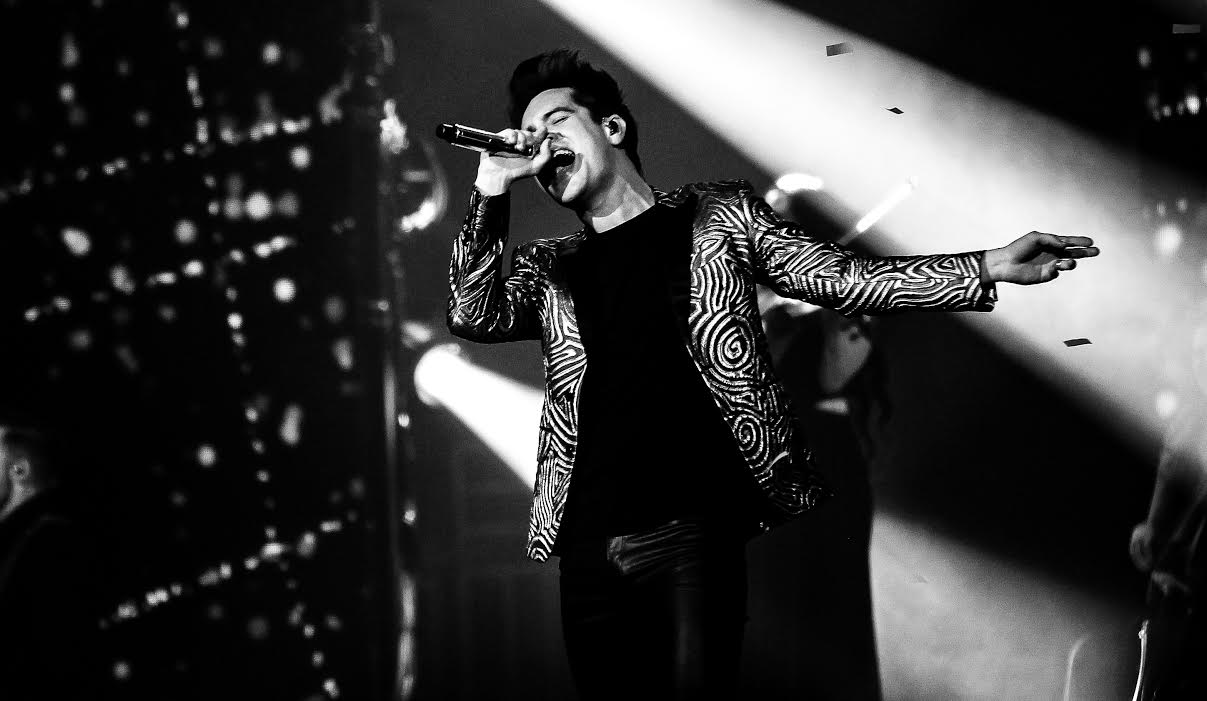