Noname holds court on a night of love, positivity, and empowerment

Live Review: The Chicago rapper and poet commanded the room at Royale, and not even a disguised illness could slow her down 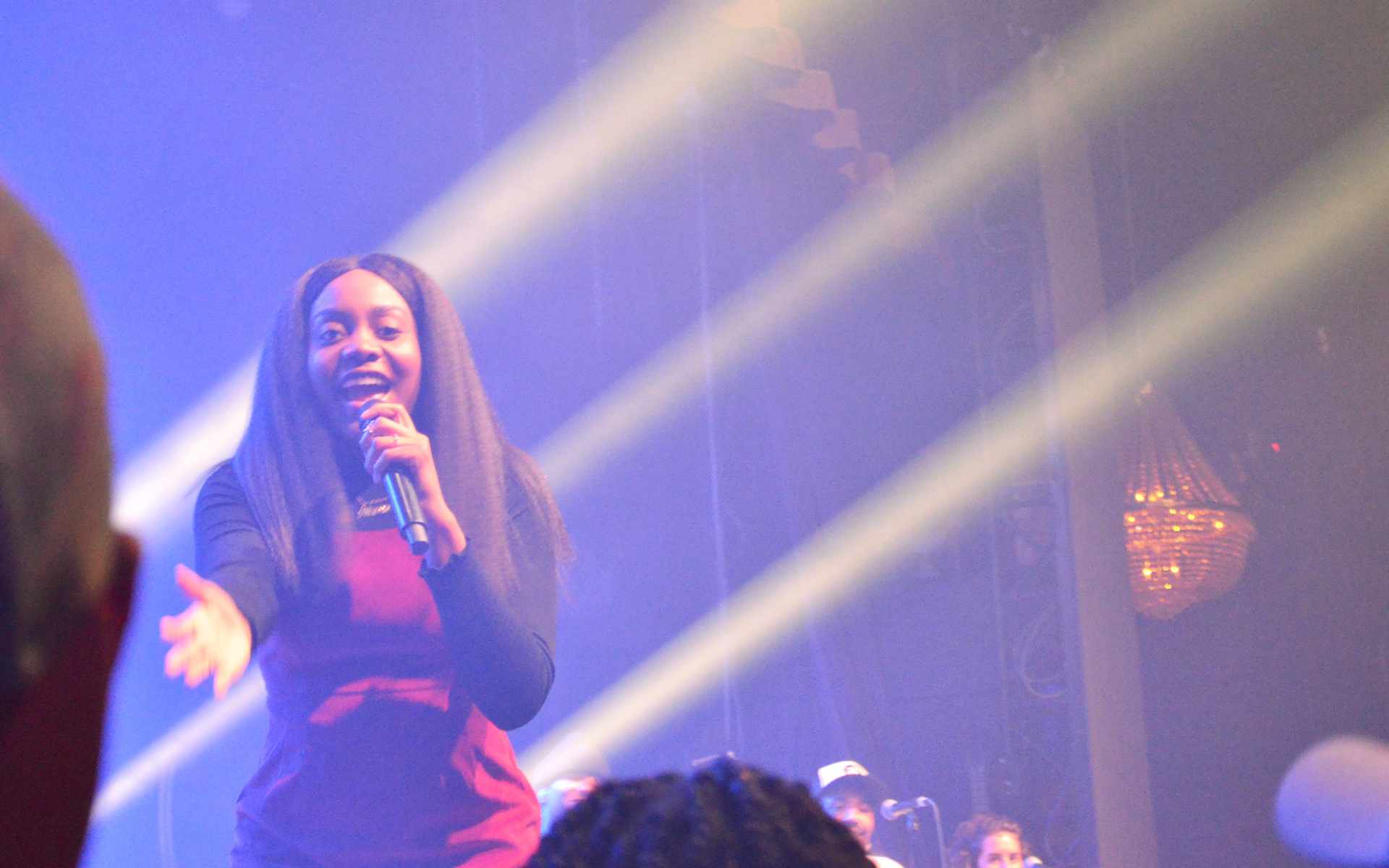 On Thursday night (January 10) at Boston’s Royale, the first of two sold-out shows, Noname showed just how persuasive and gracious she can be; from start to end, the venue beamed with love, positivity, and empowerment. It takes a certain (special) kind of artist to maintain that level of compassion within an audience. Maybe it’s her personality, maybe it’s her sweet tone in rapping, or maybe it’s the words she’s saying, but Noname had people hugging, dancing, and radiating with good vibes during her hour-long set.

Noname kicked off her show with “Self” off her newest album, Room 25. This set the tone for the night: “And y’all still thought a bitch couldn’t rap, huh? / Maybe this your answer for that good pussy.” She ended the song abruptly, with “good pussy” reverberating off the walls holding a mostly female audience.

A few songs later, Noname finished “Reality Check,” a song from her first album where she sings: “Don’t fear the light that dwells deep within / You are powerful beyond what you imagine / Just let your light glow.” As the verse ended, Noname was left standing center stage, arms wide, basking in the lights like some sort of rap goddess.

It’s clear Noname (and her opener, Elton) comes from the same Chicago rap family as the ever-positive Chance the Rapper. While sometimes braggadocious, they both choose to preach uplifting messages. And this frame of mind overwhelmed the Royale: Any negativity or judgment clearly wasn’t welcome in the space, because Noname was too busy rapping about sexual liberation and female empowerment and self-love.

Her show made of a point of bouncing between her songs with political critiques (of gentrification, capitalism, racism, etc.) and ideas of self-discovery and creative salvation. At the end of her next song, “Prayer Song” — a technically difficult rap executed to perfection — Noname’s silhouette stood swaying in front of lights that looked like the American flag. The song ended on the hook, “I was lost but thinking I was truly free / Darkness lingers in the wake of slavery.” She was able to quickly segue into “Regal,” about feeling like royalty in a healthy relationship.

It was at this point that Noname announced that she had been feeling sick, so her performance of her newest single, “Song 31,” may be sloppy. She requested “whatever love you all can send me.” Partway through the second verse, she stopped and laughed. The crowd, eager to give Noname the validation she wanted, cheered until she finished the rest of the song, unfazed by the slip-up. A few songs later for “Sunshine,” she came in on the wrong beat. The band stopped and she joked, “I’m a professional.” Again, the audience seemed unconcerned, rather grateful to be in Noname’s presence.

She ended the set on her titular song, “Noname.” With the band kicking off the song, she walked around the stage, microphone in hand, talking into it as if she were on the phone with a friend. “I make long-ass, dramatic intros — I’ve been talking a minute now and the band is still going.” The crowd knew the show was ending; it felt like everyone was leaning in, on the edge of their metaphorical seat, waiting for more of Noname’s conversational style and lyrical wisdom.

As she walked off stage, her body seemed to crumple, overcome by (presumably) sickness and exhaustion. But she returned soon after to give Royale one last ounce of sweetness in Telefone’s “Shadow Man.” Her energy returned for those few minutes, enough for her to rap about mortality and death: “Shadow man, shadow box, dance in the dark with me / This resurrected agony, there’s apathy for caskets.” As the background vocalists sang “Darkness keep you well” in the background and the audience feeding as much kindness onto the stage as possible, Noname walked off, smiling.