Lucinda Williams divulges secrets and spins stories at The Paradise 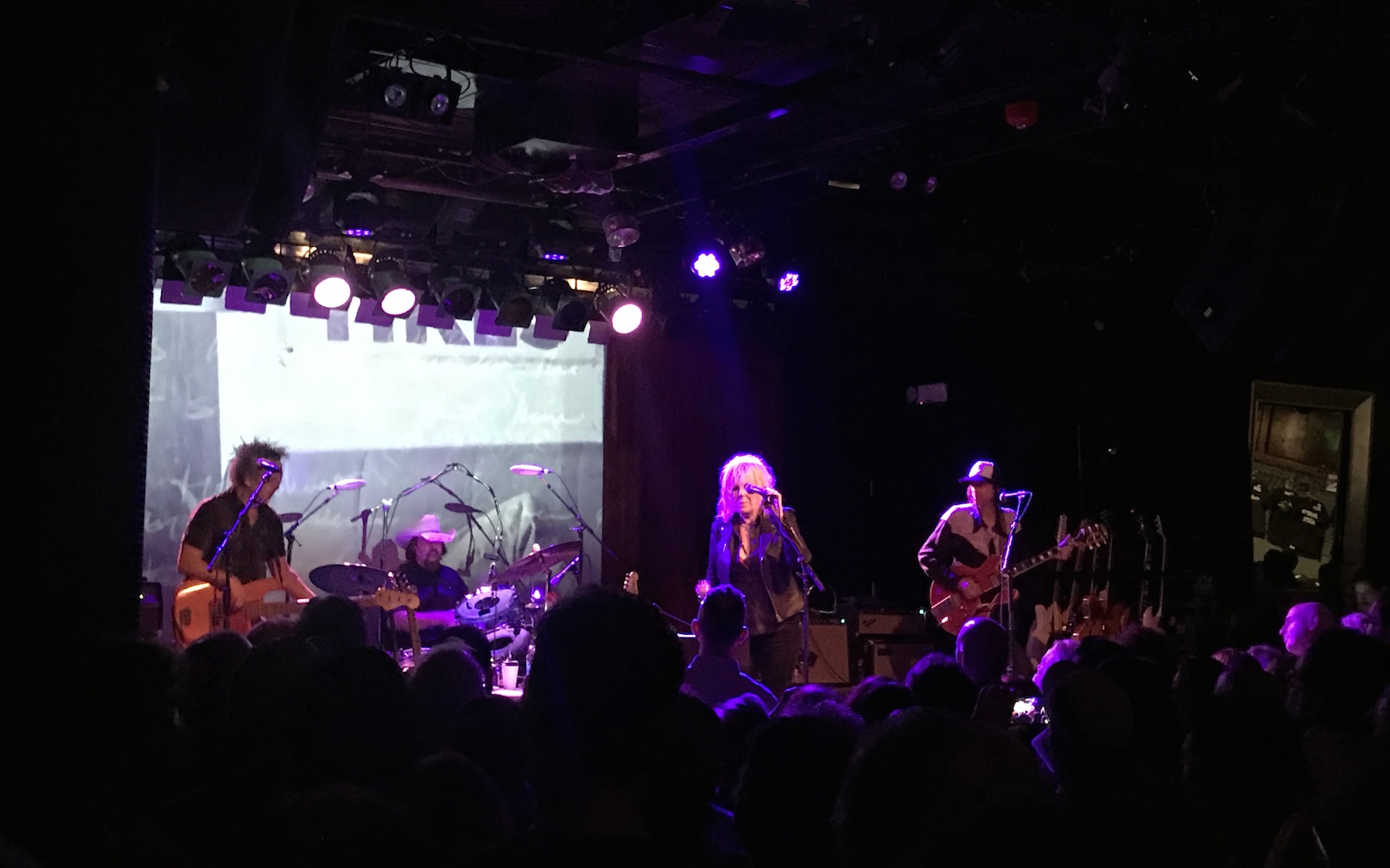 On Monday night, Paradise Rock Club transformed. At moments, it resembled itself: Loud, bustling, with bright lights and dancing folks. But there were many moments where the audience, eyes wide, felt like kindergartners during storytime. Lucinda Williams pulled up her rocking chair before every song and put an arm around the crowd (metaphorically, of course) before she divulged her secrets and spun her stories. In those quiet moments, The Paradise became a sacred space of wisdom-swapping and inside jokes.

Sixty-five-years-old and dressed like a feminine Springsteen in her black button-down, Williams celebrated the 20th anniversary of Car Wheels On a Gravel Road by playing it track by track. But even before she stepped in front of the mic, a visual story took the stage: Old film splayed over the back wall, displaying scenes from Williams’ early life. “I forgot what that looked like,” she started, before launching into a story about moving to Mexico City.

The show (and the album) began with “Right in Time,” a song about masturbating. Just like that, the tone was set: The Paradise was in for a night of intimacy in the form of Williams’ stream of consciousness between songs. She seamlessly guided a band of three men (The Buick 6), leaning in to the femininity and sexuality of the song and looking wistfully out at the audience. Williams then slid into her next story about the difficulties in finding a dirt road for her album cover (“We drove all over the place looking!”). “Car Wheels On a Gravel Road” naturally came next, with images of old automobiles and dirt road projected behind her.

Before she played “Drunken Angel,” Williams told the backstory: Blaze Foley’s drunkenness, time spent with Townes Van Zandt, and wasted potential. “That’s how it was back in the day,” she recounted. She played this role well — the part-storyteller and part-rock star describing painful (and joyous) parts of her life in joking anecdotes as well as beautifully heartbreaking songs. And from song to song, her voice continued to gain strength, not only getting louder and more forceful but more masculine.

For “Concrete and Barbed Wire,” she explains how the Berlin Wall influenced her songwriting at first, but now “it’s taken on a double meaning because we’re trying to put up a wall.” The crowd booed and Williams smiled.

Before “Lake Charles,” she took a moment to set down her guitar, looked out at the crowd with a grin, and proclaimed, “It’s like I’m talking to friends.” She then sings joyfully about loss — “Did an angel whisper in your ear / And hold you close and take away your fear / In those long last moments” — as the projection behind her displays a photo of her ex-boyfriend. In the music, Williams has been telling another story all along: The process of getting over someone, of mourning, and eventually, of joy.

In her reminiscing, Williams also told a story of falling in love with a bass player. “I feel really embarrassed,” she says, turning away from the microphone and laughing. Someone in the back yelled, “More stories!” and the crowd rejoiced while she grinned.

Later, she ends with “Joy” and then “Jackson,” a strong contrast of rock and roll segueing into a somber ballad. In the arc of the show, Williams brought the sadness and nostalgia at first, the pain and heartbreak next, the liberating joy, and with “Jackson,” the lessons learned.

Her first encore (yes, she played two encores totalling a two-and-a-hour show) gave Williams the space to assert more politics, maybe in an effort to rile up the crowd for midterm elections the following day. She ended the first encore with “Foolishness,” speaking to fear-mongers and liars, so she could energetically return for her final encore. Her set closed emotionally with a cover of Springsteen’s “The Rising.”

Though she had played her encore through without pausing to tell a story, as the music got louder, she decided to let it speak for itself. “That’s what rock and roll is,” she said. “It’s just letting the music lead the way.”

While the music eventually told its own story, Williams clearly relished the opportunity to speak about her personal experiences. “No one is safe from the mighty pen,” she declared. “My dad had said something about that, too. You take your chance.”