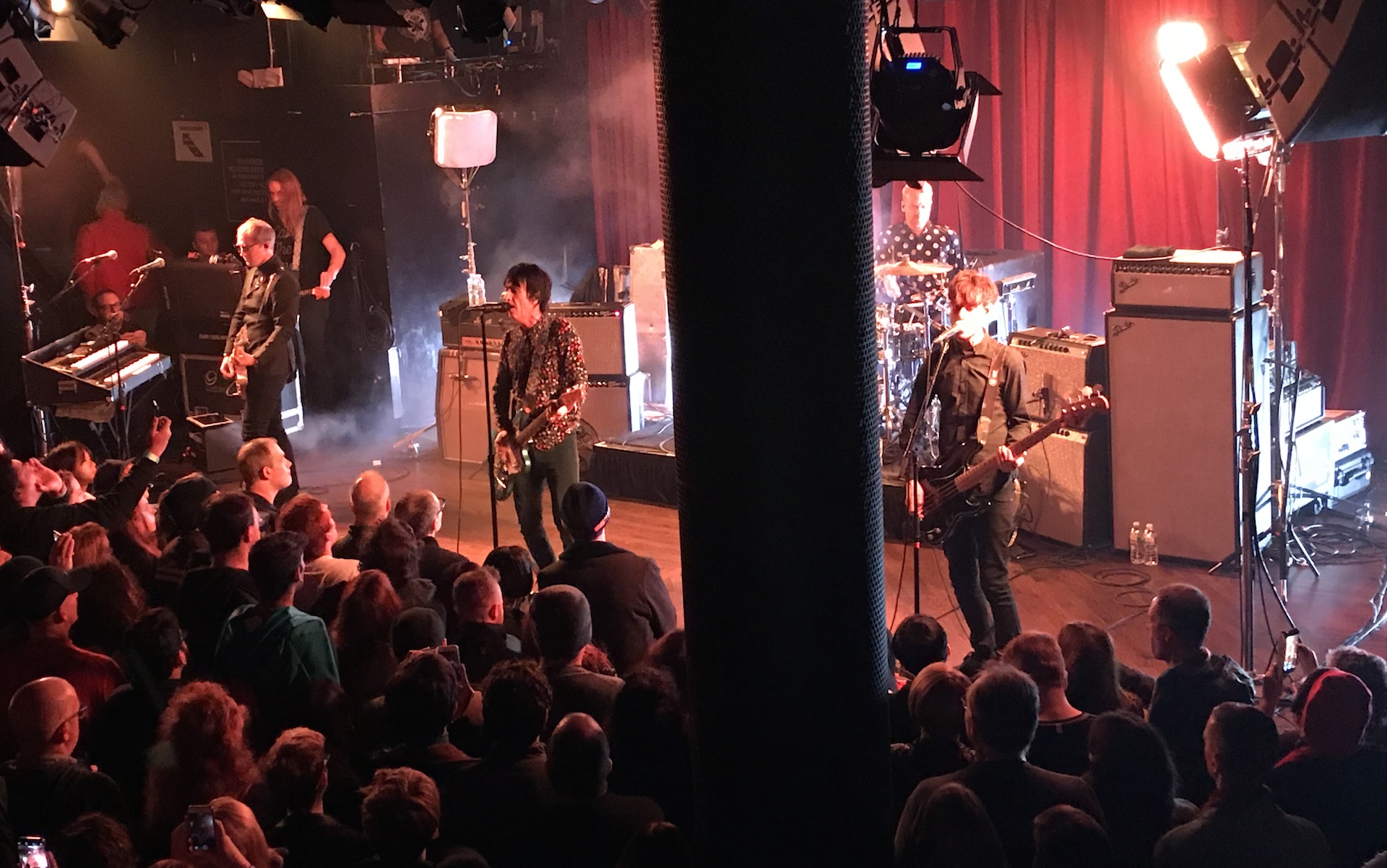 It’s a good time to be Johnny Marr.
Classic alternative is hip again. Morrissey is not. And on Sunday night (October 21) in Boston, Marr and his band brought his signature jangly guitar-pop to a sold-out Paradise Rock Club for one of the final stops on his successful North American tour.
Recent years have shown us a different side of Johnny Marr. In The Smiths, he was one half of an iconic songwriting duo, quickly developing a reputation as a gifted, innovative guitarist. Later, he acted as a hired gun, joining bands from The The to The Cribs. But in 2013, fans were treated to Johnny’s first solo album, The Messenger; sure, we enjoyed him as the frontman of Johnny Marr and The Healers in the early 2000s, but his solo career was, and continues to remain, different.
On this tour, Marr is supporting his critically-acclaimed Jun release, Call the Comet. At The Paradise, he opened the show with Call the Comet’s second track and lead single, “The Tracers.” It is well received but the atmosphere goes from zero to 60 when he launches straight into the familiar Smiths classic “Bigmouth Strikes Again.” The room erupts and somehow, through magic that can only be weaved on a Fender Jaguar by Johnny Marr himself, that energy is never lost throughout the duration of the show.
Nine songs from Call the Comet are eventually woven into the set in between several Smiths songs and two (yes, two!) tracks from his ’90s-era collaboration with New Order’s Bernard Sumner, Electronic. And it works. This is the sound of Johnny Marr. His version of “Getting Away With It” quite possibly outshines the original (sorry, Bernard). New tracks like “Hi Hello,” “Walk Into the Sea,” and “Hey Angel” flow seamlessly alongside “The Headmaster Ritual” and “Last Night I Dreamt That Somebody Loved Me.”
The reverence that the audience holds for The Smiths is palpable when Marr revisits his former band. Fans know there’s a snowball’s chance in hell of getting a Smiths reunion and Morrissey continues to mortify us with his increasingly blatant right-wing statements. So when we can sing along to old favorites with Johnny Marr entirely guilt-free, it’s an enjoyable experience. The room’s exuberance suggested, very loudly, that the presence of a certain Mr. Stephen Patrick was not missed as Marr took center stage to own those quintessential songs. They are, after all, just as much his as they are Morrissey’s.
It’s clear that with each tour since embarking on his solo career five years ago, Marr has evolved as a frontman. He appears more confident, willing to sling his guitar behind his back and almost dance at certain points during the set. But obviously, Johnny Marr is too cool to dance. It’s hard to overestimate the level of cool that radiates off of the man, perfectly visible even from the very back of The Paradise. It must be that magic again.
After playing a nearly two-hour long set, Marr delivered a four song encore of “Rise,” “Spiral Cities,” “There Is A Light That Will Never Go Out,” and “You Just Haven’t Earned It Yet, Baby.” And even with Monday morning looming on the horizon, the crowd remained enraptured throughout.
To die by your side? Well, the pleasure and the privilege is ours.
Photos by Kayley Kravitz for Vanyaland; follow her on Twitter @britpopgirl.