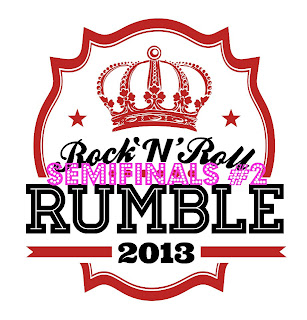 There were many cancelled and postponed events last night around Boston, and for good reason. Around the time a decision needed to be made on whether or not to host a show, party, event, whatever, Boston was engaged in a citywide lockdown. And while the situation resolved itself around 9:30 pm, leading many out into the streets to “celebrate,” by then it was too late to reverse decision and suddenly open shuttered businesses. One of the first shows to announce postponement yesterday was the Rock N Roll Rumble, whose semifinal Night #2 was set for T.T. The Bear’s Place in Cambridge.

Most of us were not yet settled emotionally from the night before, Thursday evening, where news of an MIT incident started circulating during the Daily Pravda’s set, and things culminated after Lifestyle’s headlining performance with the entire room watching the news broadcast, live from Watertown, on the TTs bar television. The 7-11 that was involved in the madness is a few blocks from the venue, but I really don’t think anyone at the Rumble knew exactly what was going on. I walked outside to Brookline Street at one point, I think just before Lifestyle, and there were choppers over Central Square. It was an insane night.

The winner was announced after the last band played, I think just before 1am, but I’m unsure how many people heard it: Glenn Yoder & the Western States took home the prize, and deservedly so. Guitarist Jeff Katz stole the entire evening with his efforts, and roots-rock gems like “Pretty Little Girl,” “Everything You Want,” and “Younger Brother” (one of my favorites from any ’13 Rumble band) showed why Yoder’s Western States could win the whole thing. All are off his recent LPJavelina.

But now that the dust and panic has settled, perhaps unsurprisingly, the Rumble is one of the first events to announce their new rescheduled date for Night 2, keeping the rock moving forward: Night 2 of the semis will go down Monday, April 22. Same bat-channel.

It’ll feature previous Rumble prelim night winners Eddie Japan, Camden, and the New Highway Hymnal; wild card band Twin Berlin; and a new twist due to scheduling. There was a show already planned for Monday at TTs, but coincidentally, the headliner is a Rumble alum and efforts have been combined.

In an effort to make good on the date as soon as possible, and fit it in before the scheduled Finals on Friday, April 26, we are pleased to announce that we will resume the Semifinals this Monday night!

We worked it out and TT the Bear’s was able to come up with a timely resolution. Randy Black (who is a 1982 Rumble winner with his band Limbo Race!) and his band the Heathcroppers have been invited to do a special opening set. Many thanks to Randy, as well as Brendan Boogie and the Broken Gates and Tsunami of Sound, for graciously allowing us to have their previously scheduled night. Thank you, Richard Bouchard, thank you, Kevin Patey, thank you Bonney Bouley. We really appreciate it.

Due to the special circumstances of changing dates and out of state travel, the wildcard band Twin Berlin has been moved from the first slot to the last. Rather than upset the entire night even more, I made the decision to swap the two bands. Probably another first for the Rock ‘n’ Roll Rumble history books.

Please support all of these bands – for their graciousness, for their flexibility, and for their understanding.

8:45pm – Special opening set by Randy Black and the Heathcroppers