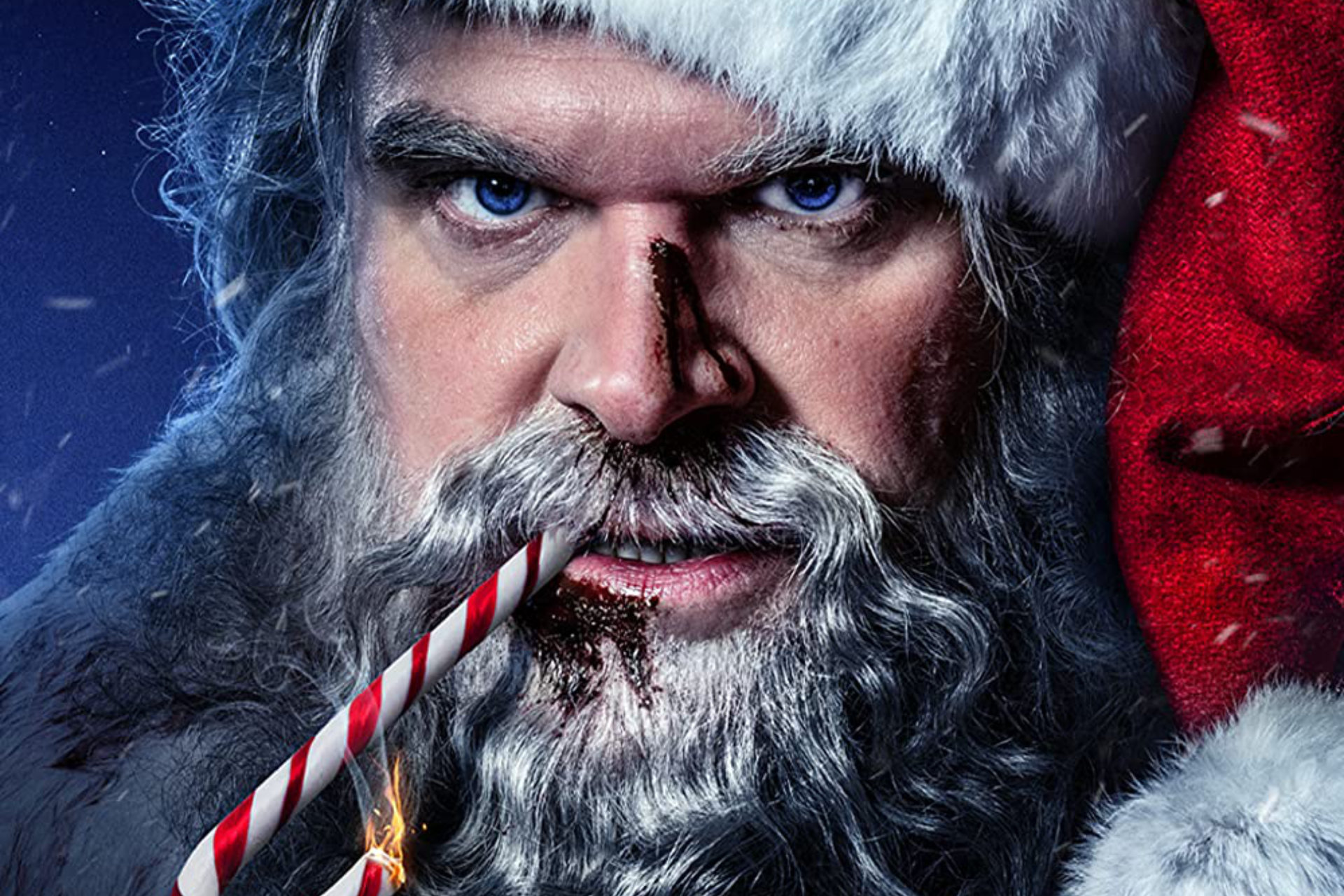 For how much we debate whether it is or is not a Christmas movie, rarely is it asked: Why are folks trying so desperately to cram Die Hard into this subgenre? Now, don’t say “it’s set at Christmas!” because, yes, we’re all aware of that fact. But the Christmas movie moniker, like all genre qualifications, has specific connotations to a larger set of shared traditions and values that operate within the construction of most of the films that are grouped under this banner, and Die Hard being included among them offers a kind of Reddit-brained retort to the things one might associate with them. Christmas movies aren’t about mistletoe or presents or socks, they’re about expressions of unrestrained sentiment — even the most cynical (A Christmas Movie) or depressive (It’s a Wonderful Life) conform to the mean, as well as one of my personal faves, Joe Dante’s Gremlins, which has served me well as a stock answer over the years. Die Hard’s presence is an attempt to stick one’s dick in the mashed potatoes, which, depending on what kind of party you like to go to, can be novel or entertaining. But when repeated ad infinitum by folks, it starts to get pretty annoying, usually around the second time, to say nothing of the marketers who have seized upon it. However, at least one good thing has emerged from this line of thought: Tommy Wirkola’s Violent Night, which is an attempt to make Die Hard into a proper Christmas movie by putting Santa Claus — yes, the real holly-jolly fat guy — into John McClane’s shoes for a midnight helping of cookies, milk, and a whole lot of ass-kicking. And he’s all out of milk and cookies.

Admittedly, David Harbour’s pretty far from one’s traditional conception of Kris Kringle (provided you’d avoided enough of the “Santa-the-badass” media over the last 10 years, like that Netflix animated film or Grant Morrison’s Klaus) — his belly is more of a lump, hard muscle shrouded in the kind of fat that a Russian heavyweight puts on to make weight, and his attitude is much closer, initially, to Billy Bob Thornton’s in Bad Santa without the acidity that Terry Zwigoff underwrote the hysterics with. The joy has slowly drifted out of the holiday for him, thanks to a lack of magic (which is pretty hilariously blamed on video games and cash, demanded by the shitty kids he brings gifts to) and also through his lengthy exposure to the worst the world has to offer. He knows who’s naughty and nice, and boy, we are capable of some really naughty things. So, it’s kind of understandable that this Santa — a Norseman warrior given jolly joy-giving powers that he views as a kind of pure-hearted atonement — might drown his sorrows at the pub in between jots down the chimney. It’s in these opening moments that Violent Night is the closest to the movie I feared it would be, which is a Funny or Die sketch, complete with stunt casting, extended to 90 minutes highlighting just how fucking hilarious a Santa doing bad shit is. Between Bad Santa and SantaCon, we have more than enough of that kind of entertainment at our disposal, and it’d be kind of boring otherwise. But once the film’s pitch reel ends (and one can imagine financiers just throwing cash at this based on the first five minutes), it becomes something more interesting than you might think.

See, the problem I outlined with the Die Hard-as-Christmas-movie categorization is that lack of treacly sentimentality, which is often earnest, at least when it makes it to a screen larger than the one in your living room. This is why folks rebel so hard against the nature of the Christmas movie, and why they’ve become so scarce theatrically over the last decade or so. We live in a time specifically skeptical of good tidings of joy brought to us without a knowing wink and banter to assure us that the movie doesn’t really mean it, because that kind of feel-good cornball shit is taken seriously (even if it transforms into camp), and serious isn’t something we really do unless it is specifically sold to us as such. That’s where Wirkola’s stroke of genius comes into play: See, Santa winds up stopping at a heavily-fortified mansion in the middle of Connecticut, where Gertrude Lightstone (Beverly D’Angelo), one of the country’s shittiest Fortune 500-listed matriarchs, is having her gaudy Christmas celebration. Her suck-up daughter is there to contest for her throne as empress of an evil corporation, complete with her action-movie lead boyfriend and live-streamer kid to round out the whole shitty picture. Her son (Alex Hassell) is distinctly uncomfortable with all of the wealth he grew up surrounded by, and has done his best to insulate his daughter Trudy (Leah Brady) from it, even as he draws a paycheck from the same company and said paycheck is alienating him from his beloved wife. But beneath the mansion lies a safe full of millions of dollars, and the waiters and staff are actually there to take all of it. Once Scrooge (John Leguizamo), their leader, shows up and pops the security guard at the gate with a silenced pistol, the family finds themselves in the middle of a holiday home invasion, and Santa finds himself stranded and shit out of luck in an upstairs bedroom, the reindeer having been scared off by the gunfire.

What this means is that the kind of serious earnestness that is present and unadulterated in pretty much every sterling example of the Christmas movie is allowed to be there, by design, because it’s offset by the inherent ridiculousness of the conventions of the action movie being applied to it at all. Violent Night quickly reveals itself to be a remarkably earnest movie when it’s not stabbing dudes in the neck with icicles or beheading them with ice skates or having Harbour fold their legs backwards with a well-placed shot from a sledgehammer (Wirkola, being the man behind the Dead Snow franchise, excels at wintertime violence). There are some remarkably endearing choices made on a character level, especially how the friendship between Harbour and Brady evolves. Once Santa realizes he’s stuck, he contemplates just getting the fuck out of dodge before he notices that there’s a little girl trapped in that garish parlor with the rest of her estranged family, and decides to do what he can to save her. Once he’s dispatched a few goons, he gets a radio and discovers he can communicate with Trudy — who, by this point, is hidden in an attic — and you can imagine that they have a similar relationship to the one Bruce Willis and Reginald Vel-Johnson had in Die Hard. But the way Trudy gets her walkie-talkie is incredibly cute: See, Dad wasn’t able to take her to see Santa at the mall that year, so that night before all the shit goes down, he gives her the one he had as a kid, claiming that it’s a direct line to the Man in the Big Red Suit himself. Her joy from discovering that not only does the walkie work in ways her dad couldn’t possibly have anticipated when coming up with a charming-yet-bullshit substitute for father-daughter time but that Santa actually does exist is priceless, especially when contrasted with the events going on around her.

This isn’t to suggest that Violent Night doesn’t have intentional humor — it does, and often in a much more subtle and clever way than you might think — or compelling and well-filmed action and gore, but that the two are merely compliments to the kind of Christmas film that rarely makes its way past the Hallmark Channel these days. It’s remarkable how well Wirkola navigates these two modes and blends them together, despite the occasional misstep and an overlong middle section, and depending on how you look at it, it’s either a Christmas movie that’s deeply in love with action cinema or an action movie that really wants to rediscover the true magic of the season. Affectionate tributes to other Christmas films abound within it, with the most entertaining being a lengthy riff on Home Alone, which Trudy is obsessed with and which she models her defense after when a pair of the home invaders go to find her in the attic. It’s the same kind of slapstick, only with the tinge of gory horror that one has always thought about during the Home Alone films — wouldn’t a bowling ball to the head kill Daniel Stern? — but it isn’t too far enough removed from the sensibility of its inspiration to make it a full-on ironic revision. This reflects a lot of Violent Night‘s approach to its particular hybridization of genres: It uses as much as it can from the various thought experiments one might come up with about the Santa legend when applied to a scenario like this without ever losing sight of the fact that it is a Christmas movie and not just an exercise in ironic flippancy.

I’ll admit that my expectations for this one were about as low as they can possibly get, so they really had to go nowhere but up, but Wirkola’s made the kind of holiday film that I will definitely revisit whenever it’s added to the HBO line-up near Christmastime each year. And the fact that I’ll be doing so because of something more than it just being fun to watch David Harbour grunt and groan as he stabs a guy in the eye with a Christmas ornament makes this a surprisingly large success in my book. It’s a nice break from the monotony of Christmas Story marathons and Die Hard debates, that’s to be sure.