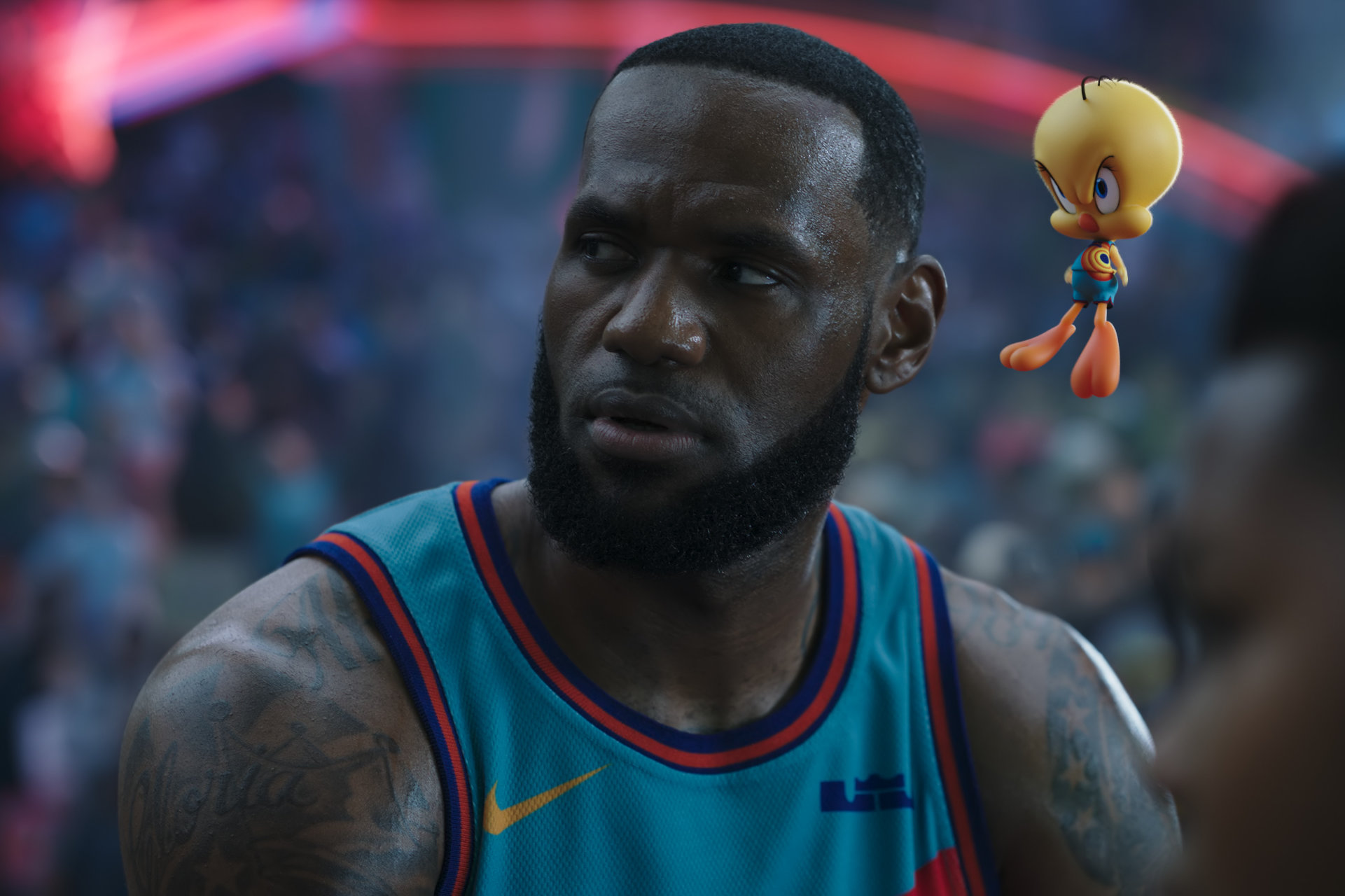 To be perfectly fair to everyone, and to somewhat soften the blow that’s coming in a sentence or three, I want you to know that I had the exact same reaction as (almost) everyone else when the very first trailer for Malcolm D. Lee’s Space Jam: A New Legacy dropped a few months ago. It looked like the kind of bizarre and garish film that you’d inevitably get after an AT&T executive, already stoked up on the potential performance of their recent acquisition, Warner Bros., and keen to rev up the Tune Squad for a brand-new generation, strolled into a pitch meeting with a host of facts and figures derived from focus groups, social media metrics, and a tackle box full of stimulants. To say that it’s an immensely cynical enterprise is an understatement, and it’s surprising that Warner Bros. had the restraint to refrain from mentioning HBO Max outright in the text of the film itself, but, midway through watching it, I began to wonder whether or not that was this particular movie’s fault, or, more precisely, the original sin of the original Space Jam. Both are mildly amusing exercises in brand management, with the original helping to soften the NBA’s, and specifically Michael Jordan’s, image — sure, he was a badass, the greatest ballplayer of all time (Go Heels), but he wasn’t cuddly, and neither was the league, coming out of the ’80s and early ’90s — while also ensuring the Looney Tunes stable would remain relevant through the ’90s, firmly stuck to the ribs of every newly-minted Jordan fan that left those theaters back in 1996, held right near their hearts. It worked like gangbusters, and ensured you’d see Bugs Bunny or the Tazmanian Devil on t-shirts for the next 10 years, ones perhaps purchased at the WB Store at your local mall.

It’s somewhat easy to forget that the majority of the Tunes output in the ’80s and ’90s came from theatrically released and hastily-cut-together cartoon compilations, nostalgiac revivals in the vein of That’s Entertainment that never sought to make a case for their relevance and, in the process, also vandalized legitimately brilliant cinema. Space Jam brought them back to the cultural forefront in a big way before it all went tits up in 2003 after Back in Action underperformed at the box office. So, from a financial standpoint, the Tunes stable is in a spot similar to that of the Muppets: Their parent company now has no idea whatsoever to do with them, (though Disney, at the very least, did the smart thing and made their most valuable work — The Muppet Show — available to stream), and a new Space Jam, one that could piggyback off of the global love for basketball that’s arisen over the decades since the original film, while also inuring new audience with a love for these characters, read like a good idea, especially with the “new” face of the sport, LeBron James, at its center. That’s all well and good: It is what you are signing up for when you buy a ticket for a Space Jam film, unless you’re hoping it’s about martian jelly-making, which, well, I’m sorry that your niche taste hasn’t been catered to by Hollywood. But where Space Jam: A New Legacy falters is its attempts to expand that deep-seated love for the Looney Tunes that its audience has to the whole of Warner Bros, and it causes the film to lose whatever modest amount of focus it had to start with and bloats it to an unbearable length.

There’s an amusing — if not entirely cogent — conceit at the heart of Lee’s film: LeBron James (James), a famous basketball player, is sucked into the world of the Tunes not because of, say, the Mon-Stars returning or whatever, but because an algorithm demanded it. Anthropomorphized by Don Cheadle, the algorithm’s at the heart of the Warner Bros.’ digital media library, where all their fictional characters live in server farms like they’re post-human consciousnesses in Black Mirror‘s “San Junipero,” and he sees James as an opportunity: It can leverage his superstardom and that of the properties and “become the true King” or whatever. The point is, the film knows what it’s doing, somewhat, and there’s an amusing contrast between the visceral and emotional connections that we have with the works cited here — Casablanca, Mad Max: Fury Road, the DC superhero stable — and the procedurally-generated horseshit that Cheadle’s character comes up with. All that talent, all that computing power, and all you get is a basketball game. A basketball game that is, in fact, stolen from James’ fictional son Dom (Cedric Joe), who wants to program video games instead of playing basketball like his patriarch and older brother but is making a basketball (video) game of his own. Cheadle kidnaps Dom in order to force James to play the game and tempts the kid with the chance to be able to school his dad at his own game. As far as Faustian bargains go, I am pretty sure that’s an unimpeachable one for a nine-year-old.

So, James is banished to Tune World, which has been all but abandoned by its inhabitants, save for Bugs, who is doing his best to stay sane while being The Last Tune On Earth. Akron’s favorite son recruits the Rabbit to help him get a team together, and, of course, this means getting the gang from all the various properties that they’ve been pawned off to. Yes, they visit lots of worlds, and it’s moderately amusing to watch them do so, especially since James’ form changes depending on where they land: In Tune World, he’s a cartoon; in DC World, he’s the Robin to Bugs’ Batman, and so on and so forth. Problem is, there’s still an hour of movie left by the time everyone gets together and they start montage-ing, and I’m sure even the most ardent fans of LeBron — you know, the ones who thought The Decision was excellent prime-time viewing — or the Tunes will have tuned out by the time that a variety of costumed characters from all across Warner Bros.’ various films and television shows come streaming in, Ready Player One-style to watch James and the Tune Squad face off against CGI superpowered versions of Damian Lillard and Anthony Davis, among others. That’s when the digital effects work begins to overwhelm everything, and the brief moments of faux-cel animation strewn throughout start to feel like a blissful, half-forgotten dream compared to the CGI monstrosities that the Tune Squad becomes because Cheadle’s character demands it. There’s even some recognition of that ugliness in the film itself, despite how “expensive” it may look, as Daffy Duck says. It is as not true to these characters as the Loonatics were back in 2003, when they tried to make X-Treme Goth Tune Heroes happen.

Again, there’s the argument for authenticity, and where the first Space Jam was about you having a little of MJ in you, even if you don’t have the Special Sauce, A New Legacy is ultimately about being real — authentic — for yourself and others. James’ accomplishments on the court are as incredible and as unimpeachable as those of animation gurus like Tex Avery or Chuck Jones, or the films of George Miller or Michael Curtiz, or the work of guys like Jerry Siegel and Joe Shuster, and contrivance is no way to properly pay tribute to these great feats and/or works of art. It’s a hell of a choice to make your own thesis statement your undoing, and I kind of admire Lee and company for straight-up admitting the outright uselessness of this endeavor in the grand scheme of things. In our IP-saturated era, it’s an interesting corrective to see the ethoses of executives at these companies skewered as if they were themselves being hoisted by their own petards, and it is legitimately the last thing that I expected out of a Space Jam movie. So, while I’m not going to argue that this is particularly worthwhile cinema for anyone but the most die-hard Lakers fan or folks under the ages of 15, I will say that Space Jam: A New Legacy isn’t the antichrist (besides, in a biblical sense, wouldn’t that be one of the directors who cash in their indie cred for a shot at a Marvel movie or something?) and it is, frankly, not worth getting mad about. Moreover, it lives up to the odd and already profit-oriented precedent set by the original, though I doubt it will accumulate the same kind of cultural cachet that will make it a hit with Allston frat boys 20 years on like MJ’s did.