‘In the Heights’ Review: The perfect film for the moment 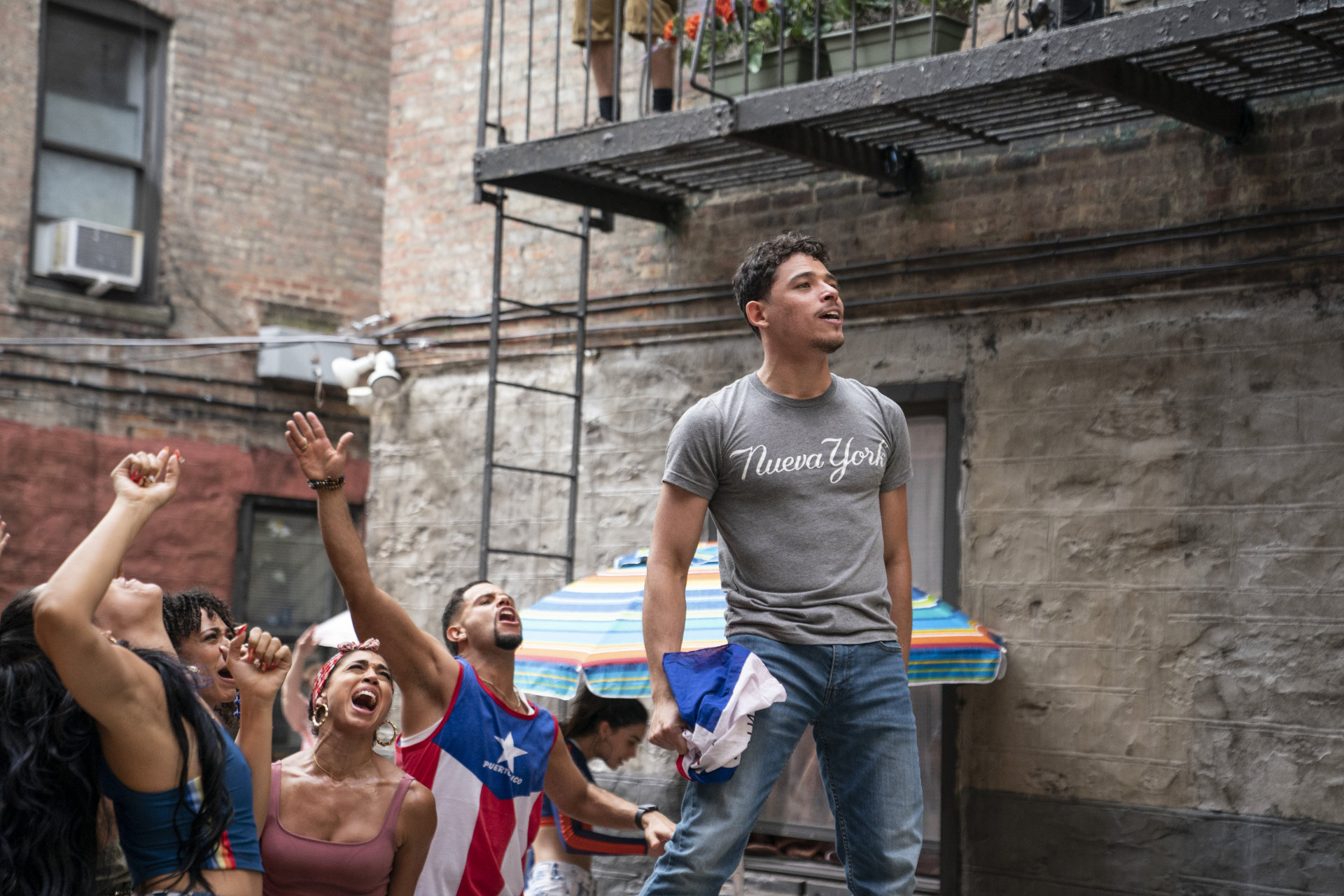 There are very rarely “perfect” films, and I’m sorry to disappoint you if you’re hoping that I’m going to say that Jon M. Chu’s In the Heights, the new-and-hotly-anticipated adaptation of Lin-Manuel Miranda’s breakout Broadway hit, resides in this elusive category for me (though, honestly, who gives a good goddamn what I think?). It doesn’t. Hell, one might even take umbrage with that framing at all — of course all films are imperfect, especially to those who make them and to those who make a living cataloguing their flaws for YouTube audiences — but we all have them indexed deep inside our brains somewhere, a master list of the media that stirs us and move us and inspire us. There is, perhaps, something far more elusive and interesting than simple, general perfection or timelessness, and that is timeliness. There is such a thing as a perfect pairing of moment and movie, and In the Heights is our most recent example. Filled with magic, charisma and joie de vivre, Chu’s film reminds one of the truly important aspects of life after a year in which, no matter what your circumstances were, you felt, on some level, the lack of it: Community.

Framed as a tale told by our protagonist to a group of kids on a hot day on some unknown beach, we’re introduced to the daily life of bodega owner Usnavi (Anthony Ramos), an immigrant from the Dominican Republic who has made himself a home in Washington Heights, and we’re introduced quickly to the people in his neighborhood. His younger cousin, Sonny (Gregory Diaz IV), works with him in the store after school and tries to coax Usnavi into talking to the girl of his dreams, Vanessa (Melissa Barrera ), a nail tech who wants to move downtown to be close to the high-fashion world she hopes to be a part of one day. But Usnavi’s heart is set on closing up the bodega and getting out of the neighborhood that he loves so that he can take over his father’s old bar (recently devastated in a hurricane) in the D.R. and relive what he considers to be the best days of his life. That means, however, leaving every one of the people he’s come to love so dearly behind, even if his absence may prove to be catastrophic for them. Still, his dream calls to him, even as he counts the reasons not to leave.

There’s Benny (Corey Hawkins), Usnavi’s best pal, who moonlights a taxi dispatcher while dreaming of business schools and making something of himself. There’s the object of Benny’s affection, Nina (Leslie Grace), who has just returned to the neighborhood from her first year at Stanford frustrated with the isolating experience on the opposite coast, but who doesn’t want to disappoint her father (Jimmy Smits), who is also Benny’s boss, who has already sold half of his business to finance the first year of her education. And there’s “Abuela” Claudia (Olga Merediz, who should not be surprised if she finds herself on the Best Supporting Actress ballot this year), who’s lived in the neighborhood ever since her mother immigrated from Cuba in the ’40s, and who, instead of having children of her own, adopted the whole block in spirit and raised Usnavi after his parents passed away. Each member of the ensemble is given true TLC: Chu, Miranda, and screenwriter Quiara Alegría Hudes take their time in introducing us to all of them in the lead-up to the film’s climax. That’s when summer blackout, one that will change the course of all of their lives, will happen, whose occurrence looms over the first half of the film like a dark cloud, teased to us by title cards counting down to its arrival.

That event is also when my main issues with the film, up to that point, were addressed and rectified. Two of Chu’s choices, made early on in the musical sequences, were somewhat frustrating to me. First, his admirable decision to shoot the film on location in Washington Heights directly limited the film’s aesthetic to the real world’s rather than the impressionistic settings found in other musicals (an often undervalued choice made by masters and forgotten by modern filmmakers, which is part of the reason its half-hearted evocation in La La Land proved to be so stimulating for a lot of people) and, consequently, limited some of its visual imagination. Second, Chu’s editing owes a lot to music videos and action filmmaking, which is a difficult fit here given how much there is going on in each sequence. It’s all quick cuts and shifting perspectives, which manages to snuff out all the good work being done by the dancers at the margins, and steps on the work and choreography being done by his leads. So, you’ll admire the scope of a song like “96,000,” which features the neighborhood, having left work behind on the hottest day of the summer to sit by the pool, puzzling over the news that someone bought a winning lottery ticket from Usnavi’s bodega worth $96,000 and wondering what they’d do with it, but feel a little left out by the execution given how scattered it is — it’s good, one might think, fully sustained with the film’s vibe thanks to the impossible charisma of its actors, but it could be better.

That all changes for the characters of In the Heights when the blackout hits. When the power company fails them, the neighborhood comes together to supply their own light in the form of fireworks and family gatherings (it’s weird how much I kept thinking of John Cameron Mitchell’s masterpiece Shortbus during this sequence, given how it’s also about how communities respond to blackouts), but all isn’t totally right with the world. The next musical number, “Paciencia y Fe,” performed by Merediz, sees Chu descend entirely into a world of gorgeous, emotional fantasy, as Abuela dreams of the subways of old and the men and women of her mother’s generation as she makes a pivotal choice. His editing calms down, and his camera movement becomes focused: you can see what the dancers are doing, and what their movements are attempting to evoke. The lighting is focused and colorful, the set dressings are evocative, and when paired with Miranda’s writing at its most sensitive and honest, it is an authentically heartbreaking combination. I was a wreck by the end of the sequence, and it was the moment the movie fully won me over. Chu’s able to sustain the feeling he evokes and creates in this sequence through the end of the film, through another genuinely magical song-and-dance sequence, “When the Sun Goes Down,” a lovely scene between Hawkins and Grace that’s heavily represented in the film’s advertising — you know, where the pair trips the light fantastic on the side of a brick apartment building as the sun sets upon their neighborhood — and to the film’s joyous conclusion.

Perhaps it’s an odd thing to be reminded of John Ford’s masterpiece How Green Was My Valley when considering this story, but I see them as birds of a feather, no matter if the plight of Welsh coal miners couldn’t be further from the subject matter of Chu’s film. Both, to appropriate Flaubert, are sentimental educations, though In the Heights isn’t a bildungsroman in the traditional sense, given that Usnavi’s nearly 30 at the start of the movie. But both are elegiac tributes to places the main characters either know or believe that they will be leaving, cultures and times and places that they know they’ll never be able to return to, even if they wanted to. Both characters lose someone dear to them and find themselves fully unmoored from the place that they consider a home in their absence. Chu, ultimately, concedes and refuses to let his film end on a massive downer, unlike Ford, whose tenderly crafted ode to the kind of innocence whose absence is only felt when it’s lost and doesn’t care if it’ll ruin your afternoon in the process. Yet it should be acknowledged their endings have different goals, with the characters in Ford’s film finding alienation and tragedy in their community, and Chu’s finding salvation in theirs instead, but the point remains: there’s a mournful melancholy underwriting each scene of joy, the sensation of sand dripping out of an hourglass containing the memories you treasure the most.

In a way, In the Heights is a celebration of the fact that those memories can be made at all with friends and the community in the place that you call home; that a place like Washington Heights can exist for each of us no matter which zip code we live in. And after a year and a half of feeling its absence, which was experienced by some in large ways and others in very small, given how inequitably our current situation treated people of different wealth and social strata, it is genuinely nice to be reminded of unabashed small joys. A conversation between friends at a bodega, a day at the pool, a hot night in a bouncing club, playing games with your loved ones, falling in love: These are the things you’ll mourn the most later on when the time has come and your life has changed, the ephemera of community lingering in the air like cold air, full of condensation, emanating from an open freezer door. How hot was your block.