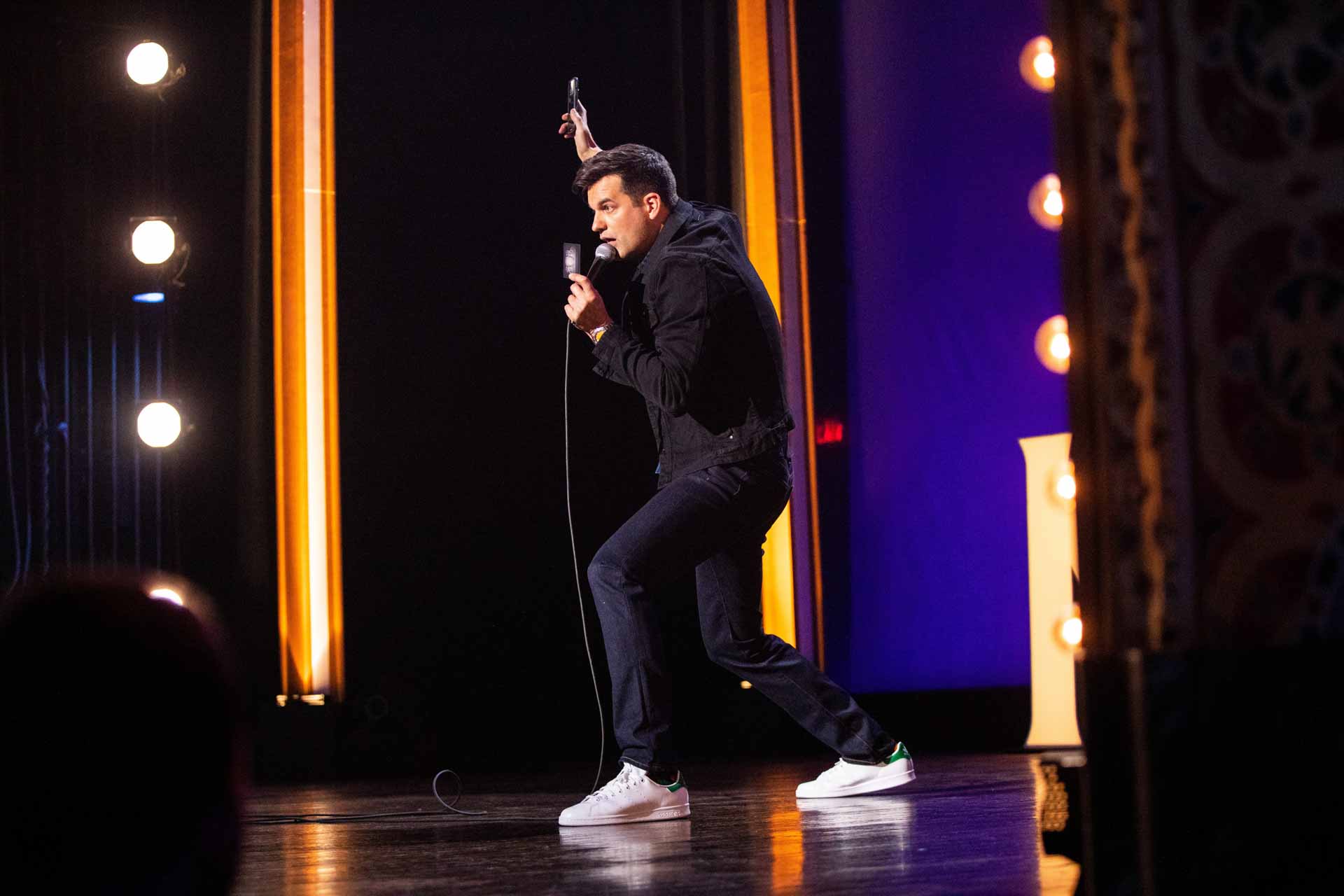 After 15 years on the comedy grind, Michael Kosta finally has his first stand-up special at the ready. And to celebrate the occasion, he’s retraced the steps of his long journey to pay homage to the cities that shaped him.

With Detroit. NY. LA., which premieres on Comedy Central tonight (December 11), Kosta goes coast to coast to make the most of his debut special, and while he slings a deep mix of life stories, observations and his views on some cultural norms, he’s just looking to offer a good hour of comedy that will give people a chance to chill out in their living rooms for an hour at the end of the night, forget about stresses for a little while, and just laugh.

“It feels strange, like a bad time to release a comedy special because I’m basically, through the title, encouraging people to travel to those places, and it’s also reminding people of a time that once was, when we could fit thousands of people into a room to hear one person speak,” Kosta tells Vanyaland. “But it’s also a good time, because it’s been a heck of a year, and my comedy is meant to make you laugh.”

It’s been six years since he released his first album (2014’s Comedy For Attractive People), but he’s been hard at work for the entirety of his career to prepare for the moment that has finally come, and he hopes his determination and dedication to his craft will shine through come premiere time.

“I’m ready to show people what I’ve been doing for 15 years,” says Kosta. “It’s not like I’ve been doing this for two years and I don’t know what to say or how to do it. I’ve thought long and hard about this, and I’m pumped to show it.”

Paying tribute to the cities that helped him grow as a comic may have been a key motivation in the planning process of how he was going to present his latest batch of material, but the different locations, as well as the overall vibe of the special, was influenced heavily by Kosta’s belief that there are entirely too many specials that aren’t really “special” at the end of the day. That’s not to say the material isn’t good, but Kosta wanted his moment to pop, and really offer something unique and different for the viewers.

In addition to that desire, Kosta also wanted to show an up-close example of what being a road comic really is, where he has to be consistent in his delivery, yet versatile enough to make crowds laugh, regardless of the room size or city he’s in.

“I think people forget sometimes that a stand-up comic’s job is to know the room and to deliver to that room,” says Kosta. “I wanted to show people that I can go to New York, have a great set and make the audience like me and laugh very hard. Then we can go to a theater in Detroit, which is a hometown crowd and they’re already rooting for me, but I can do jokes that relate to them and have the same reactions. Then we’re in Los Angeles, literally right off Melrose Avenue. These are beautiful people. There are agents in the audience and I am ridiculing them to their face, and they’re still laughing.”

Now, while his stand-up career and his position as a senior correspondent on The Daily Show are really two different worlds, Kosta has still been able to utilize aspects of his day job, which often includes working closely with comedic powerhouses like Roy Wood Jr. and Trevor Noah, to benefit his onstage approach.

“I think nothing prepares a stand-up comic for a special like performing stand-up, but getting used to performing at the highest level day in and day out like The Daily Show gets you used to is something you can’t replicate,” says Kosta. “Tuesday, I’ll be on a sketch, Wednesday I won’t be on the show, but then Trump tweets something, and then I’m on the show and I have to be ready to go in an hour. Then Thursday, I’ll be working with Roy Wood Jr. on something, and you’re just in it. Not to kiss my boss’ ass too hard, either, but getting to see Trevor come up with fun and unique takes every day, and seeing him work on his point of view of a specific topic? How can I not learn from that? It’s impossible not to.”

With all of this being said, Kosta is quick to acknowledge the difficulty of shooting a special in three different places, but in a way, that’s kind of the message he wanted to convey. Stressing that a “big break” doesn’t really come around unless you’re ready for it and you’ve put the work in for it, Kosta wants the special to leave viewers with the idea that comedy really is a difficult profession that takes time and skill to truly succeed at.

But, above all of that, Kosta just hopes that the material he’s presented will make people laugh, because if he can disrupt lives for even an hour to make people laugh, and help everyone who tunes in feel a little better, then he’s cool with that.

“What was fun about this special, and something that I loved, was to really see how it went from me being in Detroit with big lights and everything, to New York where I’m in a basement underground and it’s gritty and rough, and that reminded me of my life and my work schedule,” says Kosta. “That’s a testament to the producers that worked on it, like Sam Vollen, my creative partner that worked on it with me. We did replicate what it feels like to be a comic, and that’s what I wanted, and I’m proud of that.”