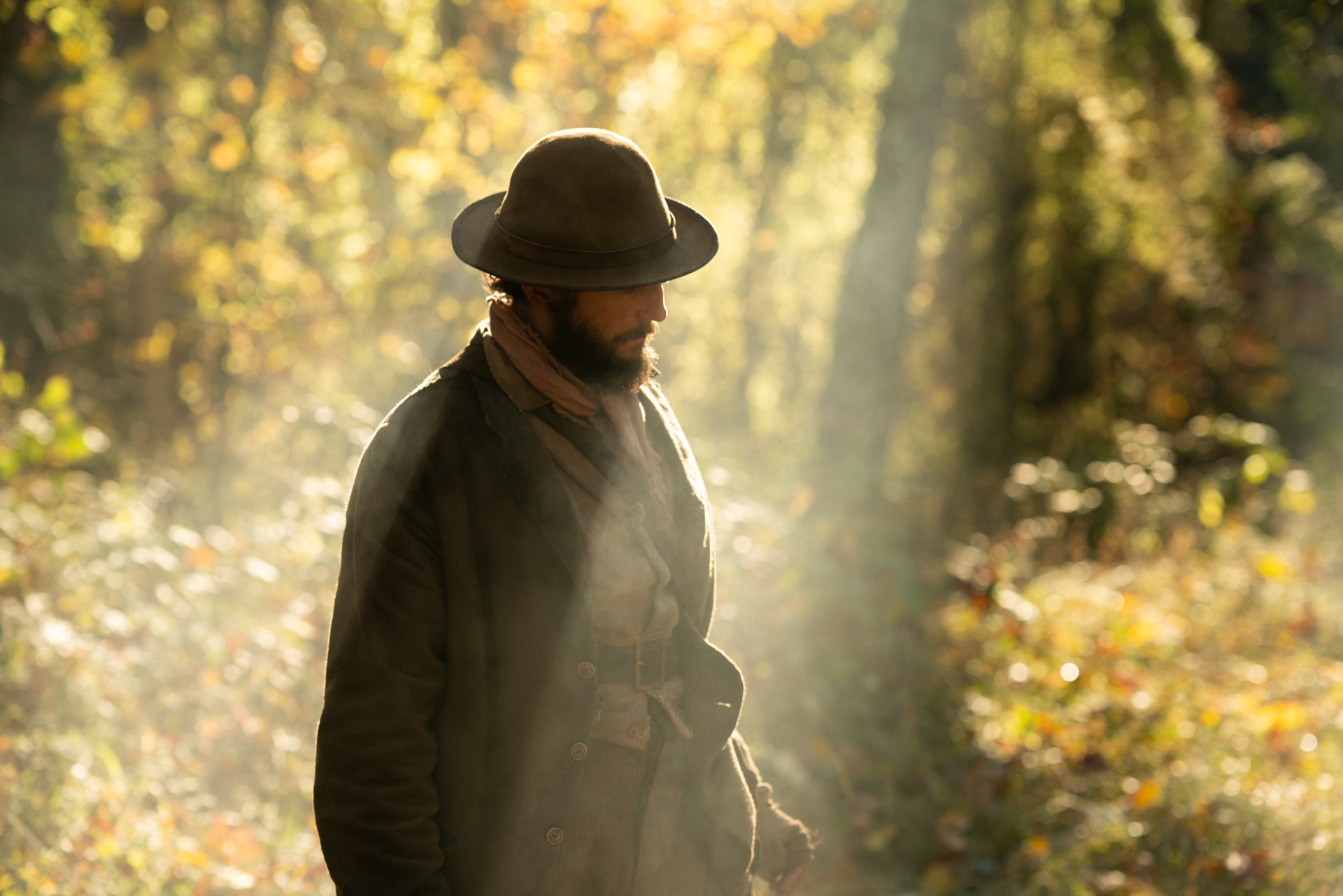 Kelly Reichardt’s First Cow is one of the best American films of 2020, which was why it was such a shame that its theatrical release back in March was cut short by the COVID-19 pandemic. Reichardt, the director of films like Wendy and Lucy, Old Joy, Night Moves and Certain Women, is a brilliant filmmaker, and First Cow may be her best, if not certainly most accessible, work to date.

A surprisingly gentle tale of frontier life in the Oregon territory, First Cow tells the story of Cookie (John Magaro), a gifted cook who partners with King Lu (Orion Lee), an enterprising Chinese immigrant, to start a small business making cakes and goods for those at a tiny outpost. The only issue is that they’re forced to steal milk from the only cow in the territory, owned by a rich landowner (Toby Jones), and they’ll certainly be imprisoned or killed if they’re caught. It is a wonderful little film, full of humor and life, and, now that it’s available on VOD, it has only grown more poignant as we’ve begun to isolate ourselves from others. Before the pandemic began, Vanyaland sat down with Reichardt at the Charles Hotel to discuss the film and her experiences in Boston when she was a student at the School of the Museum of Fine Arts.

Vanyaland: Let’s start off with a question about animals, I guess. We’ve got that maxim you hear often, about kids and animals being the worst to work with when you’re directing. What was it like working with the amount of animals that you had on this production?

Kelly Reichardt: I liked working with animals, I just like having animals around. I loved having that owl, I’ve never seen an owl that close before, it was fascinating. He was the size of a dog, he was huge! He went up in a tree and he was supposed to fly right down to his trainer. There had been these baby eagles around while we were shooting there, and he must’ve sensed it, because he wouldn’t come out of the tree. He was up there for a really long time. The whole crew was just completely silent, half the people are in awkward positions, we were there for nine minutes of running the film in total silence, all at the mercy of this beautiful creature. I don’t know, it does great things like that, it slows you down and makes a group of people who are geared towards moving quickly– suddenly there’s something that’s vulnerable and lovely on set. I like having a lot of dogs around and animals in general.

There’s definitely a morale component to that, too.

There is, especially the untrained animals, they keep everyone on their toes.

I wanted to ask you about the period setting this time around. You’ve previously worked in the frontier era before, how would you say that your work on Meek’s Cutoff impacted your decisions on this particular shoot?

Yeah, it felt really different, the time period felt really different. There were things like Lewis and Clark, I was glad that I had sort of done that research already, but with Meek’s, we had so many images to work off. In 1820, there’s no photography, so everything had to be read. We ended up working with this guy Phillip Clark, a researcher from London who was sending us some sketches that surveyors would’ve used. He sent us images which were helpful, but you’re not working with that exact period, so there’s this guess-timation. So you turn to paintings — not that there was really a lot of artists out in the area at that time or anything. That was different in the research, but also, the actors were learning a language that they were unfamiliar with, in this case, the Chinook jargon.

Right when we were starting our research, this museum opened near Eugene, called Grand Ronde, it was once a high school. It’s a very tactile sort of place with very generous people who opened up their library, they helped us find someone to help us with the language. They were keeping us at an arm’s distance at first, but then they were so generous. The canoe in the film is from their museum. That was a big help, research-wise, to be able to learn so many little thing s about acorns and how they worked into the life of — like, I knew about salmon, but I didn’t know about acorns. Just the fine details of things, that was super helpful. Every department is doing their own research, so it’s a bunch of shared information happening, and new information being worked into the script. There were times when things overlapped with Meek’s, but people weren’t coming out across the country yet, aside from a few trappers like Cookie. It was more people arriving from Europe or Russia or China, so you have the feeling of immigrants coming onshore. It’s a country of immigrants, and so it felt really different.

That’s one thing I’m interested in too, the contrast you have with other depictions of frontier life. If you take a look at something like The Revenant or whatnot, you’ve managed to make a film that’s way more tender and less visceral, but it feels more true. I’m wondering about the compassion and tenderness that you’ve baked into this product, it’s so brilliant in a way. Was that an intentional choice, to sort of offer a corrective to that narrative?

The whole thing is that, right? It’s about these two guys who are not like the strong men. Unfortunately find each other and they’re able to find friendship and share their ideas with each other and be in a domestic setting that they haven’t had before. Just the strength that it would take to survive in those times, in that place, being a vulnerable, thoughtful person. What would usually be the lead tough western guys have become muppets in this film where it’s constantly setting off a brouhaha. So the existence of that idea, that all of this built-up male energy of violence is what’s on the edges of these guys’ lives. They’re trying to be entrepreneurs, Cookie’s a craftsman. They’re just more interesting to me, personality-wise. In The Half Life, the King Lu character’s actually two different people that got fused together in the script. Those characters are so vivid in the The Half Life; that’s why I kept returning to these stories and those characters.

Now, in the Wendy and Lucy DVD, you curated a selection of avant-garde works that inspired your filmmaking. I was wondering if there were any avant-garde films that you looked to specifically for First Cow, in their tempo or tone.

Right, those films were an inclusion of conversation– I sort of have these two worlds I’m operating in, in the community that I’m making films with. So it wasn’t direct lines, but they as people and filmmakers influence my thinking of narrative, being that they’re non-narrative filmmakers. I thought — it’s dedicated to Peter Hutton, and the first shot is kind off an ode to Peter — I have his voice locked in my head about giving people time to see for themselves, and for lived moments to happen onscreen. So I’d say that there’s that, and his presence is big now. As far as non-narrative work, I would say — I haven’t talked about this much, here’s a scoop. When we were shooting the canoe scenes, used to be two canoes. The way I was shooting it was like we were in the water with them, and it was so complicated, and it was our one really failed day of shooting.

I knew it failed 10 minutes into the day, it was a bust, and we all just had to live through it. I had to reconsider how to do it. In my mind, I had Louisiana Story from Robert Flaherty in my head. “On a down day, I’m gonna look at that film, and that’s going to be” — I kept putting everyone off, like, that’s how we’re going to re-shoot it. I looked back at the movie, and in it, there’s a kid who has a pet raccoon, and the raccoon is swimming and pulling the canoe and I was like, “Oh, that’s not the answer I was hoping for.” Anyway, that led to a new way of shooting King Lu going down the river, which was much different than it was originally conceived. It landed in a much better place.

You mentioned [at the HFA screening] that you went to the Museum School in Boston and that you went to Brattle Theatre a lot. I was just wondering if there were any specific screenings or memories there that stood out to you.

At the Museum School, I randomly took a year of Indian cinema, which overwhelmed me completely. But the Satayajit Ray films I return to over and over again, they mean so much to me. I also had the Politics of Fassbinder, I had no idea who Fassbinder was at the time, and it blew my mind. Then I’d go to the Brattle Theatre and you’re seeing Hitchcock and Mann, and just more old Hollywood and b-movies that I hadn’t been exposed to, so there were many different languages. For many people my age, it was probably when Stranger In Paradise came out, it entered your head that somehow, you, too, could — and I’m sure I’m not the only person who had that thought, too. It was really a plethora of going from nothing to a lot.