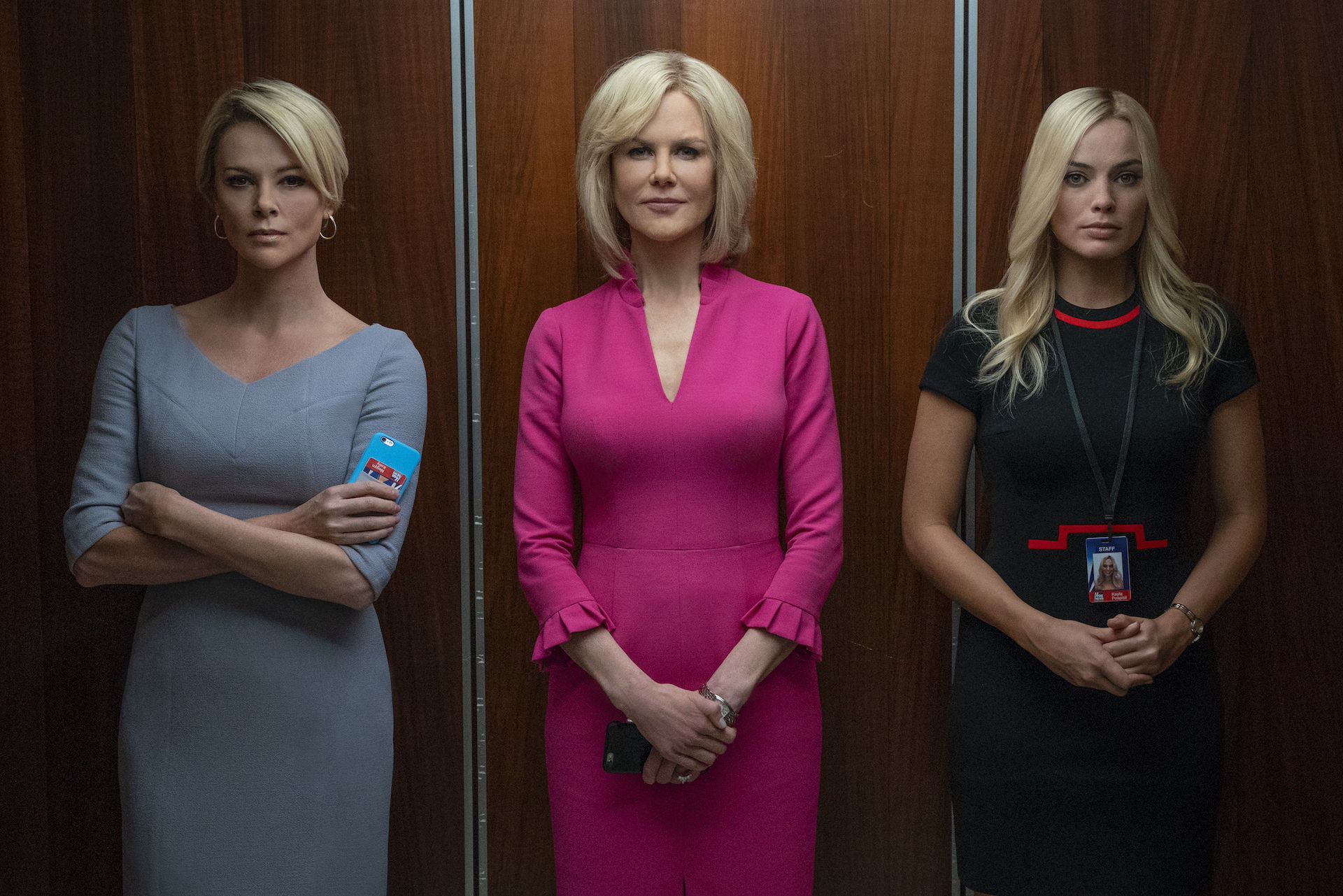 For what it’s worth, Jay Roach has been working the mediocre, milquetoast, liberal agitprop circuit for just as long as Adam McKay has — the two even met up with The Campaign back in 2012, which promptly disappeared into whatever cable channel hole every awful comedy does around three months after they come out — but he’s just never found the same level of big-screen success with it that the latter has. Perhaps it’s a matter of sensibility, as McKay’s works have always had some manner of political fire to them, even at their most oblique. One could never really accuse Roach of that, as his approach to humor has always been either come from its blunt-force delivery or hoping that said hammering was funny enough to wring a second laugh out of you in the sequel a few years later (this is the formula that sustained Austin Powers and the Fockers franchises for the better part of a decade). His work has often been at its best when he’s had some other creative mind to play off of — Mike Meyers, Ben Stiller — and the films that are most unabashedly Jay Roach are the ones that are the most forgettable, which is why most of his agitprop lives on HBO in the form of his television films, like Game Change, or Recount, etc., where the director’s limited reach suited itself nicely with the limitations of the form. Now, Roach has hit upon a topic certainly worthy of big-budget financing and a full wide theatrical release — the sexual harassment scandal that brought an end to Roger Ailes’ career at Fox News back in 2016 — and the final film, Bombshell, is a miserable waste of time.

For those not in the know, though it’s hard to imagine that you’d be interested in this movie in the first place if you didn’t have some sort of ideological skin in the game, Roger Ailes (John Lithgow) was a conservative cable news producer who almost had a sixth sense for getting ratings. He, alongside Australian news magnate Rupert Murdoch (Malcolm McDowell), was responsible for the creation and initial success of the Fox News network, which, in the aftermath of Reagan-era deregulation, brought Republican talking points into the home 24/7, delivered to you by attractive, charismatic people. But Ailes was a slimy monster back behind the scenes, abusing his staff physically, emotionally and sexually, and he got away with it for decades and decades. Bombshell is the story of the women who helped to hasten Ailes’ downfall — former Fox & Friends anchor Gretchen Carlson (Nicole Kidman), who sued Ailes and began the collapse after being fired from the network; anchor Megyn Kelly (Charlize Theron), a talented newswoman who began to reflect on her own harassment after receiving some from then-candidate Donald Trump; and Kayla Pospisil (Margot Robbie), a composite character who actually didn’t exist and is more just a collection of traits that the now-dead Ailes would have perhaps preyed upon.

The three leads are fine, I guess, and that’s all that anybody will really want to talk about with regards to Bombshell anyway. The accolades that Theron has received for her work here elude me, and even though she’s as reliable as always, her Kelly never transcends mere impression. Kidman is barely in the damn film, and it feels often like Robbie was told just to show up and be charming (that said, she doesn’t bungle the few very serious scenes that the film gives her). It doesn’t help that Roach seems to have brought the Austin Powers makeup team to assist the production, and the make-up here ranges from the unnecessary, like the misguided attempt to make Theron look more like Megyn Kelly (she looks like one of the reptilian Invaders from V right before their faces slough off), to the downright ridiculous. What did John Lithgow ever do to you, Jay? Why’d you have to put him through the Fat Bastard FX wringer? It’s not that the justification behind the choice is inherently bad — Ailes was a slug of a human being, and emphasizing just how gross the man was is perhaps a better tact than casting Russell Crowe as him — it’s so out of touch with Roach’s ethos here. There is, perhaps, a version of Bombshell that could have taken the elements here and transformed them into acerbic, acrid satire, as opposed to what is essentially semi-comedic true crime, though it would have taken a much sturdier hand in the director’s chair to make these things work, or, you know, a spine.

Bombshell, much like Roach’s HBO work, is a ripped-from-the-headlines potboiler meant to capitalize on controversy before it entirely fades from memory, much like Megyn Kelly has in the intervening years since her move to NBC, and it follows that recipe without deviating significantly. The stunt casting will get people to tune in/in the door (remember when Julianne Moore played Sarah Palin? Well, here’s Nicole Kidman with a fake chin!), the appearance of beloved liberal comedians doing mediocre impressions of political figures will probably wring a laugh or two out of people (Richard Kind as Rudy Giuliani is kind of amusing, sadly), and though it feints often at seriousness, it’s just beyond Roach’s grasp as a director to treat anything solemnly without one of the film’s broader aspects coming into conflict with it, like how Lithgow’s goofy appearance taints his threatening and gross scenes with Robbie. His reliance on incredibly dumb visual puns is painful — I nearly walked out when Kelly, when confronted with a crossroads in her career, is trapped in the Holland Tunnel with a “stay in lane” sign above her head, or when a Murdoch son, when told about the allegations, knocks over a single domino. He so desperately wants to be McKay, to educate and entertain at the same time, and hopefully leave the audience pissed off as they leave the theater (though Vice did that less intentionally than his previous film did) and it is just not in his ability to do so, even with Charles Randolph, the writer of The Big Short, penning the script here.

Roach is not a media critic, nor does he want to be one, and that wounds Bombshell gravely. As it stands, he has made a film about Fox News that refuses to engage with the political aspects of its subject matter beyond the lightest of digs, all of which are reserved for present-day hosts that our president seems to have an affinity for. It actively seems to miss the days when the network was “respectable,” when blowhards like Carlson (presented here as a centrist voice who falls out of favor with Ailes and company) and Kelly (whose “Santa is white” bit is brought up almost as an Easter egg) represented the company’s already-repugnant values in a more “civilized” light, and Roach devotes ample amounts of time to the network’s self-righteous justifications for its approach to news, such as a scene where Robbie offers an explanation for the network’s “Fair and Balanced” motto to Ailes himself before the worst comes to pass. If Roach had wanted to make a movie about sexual harassment and assault in media workplaces and not consider the political nature of such an enterprise, there is no lack of stories and situations for him to choose from. Because, like it or not, Ailes’ treatment of his female employees is inexorably tied to the whole of his enterprise, to the entire culture of the company, and to its politics. At least he gets one thing right: The Murdochs coming in and seizing the company away from Ailes’ grasp didn’t change a single damn thing about that news organization or how it operates. The cancer’s still spreading, and Bombshell is telling you that the treatment is still working.