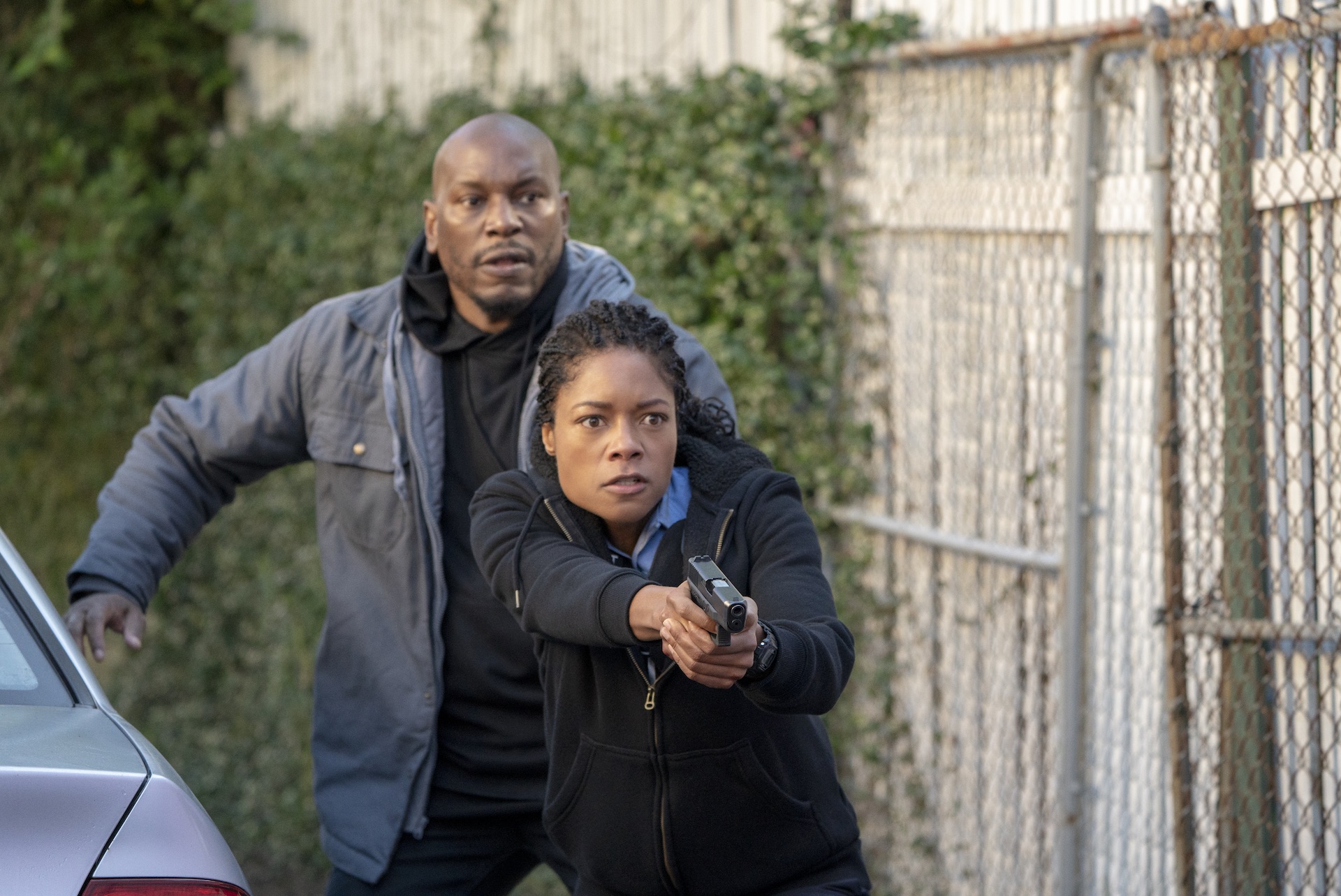 The premise for the cop thriller Black and Blue makes a lot of pointed references to hot-button current policing issues, and absolutely squanders the chance to say anything about any of them. Set in New Orleans by way of Los Angeles., given how weightless the setting feels, it’s about Alicia, a newbie cop (Naomie Harris) who grew up in the Ninth Ward before joining the army and then the force. In her third week on the job, the rookie stumbles upon a group of crooked vice cops, led by Malone (Frank Grillo), murdering three drug dealers in a warehouse. She captures the whole scene on her bodycam, and narrowly escapes death at the hands of Malone’s crew. She’s got to traverse the streets of her old neighborhood in order to get that footage back to the station, dodging low-level dealers like the golden-tooth’d Darius (Mike Colter) who think that she’s responsible his crew members’ murders, and the evil cops who are out to get her. Her only help comes from Mouse (Tyrese Gibson), a liquor store employee who is tormented by the police, even though they’ve practically abandoned his neighborhood. The two will have to decide what to do, and where their allegiances lie.

Directed by Deon Taylor, who had one decently successful thriller earlier this year in the Wild-Man Dennis Quad flick The Intruder (which you should absolutely stay home and watch instead of this), it’s surprising just how absent from Black and Blue that that director is in this final product. Its sub-DTV qualities make it more suited for basic cable than the multiplex, and its editing is amongst the worst I’ve seen in a film this year. The action sequences are relatively tension-free, full of quick-cut blur and CGI blood splatter, the latter of which is particularly egregious during a scene in which the blood on one victim’s face seems to disappear mid-shot as he falls to the floor. It’s too long, as well, running nearly twenty minutes over the natural expiration of its storyline, and it absolutely whiffs on the ending, coming close to sullying KRS-ONE’s “Sound of da Police” in the process. There are some high notes, though: Gibson, often miscast and misused in smaller movies, does some really solid work as the man whose life is going to be totally ruined by the kindness that he shows this cop; Grillo turns in a reliably frenetic performance; Colter is, once again, a pleasure to watch, and he has a fantastic scene with Gibson during an “interrogation,” in which the two discuss art history. But Harris (and the very funny Reid Scott, who is wasted here) feels miscast in a role that doesn’t utilize her wit or charm at all, and the blunt-force screenplay lets down most of the performers at one turn or another.

More importantly, the script is a thematic let-down, as well. We’ve moved into this odd position as a society where we refuse to see, even in our supposed “complicated” works, any sort of abstraction. It’s the epitomization of “All Lives Matter” as an ethos, attempting to emphasize the harm caused to the persecuted even while explaining it away as the actions of a few bad apples. And the end of Black and Blue especially feels like a failure of this imagination. On the one side is police justice, on the other is lawlessness; but between the two there are numerous ways that one can find a way to help. One of those, of course, as John Semley reminded us in this great New York Times Magazine essay, is for a person to become a Private Eye, the occupation of many a Blaxploitation hero back in the ‘70s, and Taylor’s film doesn’t even consider that as a possibility for its lead: she is, in the end, Blue, and that’s it. Perhaps a better film would have had Gibson’s character at its center: as a man caught between the Black and the Blue, and having to dodge fire from fire between the two groups, his dramatic arc and his resolution might have been more transformative or at least interesting to experience. As it stands, Black and Blue is the kind of centrist thriller that feels archaic in an era of increasingly unafraid political genre cinema, and it’s a real shame it’s not better.