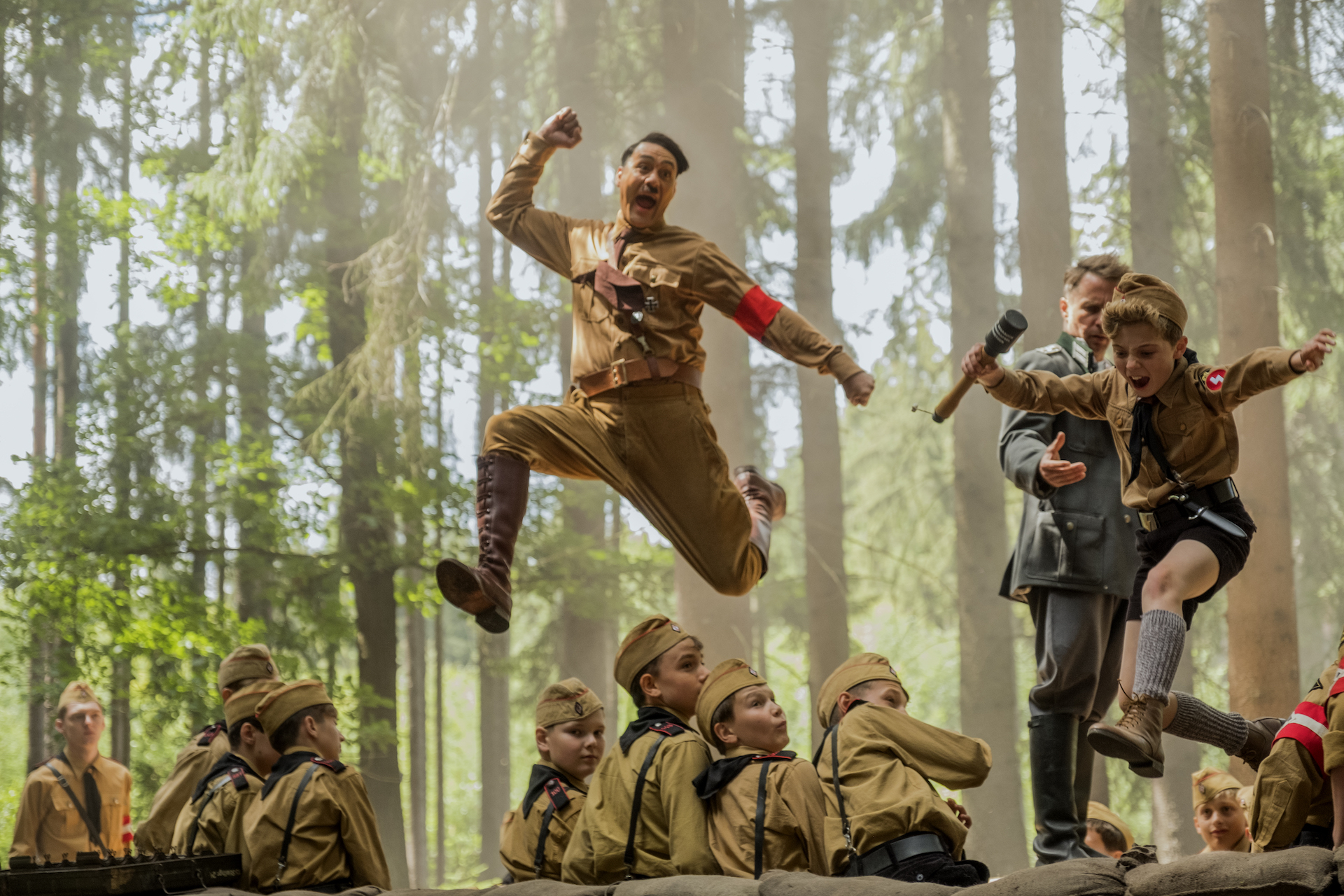 Editor’s Note: This review originally ran as part of our Fantastic Fest coverage.

When I was much younger and watching war movies on the afternoon blocks on AMC with my dad, he often told me about my grandparents’ own experiences in the war, which often served as a counter-narrative to the things unfolding on screen. My grandad was a G.I., my grandmother served in some capacity in the R.A.F., and both had seen their fair share of horrors. This didn’t stop them from enjoying movies about that period in history, but it did color their perspectives with regards to some of the more light-hearted media surrounding that period in history: My grandmother, for instance, absolutely detested Hogan’s Heroes with a fiery passion. As that generation slowly passes on into the great unknown, their stories are left to well-meaning people who often only understand the conflict by way of genre itself, and the stories slowly start to codify into convention. The truth of that experience gets lost in the celluloid image, and that’s not entirely bad or unnatural, even. Great art can, and indeed has, been made by those weaned on tales of Wayne and Eastwood bravery: Inglourious Basterds, The Thin Red Line, etc. And with every cycle of Serious War Films comes counter-narratives, serving to offer critique, explore and exploit those filmic styles; Taika Waititi’s Jojo Rabbit being merely the latest in a long line of comedic, stylized takes on that period in history.

It’s sort of essential to remember this fact when thinking about Jojo Rabbit, given that it probably would have made my grandmother as mad as she was when Col. Klink and company were on the air. Waititi’s film is a smart and relevant one, though it’s nearly derailed by a mid-film descent into maudlin melodrama, more befitting a film like The Boy in the Striped Pajamas than the kind of gonzo satire that the director might have hoped for. However, it’s not Heil, Honey! I’m Home, and deserves a fair bit more consideration than it’s going to get from certain sectors. Especially so with regards to its comedic imaginary Hitler, as played by the director himself, who offers sitcom-patriarch-like comfort and words of strength to young Jojo (Roman Griffith Davis), a 10-year-old boy who, much like thousands of other young children, gobbled up the Nazi party line as a way of making friends and finding some sort of identity. He begins the film by attending a Hitler Youth camp, led by the partially-blind Captain Klenzendorf (Sam Rockwell), where the normal activities of a sort of Boy Scout summer camp are twisted and perverted by this ideology — racist drawing exercises, live-fire grenade training, et cetera — styled much like a Wes Anderson project in its tactile, colorful on-screen organization. In fact, our protagonist earns his nickname by refusing to kill a rabbit as a part of a strength exercise, and his resulting desire to prove his bravery in a later contest results in him being severely injured.

He’s sent home from the camp to his doting mother (Scarlett Johansson), who is doing her best to raise her son despite her husband having disappeared in Italy and the powerful and influential forces of a regime that she detests governing his every thought. His childhood room is covered in propaganda, and he bristles at the fact that his scars and limp make him less than the Aryan ideal. His fervor only grows as a result of this, and he’s soon assigned to the party office to post notices and to collect scrap metal, all as his former friends are enlisted into the service to protect their little town. You see, things aren’t going great for Germany at the moment: It’s near the end of 1944, and the Allies are slowly pushing into the country itself, threatening to topple every ideology that Jojo holds dear. But one night, he hears an odd noise in the walls upstairs, and discovers that Elsa (Thomasin McKenzie, last seen astonishing audiences in Debra Granik’s Leave No Trace), a young Jewish woman, is living in a crawlspace in his dead sister’s room. Elsa, knowing that the boy has bought into the propagandist myths about the Jews, initially tries to frighten him into complacency, telling him everything he wants to hear about how he’ll suck his blood and how she’ll murder his entire family if he tells anyone. And, as you probably can guess, the pair grow closer, and much to the chagrin of his imaginary best friend Adolf, Jojo begins to question his country’s ethics.

This is where Jojo Rabbit has understandably lost a lot of other critics, as the transition from full-scale stylized satire to anti-racist drama, stacked with sentiment, is inelegant at best and maudlin at worst. Waititi makes some flawed choices, as well, taking us away from Jojo’s perspective at times and placing us with McKenzie and Johansson so that they can offer blunt commentary on events and give ScarJo a healthy chance for Oscar consideration (that said, she has one scene in the film, at a dinner table with her son, that proves that her chances would have already been pretty good even without the obvious stuff). It’s laden with all of the cliches that often sink films concerned with changing one character’s racist mind through controlled exposure to the people that they hate. But, most of the time, the young actors aren’t strong enough to mine through those cliches for pathos, and McKenzie and Davis are the exception to that rule. Davis is a perfect little Nazi — you’ll fear him and his blind idealism, and even hate him at points for his thoughtless cruelties — and McKenzie plays things so acridly that it’s a million miles away from other portrayals of similar characters you’ve seen on screen in the past. His change feels real enough, though it’s bound in some really frustrating emotional change. And when that third act hits, it does so like a ton of bricks — on the artier side, you can see a clear influence on Waititi from Rene Clement’s Forbidden Games, on the groan-inducing one, Life is Beautiful — but the pain is real enough as the tanks roll into Jojo’s small town.

The shift to drama feels like a bit of a narrative concession on Waititi’s part to the audience, so that the satire never quite has the punch it should: His first and third acts feel like they’re in an entirely different film, one that has some honest-to-christ edge to it. The acidic humor found in Waititi’s Germany and, indeed, his portrayal of Hitler as a Cosby-styled dad offering up words of wisdom (and his petulant anger at Jojo’s attempts to escape from it) is very compelling and entertaining, and as evidenced in his other work, he has a great sense of humor in service of a message or an emotion. The specter of the Aryan ideal looms harsh and heavy over every aspect of Jojo’s little world; from his failure to live up to it to the different ways that each member of the community feels crushed by its weight. Chief among them is Rockwell’s Captain, whose recent career work as a “redeemed racist” has been capably transformed into a meme by much of the film world, but that criticism feels a little bit unfair here, even if he’s playing a “good Nazi,” as many have decried. It’s odd how often I was reminded of A Hidden Life while watching this, given how diametrically opposed they are to one another in terms of perspective. This was a man who, unlike August Diehl in that film, couldn’t stave off the temptation of his society’s cancer, and his pigeonholing into this role as a “soldier” is eating him from the inside. His actions later on the film have palpable meaning and significance, and it’s kind of frustrating that people are ignoring his characterization, given how well it fits into the point of the film.

That point — about how fascism corrupts the mind and the heart in the absence of love and with the implicit threat of violence — feels (and I’m going to use a phrase I hate right about now) especially relevant in times where unchecked nationalism and blind fanaticism is on the rise. It’s interesting in how firmly rooted in the styles and perspectives of children’s cinema that Jojo Rabbit is, and it makes me wonder if Waititi really intended for us — the jaded, knowledgeable audience — to be its primary targets. There’s a certain level of Terry Gilliam’s methodology in something like Time Bandits here, in how Waititi refuses to patronize or talk to the younger viewers in an explicit way, and with how willing he is to put them through the emotional turmoil of that third act. And since the trivialization of this massive conflict, which made my grandmother hate Hogan’s Heroes so very much, is becoming truer and truer, not only through the War’s portrayal in the media over the years but by the very passage of time itself, Jojo Rabbit feels like a weird meeting between these two perspectives: One willing to indulge in it, while trying its damnedest to warn the audiences of the dangers of not taking its anti-fascist message to heart. It doesn’t always succeed at that, or at maintaining a consistent tone, but Jojo Rabbit feels like a necessary, warm-hearted mess, and it’s well-worth your time to take a chance on it.