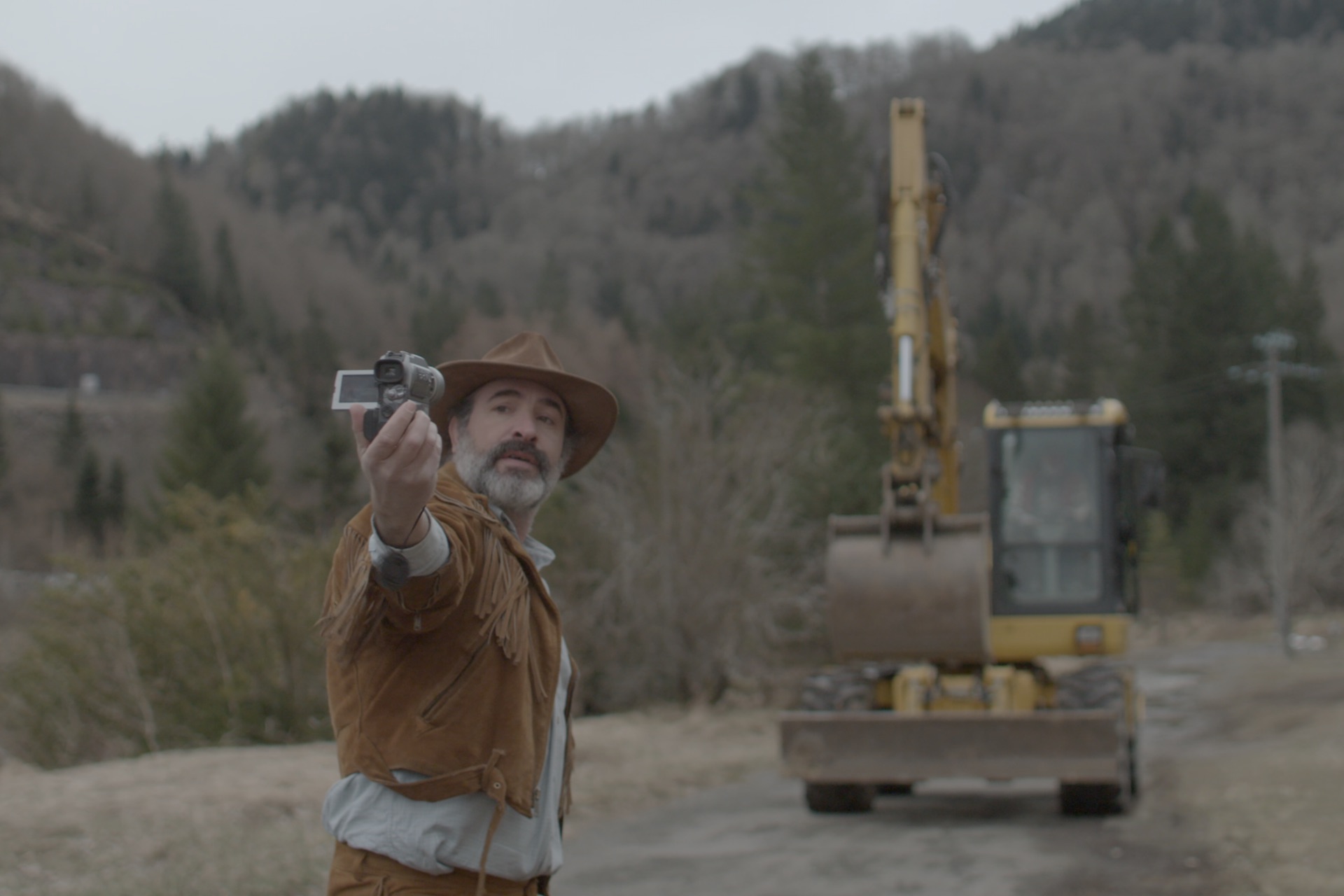 It’s no secret that I generally love Quentin Dupieux’s cinematic output (I can’t speak for his electronica career, however, or the success that he found when he used to release singles under the name “Mr. Oizo” a decade or two ago), and his latest film, the bizarre and hilarious filmmaking parable Deerskin, may be the first of his work I turn to when I’m trying to introduce neophytes to his work. Similarly high-concept to the rest of Dupieux’s oeuvre, Deerskin documents the psychological collapse of Georges (Jean Dujardin, in a performance well in line with his pre-Oscar-winning output in films like the OSS 117 series), a recently-divorced loser who has fallen in love with a symbol of bygone masculinity: A deerskin jacket, complete with hanging fringe, which he paid for in cash before heading into seclusion in a small town in the French Alps.

It’s there that he meets and lies to Denise (Adele Haenel), a local bartender who is awfully curious about the weird man who’s walked in to her sparsely-populated town. Looking to impress her and cover his ass, Georges tells her that he’s a big Hollywood filmmaker, looking to shoot a project in the area. After all, he did get a small DV camera along with his jacket, and though he doesn’t know anything about making movies, he decides to stick with the charade, even hiring the young bartender to be his editor (and taking hundreds of Euros from her in the process). That’s all well and good, and the more-normal aspects of the plot, in which the high strangeness is more in line with the sensibilities of a filmmaker like Jared Hess, give Dupieux a chance to show off his skills as a writer and as a director of actors, as there are plenty of genuinely funny moments before shit hits the fan.

But it’s when the jacket starts talking to Georges — or Georges pretends to be the jacket that’s talking to him, it’s left deliberately unclear — that things start to get weird. You see, the jacket has a dream of its own: It wants to be the only jacket in the world, no matter what it takes to get there, and it’s recruiting Georges to make its dreams come true. So, the budding filmmaker now has a concept for his project, in documenting his quest to rid the world of other kind of outerwear, and it only takes a couple of pushes for things to get very bloody. Fantastic Fest programmer Evrim Ersoy described the film as Dupieux’s Man Bites Dog in his introduction to the film, and while it’s not necessarily like that in form or substance — it’s not a faux-documentary, after all, nor does it get into the same ethical concerns that defined that film’s ethos — it’s relatively easy to see where Ersoy was coming from in his comparison.

Its focus is on creative and financial control of projects, a subject that Dupieux must know a great deal about, thanks to his uncompromising vision for his work. The jacket acts as a fiery muse, commanding Georges to do its bidding, and Denise, pushed down the chain of command, schemes to seize control of “the project” in order to make it marketable. Things can’t get too complicated thematically, however, as laying a message on too thick would be anathema to Dupieux’s freeform style, and the film’s breeziness is one of its main assets, making its 77-minute runtime fly by. I could have watched at least two or three more hours of this, easily, and it makes me wonder if Dupieux would ever bring his talents to a longford television program, as his style feels well-suited to it. Regardless, Deerskin is a lot of fun, and if you’ve tried to get into this admittedly divisive filmmaker’s work in the past and found it difficult to enjoy, I’d recommend you seek this one out.