Once Upon 1969: ‘Hello, Dolly!’ and the collapse of the movie musical 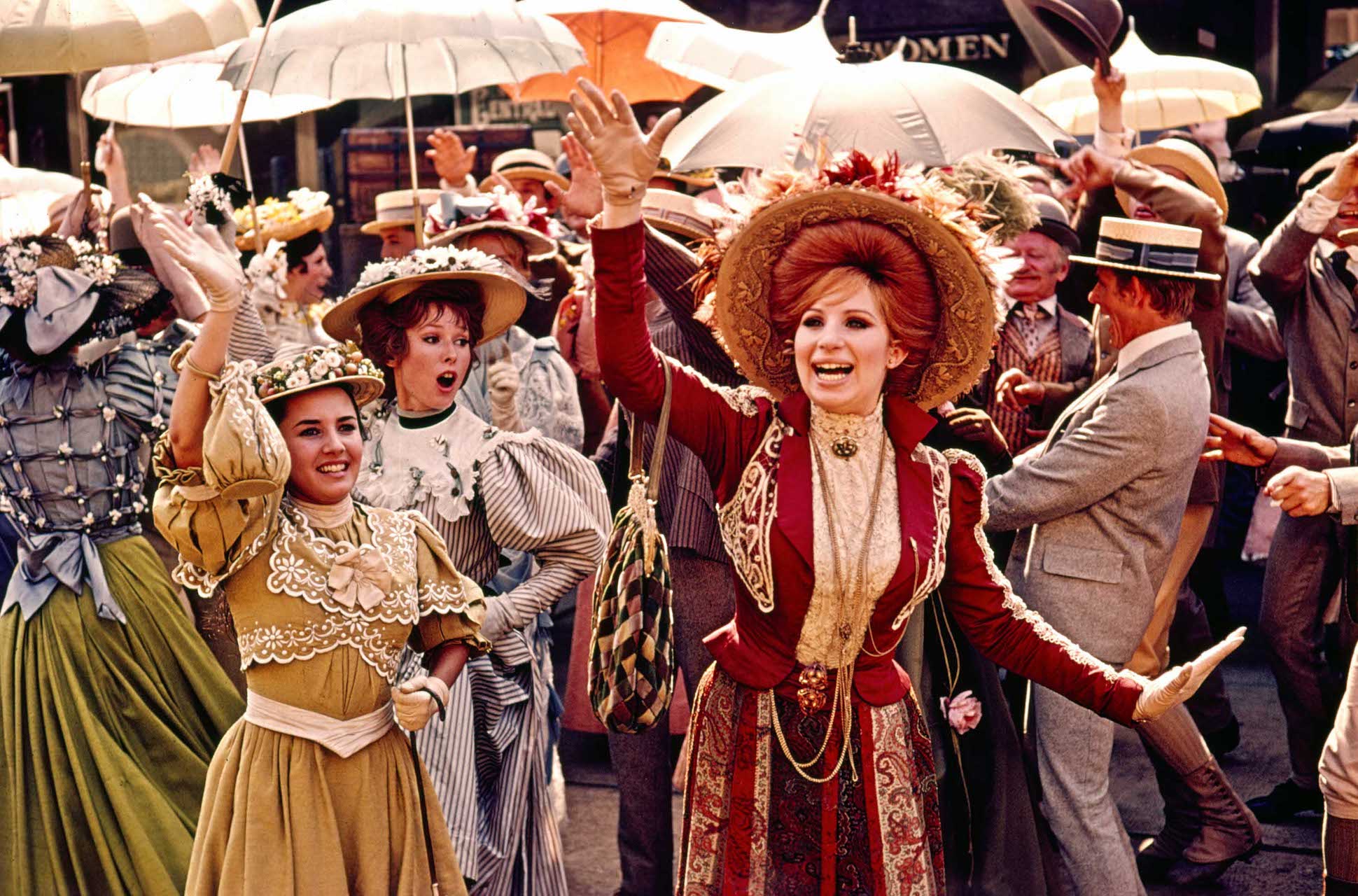 The ‘60s had been an incredible decade for the high-risk, high-reward musical: Since 1958, five of the 10 Best Picture winners at the Academy Awards had come from the genre. Hell, just the year before, Carol Reed’s Oliver! had swept through the Oscars like wildfire, claiming the Best Picture award alongside five other statuettes. But what few wanted to suggest was that the costs involved in making these large spectacles were growing out-of-control, and became a greater gamble: Either you’d win a statue, or you’d be out of a job. So, in 1969, studios kept churning them out, though they were growing thinner and thinner in comparison to their heyday.

Among them were the Peter O’Toole-starring musical remake of Goodbye, Mr. Chips, which had spent years getting to the screen; Richard Attenborough’s Oh! What a Lovely War, a deeply political World War I ensemble dramedy starring Maggie Smith and Vanessa Redgrave; and Bob Fosse’s Sweet Charity, a Shirley MacLaine-led musical adaptation of Fellini’s Nights of Cabiria. There were two Elvis musicals — The Trouble with Girls (and How to Get Into It) and his final film, Change of Habit — and the Peanuts gang made their screen debut in the animated A Boy Named Charlie Brown. As mentioned in my colleague Brad’s essay on the Western, Joshua Logan’s incredibly odd Paint Your Wagon hit theaters as well, where it was Dolly’s only real in-genre competition at the box office.

20th Century Fox’s Hello, Dolly! seemed to be fated for better things from the beginning. It was, after all, based on the incredibly successful stage musical, which in itself was based on Thornton Wilder’s The Matchmaker, about Dolly Levi, a young New York City matchmaker who is hired by Horace Vandergelder, a Yonkers “half-millionaire” who is in need of someone to convince his niece not to marry an artist. Dolly finds herself charmed by the man, and in need of some love in her life (she’s a widow, looking for a sign from her dead husband so she can move on), so she attempts to woo him. All the while, Vandergelder’s two clerks, who headed to the city along with Dolly, fall in love and have their own misadventures with two young women who work in a haberdashery. It’s hard to understate just how popular this musical was in the early ‘60s, but here’s one example: Louis Armstrong’s recording of the title track pushed The Beatles off of the top of the Billboard Hot 100 at the height of Beatlemania.

And as such, a musical would need to follow, and Fox wanted the rights badly — so badly, that they’d sign an agreement that they’d have to pay a fee if they wanted to release the film before 1971 or the end of the play’s run on Broadway, whichever came first — so they assembled their top men. It was to be directed by Gene Kelly, a legitimate screen legend, whose work with the Freed Unit back in the ‘50s helped to shape the genre into what it was. It was written and produced by Ernest Lehman, the writer of three of the previous decade’s classics — The King and I, West Side Story, and The Sound of Music — and it would star one of Hollywood’s brightest up-and-coming stars in singer Barbra Streisand, whose first film, Funny Girl, was soon to hit theaters. She would take over the lead role from Carol Channing, who originated it on stage, and would be paired opposite Walter Matthau as Vandergelder. But a year later, the film would barely make its money back and, eventually, it would fade from the public consciousness.

So, what went wrong? By all accounts, production was difficult. Costs ballooned over the course of preproduction and filming, eventually pushing the total budget of the film well over $28 million — roughly $210 million in today’s money when accounting for inflation — and the project just seemed to keep getting bigger and bigger. As Matthew Kennedy wrote in his history of the ‘60s musical, Roadshow!, “everyone, it appears, hated everyone.” Kelly and Lehman feuded, with the former apparently telling the producer and writer that if he “ever talked to [Kelly’s] actors again on the set, [he’d] kick his fucking teeth in,” according to Lehman. But perhaps he should have been grateful that he’d even still was on speaking terms with the director: by the end of Hello, Dolly!‘s filming, he and choreographer Michael Kidd wouldn’t talk to one another.

Streisand didn’t get along well with Kelly, as she thought he wasn’t particularly suited for the job of directing actors, but it was Matthau with whom she fought the most. According to Kennedy, the day after Bobby Kennedy was assassinated, Kelly had tried to get everyone to work through the pain, and that was when the mutual hatred really came to a boil. After Streisand suggested some changes to Matthau’s blocking during a scene, the actor angrily told her to “stop directing the fucking picture.” From then on, according to Matthau (via Kennedy), “there was a blow-up in which I also told her that she was a pip-squeak who didn’t have the talent of a butterfly’s fart. To which she replied that I was jealous because I wasn’t as good as she was. I’m not the most diplomatic man in the world, and we began a slinging match like a couple of kids from the ghetto.”

Now, plenty of films survive troubled productions, and many of them have gone on to be masterpieces. Hello, Dolly! wasn’t one of those cases, as, watching the film now, you can feel something off at its core. Perhaps it’s the odd romance between Matthau’s miserly “half-millionaire” and Streisand’s moxie-fueled matchmaker, which, aside from a couple moments of levity, never manages to make it off the ground. Oddly enough, the attribute that Matthau and Streisand both share is that they’re equally miscast in their individual roles. The former’s grumpiness only serves to hold him back comedically, and the latter’s fast-talking spunk is often incredibly hard to follow.

Unlike her male co-star, at least Streisand can sing, and she does kill in two of the film’s numbers: the lonely window lament “Love is Only Love,” in which she pleads with her dead husband to finally let her move on, and the song the film takes its name from, where she duets with Armstrong in a lovely little moment as the second half’s centerpiece. The supporting performances from Crawford and Lockin are the film’s most compelling, and their natural talent as dancers shows through often. Arguably the best dance sequence in the whole film is during “Dancing,” where Dolly teaches the two shop clerks how to cut a rug, and their unbridled enthusiasm gives the whole sequence an energy and a flavor not unlike the one you’d find in Kelly’s earlier work.

It is just so much, though. Hello, Dolly! feels bloated, and though its heavy excesses — from the costuming, to the location-shot sequences stretching throughout entire small towns — are entirely symptomatic of the era of studio filmmaking in which it was created, it does feel as though Kelly recognized that this would be the last musical he’d ever direct (he’d be credited as director on two more projects: A western-comedy called The Cheyenne Social Club and on the musical clip-show documentary That’s Entertainment, Part II). So, he through as much shit at the wall as he possibly could in order to see what would stick, and thanks to Kidd’s blocking, a whole lot of it does work in the moment. The first major number, “Call On Dolly,” in which we follow Streisand as she gives away her business cards before hopping on a train to Yonkers, is impressively blocked, and shot smartly.

The big showstoppers, “Before the Parade Passes By” and “Put on Your Sunday Clothes” are basically a visual blitzkrieg, here to overwhelm your senses with color and noise so that you’ll submit, but oftentimes one’s mind wanders to thinking about just how much money this entire sequence cost. Again, Kelly’s heart doesn’t feel in those moments, and it’s almost crazy how much the film perks up when the set-pieces get smaller. And, thanks to the two-and-a-half hour runtime, those moments slowly start to become less and less frequent as the film goes on. It’s such a disappointment to see how much potential there was here at its genesis, and it’s a tremendous bummer that Hello, Dolly! couldn’t be the farewell that Kelly wanted as a director.

After sitting on a shelf for a year, thanks to Fox’s weird negotiations for the adaptation rights to the film (the studio, which burned $100,000 a month due to interest on production costs, had to finally pay the piper in order to release it), Hello, Dolly! finally hit theaters on December 16, 1969. In the interim, Streisand had become a bonafide silver-screen star, having tied with Katherine Hepburn at the Oscars the year before for her work in Funny Girl, which would premiere a few months after filming on this project had wrapped. She would, of course, have a long and plentiful career in musical film, and eventually clone her dog. It was well-received critically and, thanks to its lead’s now-proven draw power, audiences did go out and see it, much like they had all of Lehman’s former classics. It’d wind up being the fifth-highest grossing film of the year, behind Butch Cassidy, Midnight Cowboy and Easy Rider. However, it would barely break even, given just how much the studio spent making the damn thing, and the three Oscars it would win that year, including one for Irene Sharaff’s colorful period costuming, would feel quaint compared to the haul that Oliver! had brought in the previous year.

The warning signs, it seemed, were finally there for the genre. The current method of production was unsustainable, but the studios pushed forward with new projects. Some would work (Fiddler on the Roof, Hair, Cabaret), most wouldn’t (there are few things audiences hate more than a revisionist musical, and Hollywood had to learn that the hard way). By the start of the ‘80s, the musical as audiences then knew of it would be dead. But, funnily enough, at least in one future, Hello, Dolly! would find one happy viewer: the robot WALL-E, who, in the Pixar film of the same name, would learn how to understand his feelings for fellow EVE from a dusty Betamax copy of the film found in the rubble of the ruined, polluted planet Earth. It’s almost fitting that, in a planet consumed and trashed by its excess, it’d be a relic of the genre at its most bloated and indulgent that would survive.