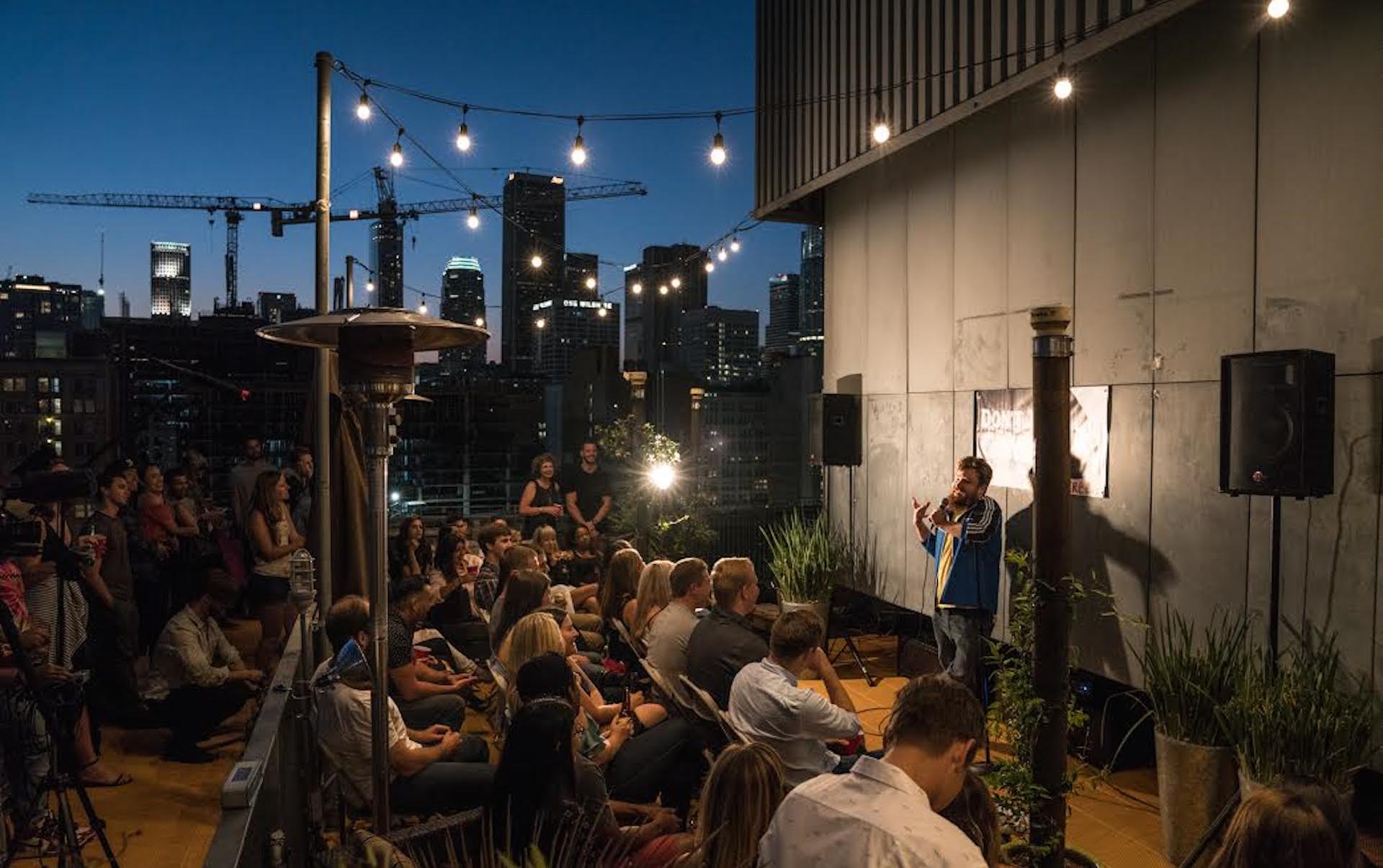 With its inaugural festival a rousing success, founder Kyle ‘KA’ Kazanjian-Amory is excited for the future

Having just wrapped its inaugural weekend-long festival, dubbed “The Boston Takeover,” it turns out that “Comedy’s worst kept secret” could very well be its next best thing.

Don’t Tell Comedy, a Los Angeles-based company that brings stand-up shows to obscure and random locations in more than 30 cities around the country, started in the most punk rock fashion possible, with a DIY backyard stand-up show. Since its inception in March 2017, comedian and founder Kyle Kazanjian-Amory (Or “KA”, as he presents it) has worked, alongside business partner Alex Weber, to turn an economically-sound response to the two-drink minimum of many comedy clubs into a rapidly spreading phenomenon — and it’s worked out pretty well so far, to say the least.

“I’d been to so many cool backyard shows in LA, which have always existed, but not in any real formal way, with comics just doing a show and inviting their friends,” KA tells Vanyaland. “I thought the concept would really work for stand-up, and so I just started looking around for spaces, and asking friends, and friends of friends if they had a backyard or a living room that we could host a show in. It was around the third show that I really started to think that it could work out, since more than just our friends started showing up.”

After getting the train rolling with free shows in LA that would sometimes have 200 RSVPs for a 60-seat space, KA began executing the outward expansion he had hoped for since the beginning, and brought the idea to San Francisco. Making his way to the Bay area, the Brookline native admits that DTC seemed to work even better in San Francisco than in Los Angeles, and the possibility of taking it to even more cities outside of California, and all around the country, was really based on one simple question.

“From [the shows in San Francisco], it was very much so playing a game of ‘where do I have friends I can stay with when bringing this to another city?’ and I thought the Northwest would be a good place to test it out,” says KA. “So, I drove from LA and San Francisco to Portland, and Seattle, crashing on couches while we tried to putting these things together in other cities, and it just kept working out.”

After busting it up out west, KA made his way to the east coast, returning home to the Boston area — and thanks to the comedy community that he is a part of, KA was able to find another successful spot for DTC.

Taking inspiration from San Francisco’s SketchFest, KA wanted to put on a festival of his own that would use the same sort of idea, but was better and easier to organize, and he came away with “The Boston Takeover,” DTC’s inaugural festival. With a great relationship already in place with a number of venues in Boston, KA’s search for housing these events wasn’t so tough – but that doesn’t mean it was a cake walk.

“All it took was finding eight different spaces to do these shows, and having done over 50 shows in Boston over the last year and a half, we already have relationships with venues that were interested in hosting,” says KA. “So, it really came down to figuring out the schedule, and booking comics for the lineup, and we had enough hands on deck to pull it off, but it was definitely a grind.”

KA admits that the festival was a worthy risk, but as selling out six of the eight shows that took place over the weekend can tell you anything, the success of the Takeover has KA hopeful for the future, in terms of unleashing it in other cities. While Boston’s comedy scene is consistently thriving and regarded as one of, if not the best in the country, and was a great starting point, KA wants to continue the festival in areas around big cities that don’t necessarily have comedy scenes with substantial girth.

With a pulse in 35 cities all over the country, it’s just the tip of the iceberg for Don’t Tell Comedy, and KA is looking forward to facing the challenges that are to come.

“At the end of the day, what we’re proving is that you can do comedy anywhere. You just need chairs, a PA, and a microphone, and you can transform any space, within reason, into a space for a comedy show, and that’s a fun challenge.”