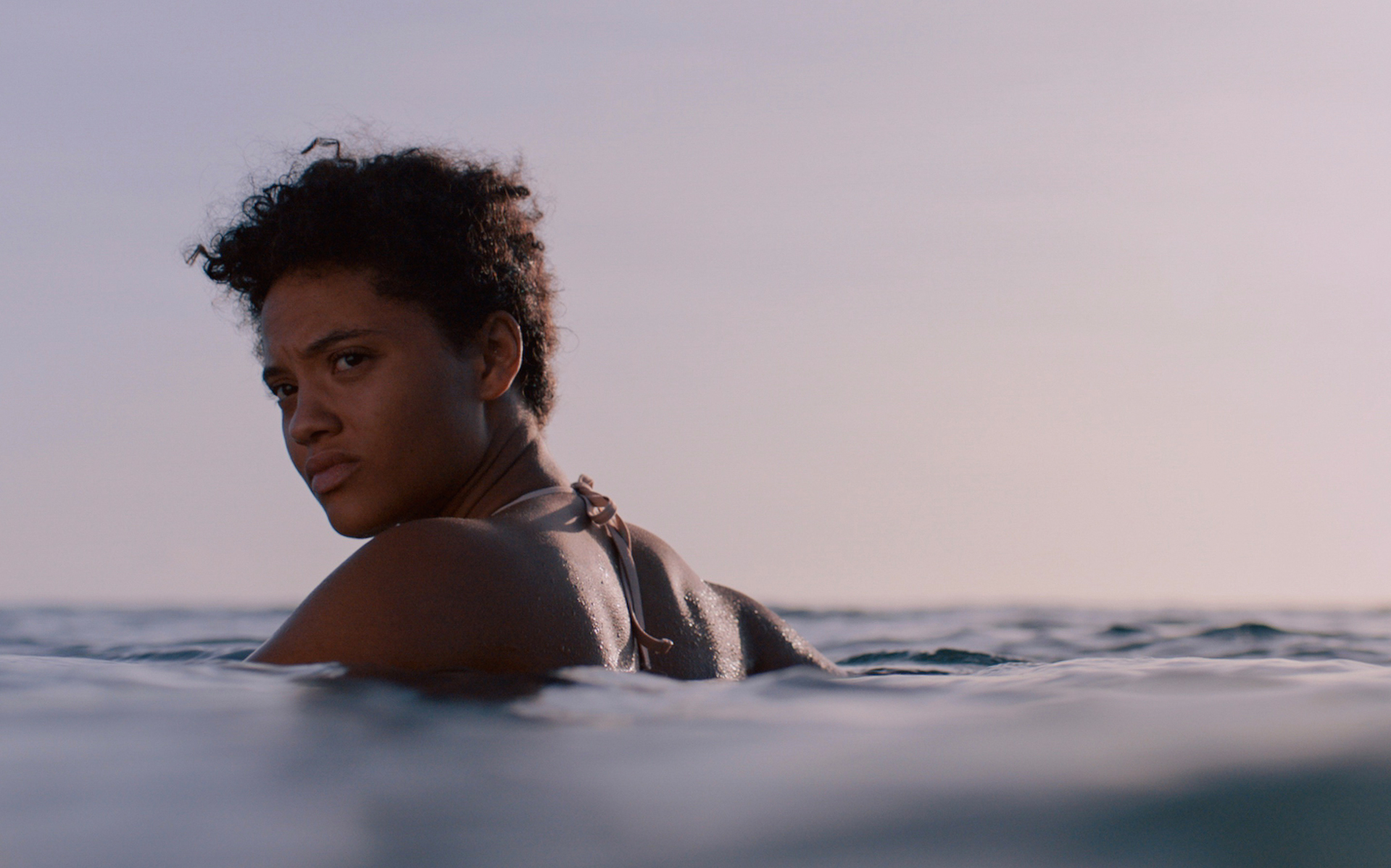 At the beginning of J.D Dillard’s survival horror Sweetheart, two bodies wash up on a deserted, empty beach. One belongs to a young woman named Jenn (Kiersey Clemons), who survived whatever malady at sea befell her, the other belongs to her dying friend, who, with his final breaths, warns her that he saw something in the water. Jenn shrugs it off, thinking it not too important in the grand scheme of things; after all, she has to find food and water somehow, and perhaps find some sort of way off of the goddamn island. But after a giant rainstorm occurs on her first night stranded, she finds something super odd washed up onto the beach: A shark, mutilated by some unknown creature. Odd, but not too out of place in the ocean, all things considered. She presses forward and begins to make herself a bit comfortable: She finds a safe place to sleep, fish to eat, and water from the bounty of coconuts on the island and from the rain the night before. Hell, Jenn even has time to bury her comrade in a makeshift grave. The next morning, she discovers the grave has been totally desecrated and the corpse devoured. Now shit’s beginning to get weird, and she makes some makeshift weapons for herself for her protection out of fallen branches. That night, she’s attacked by what can only be described as a giant fish monster, who comes out of the water each night from a black hole in the sea to pillage the island she finds herself stranded on, and she’ll have to fight to survive in more ways than just one.

That’s one hell of a premise, right? And for the first 45 minutes, Sweetheart unfolds exactly as one might hope it would: It’s a terse but incredibly suspenseful and creepy horror riff on something like All is Lost, where the mundanities of survival become even more fascinating given the supernatural elements unfolding around her. Clemons is an incredibly emotive actor, and she’s able to wring every last drop of pathos out of her situation, while also being an incredible viewer substitute. Much like Redford in the earlier film, we’re allowed to posit our own reactions on to her, and cheer her successes and fear for her life. And there’s plenty of fear to be had: Each encounter with the monster — who looks like the Fishman from The Shape of Water fucked a shark and then, once their child was grown, got 10 years in the monster prison for armed robbery and used all that time getting as swole as monsterly possible — becomes more violent and frightening.

Dillard, a talented director who released the magician/superhero film Slight to minor acclaim two years ago, smartly pulls from the Spielberg playbook, as we don’t see very much of the creature until shit starts getting real for Jenn. And when it does, you can see Dillard and his team’s commitment to practical effects work pays off. The monster has an imposing physical presence, and he doesn’t just look like a dude in a suit, even though that’s ostensibly what he is, he feels like an otherworldly entity.

But then the movie I Am Legends itself, where, thinking that the audience doesn’t have enough background on Jenn or that the monster needs more human victims in order to be scary, it introduces a few other characters who arrive on the island, including Brooklyn’s Emory Cohen. It absolutely wrecked the tension for me, which had been preserved with such monk-like focus and integrity that the addition of dialogue to this mixture felt like pouring spoiled milk into a perfectly good bowl of cereal. It doesn’t help that Cohen isn’t particularly good in the role, playing to the cheap seats in a way that contrasts greatly with the tone that Clemons has crafted here, and his dialogue is tinny and awkward in a way befitting something more like a Sci-Fi channel original. And, again, the only reason this is disappointing is that the first half — and what comes after all of this, which whips ass — is so fucking good and assured that it feels like an entirely different and lesser movie.

But, as mentioned above, the film does recover, plunging headlong into an incredible action/horror finale, which is tense and exciting in a way reminiscent of David Gordon Green’s Halloween last year. So, Sweetheart is definitely one of the standouts out of a crowded field of Sundance midnighters this year, and is well worth seeking out once it hits theaters. Just make sure you bring your Bat-Shark Repellent with you, just in case you get stranded on a desert island on your way to the theater.