Boston comes together for the Great Molasses Flood’s 100th anniversary

From music to comedy to beer, the North End's tragic Great Molasses Flood comes into a focus both humorous and respectful 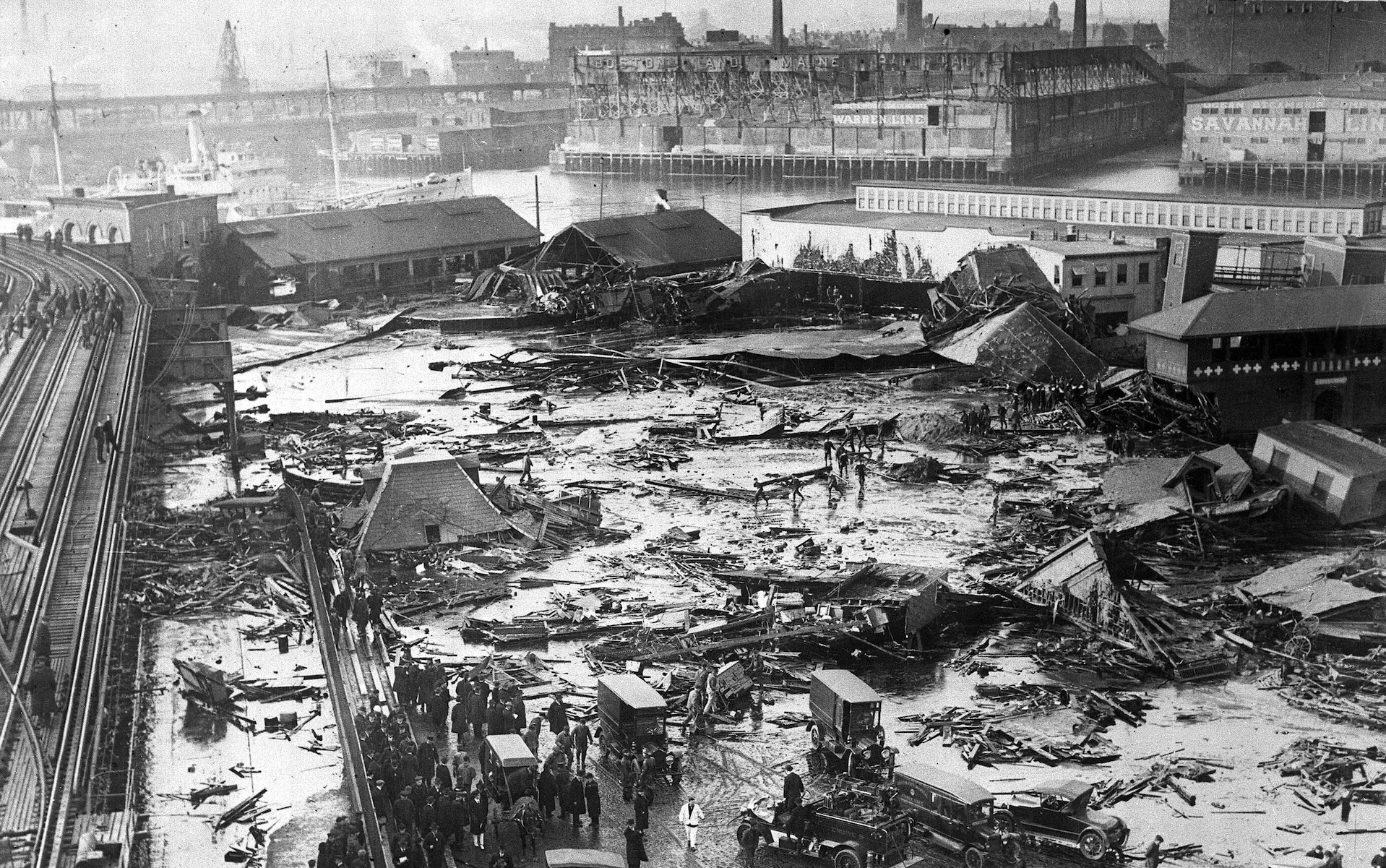 There are several memorable floods in American history: The Pennsylvania’s Johnstown Flood in 1889, the Great Mississippi River Flood in 1927, and Hurricane Katrina flooding New Orleans in 2005. While water caused the damage for those floods, an unlikely substance was responsible for deaths in a very different kind of flood here in Boston. On January 15, 1919, more than two million gallons of molasses burst out of a tank in the city’s North End, and sludged its way onto the streets of an Italian immigrant community. Twenty-one were killed, and 150 were injured.

In the century that has passed since the Great Molasses Flood (also known as the Molasses Disaster), the tragic and bizarre industrial incident with longstanding impact has become a historical staple, reaching a folklore-like status. In Boston especially, the Molasses Disaster has amassed cultural relevance — so much that its 100th anniversary on Tuesday has unleashed a wave of events — and a beer to commemorate it.

The sheer weirdness of the incident compels people to ask what it is, and once they know, the details are lodged in their brains. “It’s a Molasses Disaster… those are the two catchiest words you could put next to each other,” says Mike Rickshaw, whose band Mickey Rickshaw is hosting the Boston Molasses Disaster 100th Anniversary Remembrance Party Tuesday night at The Model in Allston. “I think people hear that [Molasses Disaster] and they go, ‘What?’”

That reaction can explain why the remembrance party, at the time of writing, has almost 5,000 people interested in or going to the event, according to Facebook. The remembrance party features an acoustic performance from Mickey Rickshaw, standup and the premiere of the cartoon SexCoward from Dicky Stock, poetry from Liz Stan Blake, and photography from Chorale Miles. Besides the featured artists, additional comedians and musicians will perform.

Rickshaw, who grew up knowing about the Molasses Disaster and has family members who lived in the North End generations ago, says the remembrance party started off as a small gathering to celebrate his friends’ art. It has now spiraled into the most talked about Molasses Disaster event of greater Boston. “Just ‘Boston Molasses Disaster 100th [Anniversary] Remembrance Party’. That in itself is something that [makes] people go, ‘What is this going to be? I’m gonna check this out,’” Rickshaw notes. “There’s a lot of curiosity.”

Nate Johnson, a sketch comedian who is hosting The Great Boston Molasses Comedy Disaster Show on Friday (January 18) at Great Scott’s weekly comedy showcase The Gas, also notes the odd nature of the devastating flood. “It’s unique because it sounds so ridiculous,” Johnson says. “People think of molasses and they think of this slow, goopy stuff. If you hear a flood a molasses, it sounds like you would have plenty of time to escape from that. But the circumstances of how it happened, you find out people didn’t have that opportunity. That’s kind of what makes it so tragic. It’s such a weird, unique event.”

The comedy show features sketch, standup, and video from Johnson, Ethan Marsh, Mark Gallagher, Nick Ortolani, Katie McCarthy, Jeopardy! champ Wes Hazard, Rob Crean, Shaun Connolly, and Sean Sullivan. According to Johnson, the show will feature material related to the Molasses Disaster and Boston history. Johnson, who hosted a similar comedy show about the Molasses Disaster eight years ago, said that the disaster’s uniqueness, paired with the historical value, makes it fitting for comedy shows. “I hope that they see that Boston’s history isn’t just the Old North Church and the Revolutionary War,” Johnson adds. “The cliches that Boston is famous for in terms of history and comedy are all kind of played out.”

Having killed 21 and injured 150, molasses suddenly looks less like the innocuous bottle at the grocery store and more like a goopy mass of treacherous brown liquid. The flood was more than an accident. “The reason for it occurring is because of corporate greed and ignoring basic safety guidelines,” Johnson tells us. “A lot weren’t even taken seriously 100 years ago. And then when they were trying to figure out reasons for it, they blamed it on the Italian immigrants. It’s blaming immigrants again for the problem. It’s kind of scary how it echoes current stuff that’s happening.”

Stephen Puleo, author of Dark Tide: The Great Boston Molasses Flood of 1919, says that the 50-foot tall tank that housed the molasses did not even require a building permit. It was considered a receptacle. “I think when people hear the story, they kind of hear how callous the company was in erecting this tank in a very congested neighborhood with very few safety precautions,” Puleo says. While Puleo was writing the book, one of the most surprising findings that struck him was “how quickly the tank was built, how poorly it was constructed, how shoddily it was inspected.”

The court case that followed the Molasses Disaster is considered a landmark case in U.S. history, Puleo notes. “It’s [the court case] really the first decision that goes against a large U.S. corporation. From that point on, the entire relationship between government and business changes. There are more regulations, more laws, more statutes, on employee safety, on public safety, those kinds of things,” he says. “I think a subset of that is that almost all of the building construction standards that we take for granted today, things like architects need to show their work, engineers need to sign and seal their plans, building inspectors need to come out and look at projects. All of those are direct results of the Molasses Flood and the court case that followed. I think those regulations would start here in Massachusetts and then ripple across the country so I think the longstanding ramifications of the flood are with us today.”

Andrew Cohen, a musician in the band Hot Molasses, also pays respect to the sufferings of the immigrant community. Cohen describes Hot Molasses as an “indie rootsy” band that settled into “indie rock.” “For me, calling our band Hot Molasses is a mix between the quirky piece of Boston local history, but mixed with the politics of we need to remember the people affected by the actions of big businesses, by the actions of people of power who end up using that power for their own advantage as opposed to thinking about the community,” Cohen says.

On February 2, Hot Molasses host the 100th Anniversary Boston Molasses Disaster Rock Benefit at Aeronaut in Somerville, raising funds for immigrant advocacy group Movimiento Cosecha. The show features Hot Molasses, Zepeng, and Alex Fam. Since 2008, Hot Molasses have hosted a fundraising show for a local organization that “promotes the rights of disenfranchised and oppressed people” close to the date of the Molasses Disaster. “I think what gets lost is what always gets erased — the history of people of color in this country, the history of powerful people being abusive to the communities in which they are located,” Cohen says.

“I think it’s important that we need to… have our neighbor’s backs,” says Rickshaw. “Anyone who comes to the country and works and wants to experience life here and start a life for themselves I think should be able to do that and not have to worry about the company that they’re working for cutting corners resulting in them getting killed or injured.”

Just like the sticky nature of the viscous liquid, the events to commemorate the Molasses Disaster serve to unite. Rickshaw said that by featuring a wide range of artists, he hopes the remembrance party helps people discover art they are not familiar with. “I hope it brings a lot more people into other people’s art that they weren’t already aware of because in music, you have a mixed bill show at least every once in awhile, and that brings fans of x type of music into this show where they watch this type of music,” he says. “This is a mixed medium show, if you think about it. I’m trying to bring different communities into one room.” 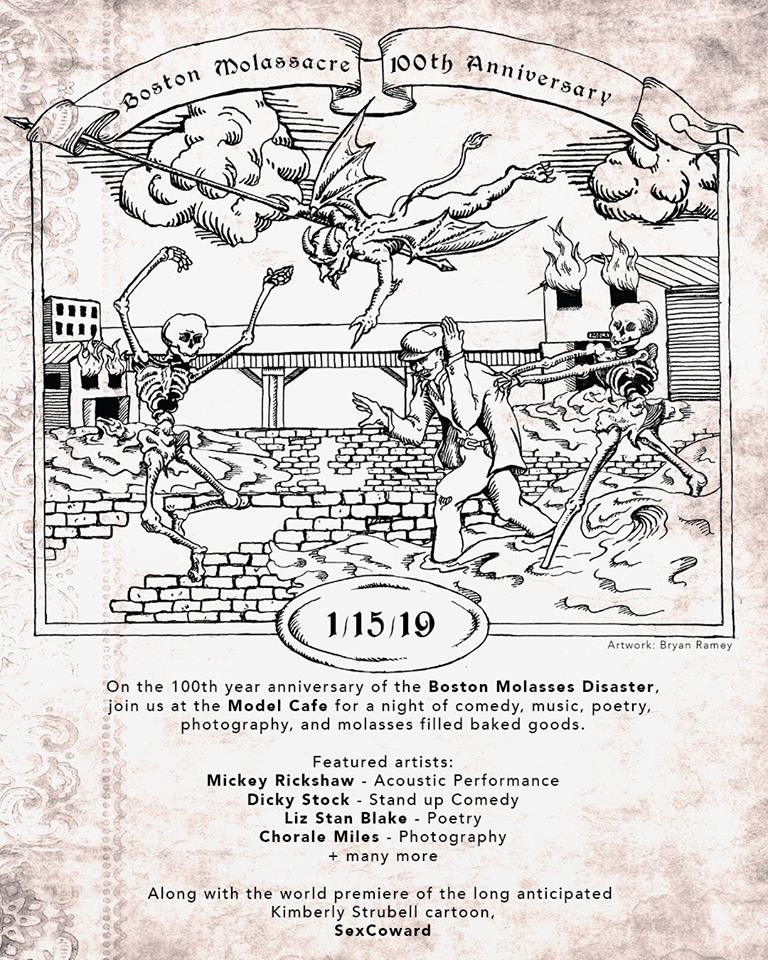