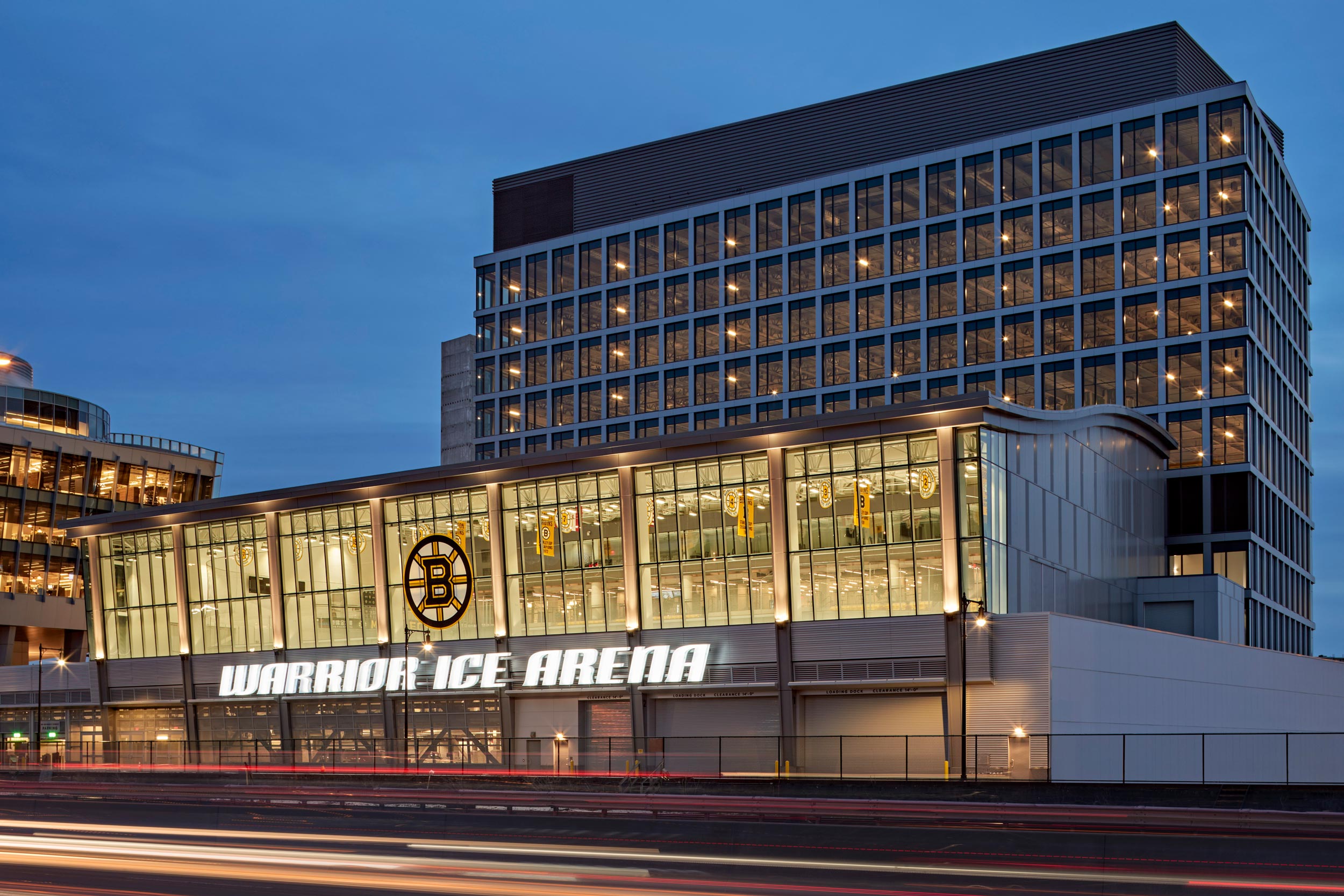 UPDATE November 14 at 11:50 a.m. EST: Rock City Skate Club has been cancelled “due to unforeseen circumstances,” according to the venue. We apologize for any inconvenience and stay tuned for word on our next event.
***
People sometimes say the Boston music scene can been pretty chilly.
Well, we’re about to make it ice cold.
Vanyaland is excited to power the inaugural Rock City Skate Club, an Isenberg Projects and Redefined party at Boston Landing that delivers three of the city’s finest bands and artists under one roof and over one cool sheet of ice. It goes down at the freshly-minted Warrior Ice Arena, the practice facility of the Boston Bruins, on Friday, November 16.
While attendees hit the ice and skate around the rink just off the edge of the Mass Pike — yes, this is a skating party — live sets from hip-hop crew STL GLD, alt-R&B dynamo Ed Balloon, and lightning-hot synthwave duo Trlogy fill the air with music. There will also be refreshments and all kinds of flashbacks to your childhood spent at the rink.
“Named as a reference to the neighborhoods nickname of Allston Rock City dating back to the area’s heyday of being the center of Boston’s rock music scene from the ’60s to ’80s, Rock City Skate Club will be the first time a concert has been brought to Warrior Ice Arena,” Isenberg Projects state. “Guests will enjoy an energetic night filled with concession stand style food, beer and wine, and a chance to test out your best skating moves while jamming out to a trio of Boston based artists brought to you by Vanyaland.
Tickets are $20, which includes a skate rental. But if you skate like Happy Gilmore and just want to hang out and catch the show, that’s cool too; tickets for basic admission are $15. If you have your own skates and want to hit the ice, tickets are $15. The party is 18-plus and gets started at 6:00 p.m.
Get all the info and purchase advance tickets here.
While the three performing bands and artists are no stranger to Vanyaland, get caught up on their latest via the mini-profiles below.
And we’ll see you on the ice come November 16.
Featured image courtesy of Boston Landing.

STL GLD is one of New England’s most exciting up and coming acts, Moe Pope and The Arcitype are STL GLD. The Emcee/Producer duo is heralded as one of the best live acts to come out of Boston and their sophomore album, ‘Torch Song’ was named ‘Album of the Year’ at the 2017 Boston Music Awards. STL GLD’s momentum has continued into 2018, sharing the stage with both Ja Rule and The Roots, as well as being added to the Boston Calling spring line up alongside Eminem. In July, after their headline show at Brighton Music Hall, STL GLD were crowned Boston’s Best Band by Improper Bostonian.

Ed Balloon is a singer and performer, whose music is a unique blend of R&B, electronic, pop, and hip-hop. With influences ranging from of Montreal, to Jill Scott, to Maxwell, his diverse musical background combined with his Nigerian roots, produces an unparalleled sound. Ed Balloon performs live with with a full band, to create an energetic stage presence, captivating his audience with one-of-a-kind dance moves.

Trlogy is a Boston synthwave duo composed of producer Lexx and vocalist Tanya. “The Boston synthwave duo continue to peel back the shadows without ever losing their mystique, and now after two sterling pop noir singles that stand out in the city’s uneven electronic music scene have unleashed their debut album, The Ritual. It’s a fitting title, as the songs swirl in synths to an almost hypnotic effect; the vocals of Tanya dance like a calm wildfire as Lexx’s production cascades through mountains and valleys of darkened synths colored in mechanical shades of neon. It’s an LP that shines like the nighttime and yearns like the moonlight.” – Vanyaland