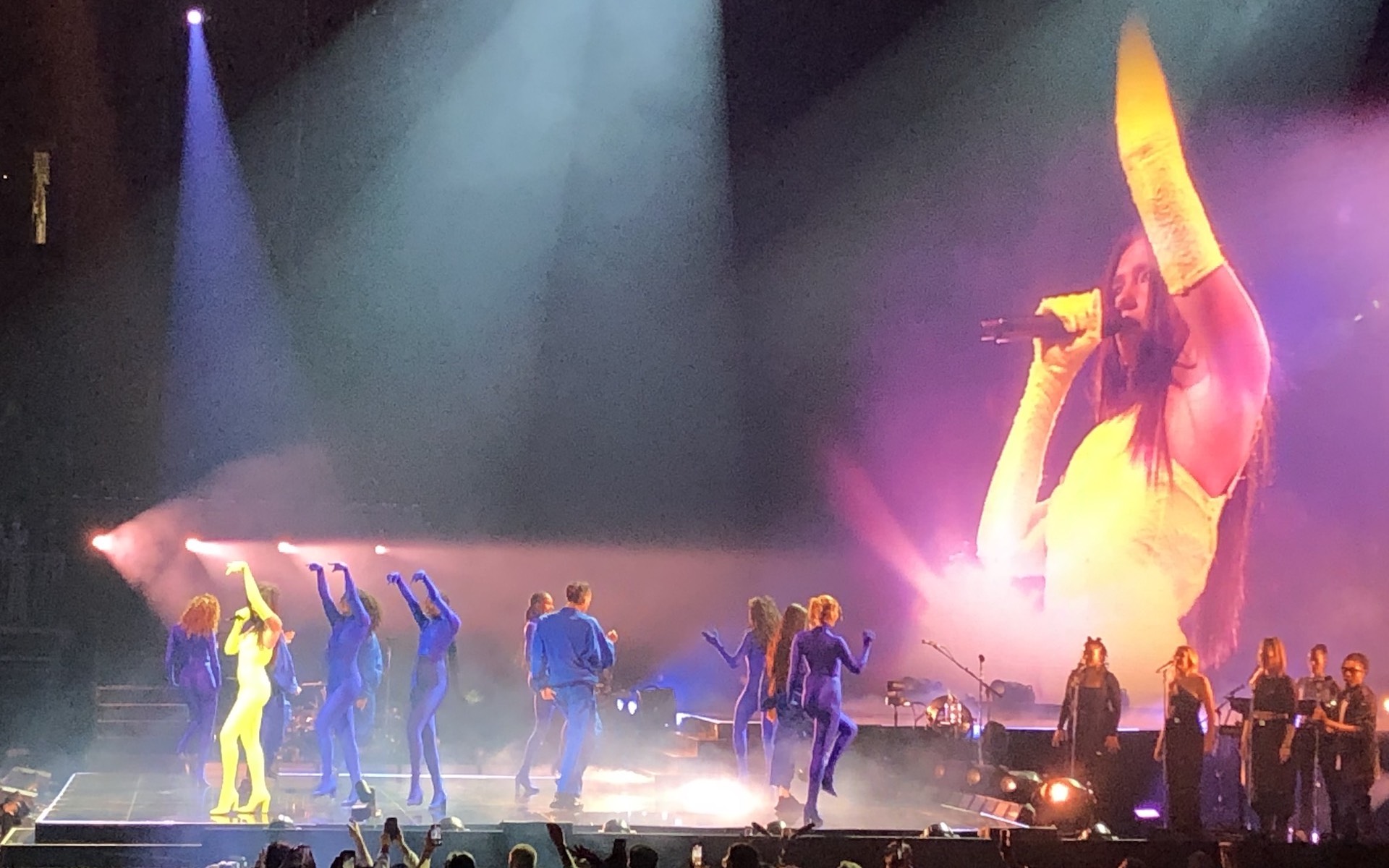 Anyone who doesn’t spend 20-plus hours a week on Twitter probably missed it.

The bitty crystals clinging to Dua Lipa’s catsuit glimmered under the lights at TD Garden last night (February 18) as she paused her pop to rock her hips with a smirk spread across her face. The seemingly innocuous moment might have been the most intentional 10 seconds of her entire 90-minute performance.

Before her immaculate 2020 album Future Nostalgia, and before her billion-stream smash hit “Don’t Start Now,” there was a viral video of Dua Lipa twisting her waist absentmindedly onstage in 2018. As the instrumental for “One Kiss” loops in the background, her face feels vacant, as she repeats this “dance move” mindlessly and without variation. Twitter was quick to raze the performance, eagerly flipping it from dance fail to meme fodder. The general consensus aimed for the jugular: This is your new queen of pop?

Every up-and-coming artist must eventually perfect the many facets of pop stardom, lest she plummet into the pit of one-hit wonders unable to regularly produce culture-shifting tracks and trends. Staying power comes down to a blend of clever choreography, a plucky persona, and eye-catching style — in addition to churning out “content,” be it her songs or social media posts. (Yes, we’re identifying this balancing act as something that explicitly hinders women. What, do you think men have to jump through this many hoops? Can Ed Sheeran dress or dance worth a damn?)

And while Dua Lipa represents pop music in its purest form in 2022, that wasn’t always the case. Just because her first hit “New Rules” ruled the airwaves in 2018 didn’t mean Dua would define jack in the years to come. Critics lauded her lyrics but nitpicked her performing abilities. Hell, Wendy Williams botched her name and called her Dula Peep on national television… repeatedly. The respect just wasn’t there.

Last night, Dua buried any old beefs regarding her dance moves merely by bobbing her hips two inches up and down. The revamped version — emphasis on “vamp” — of the viral video was all she had to do to prove how far her star had ascended since the release of her debut album.

But she generously gave Boston so much more.

She opened the evening with a fist-pumping rendition of “Physical” and kept the emphasis on her physical flawlessness from that moment forward. Dua’s initial costume, an electric yellow jumpsuit, literally highlighted her meticulous attention to motion. Her stage presence has done a full 180 (cray-zee) and see needs you to see it, damnit, even if the nuance of certain Internet humor doesn’t register for every person in the audience.

Cheeky clapbacks aside, Lipa’s 18-song-set last evening revolved around her refined capacity to shimmy, saunter, and snake across the catwalk — even straddle a mic stand if the mood struck her. Fans had two years to stream and spin the hell out of Future Nostalgia over the course of a pandemic. They already know what Dua’s funky sophomore fever sounds like. It was time to see what it looks like.

The visuals ranged from seductive poses besides an inflatable 10-foot lobster (“We’re Good”), glittering, UFO-inspired lighting fixtures (“Levitating”), and tricks with an umbrella like an old-school showgirl (“New Rules”). There were, of course, vocal highlights that sounded more impassioned in person — like hearing Dua cry out for “good pipe in the moonlight” during “Good in Bed” or her menacing chant of “Use-ta be afraid of love and what it might do” for “Love Again,” which sounded more like “You should be afraid of love.” The enamored crowd succumbed to her spell despite the warning.

As the title of Dua’s latest record implies, these songs are true “future nostalgia” — moments in 10 to 20 years when we’ll exchange crotchety laments like “God, remember when pop music was top-tier?” the same way that many people currently reflect on the Gaga-Rihanna-Katy-Ke$ha iTunes chart dominance of the early 2010s.

“You can’t get with this / If you ain’t built for this,” Dua retorted on the bridge of the title track during an encore that reached for dazzling disco heights. The Future Nostalgia tour proves Dua Lipa is, indeed, “built for this” staggering level of superstardom. And no one will dare call her Dula Peep ever again.