‘An American Pickle’ Review: Salty and sour, yet oddly sweet 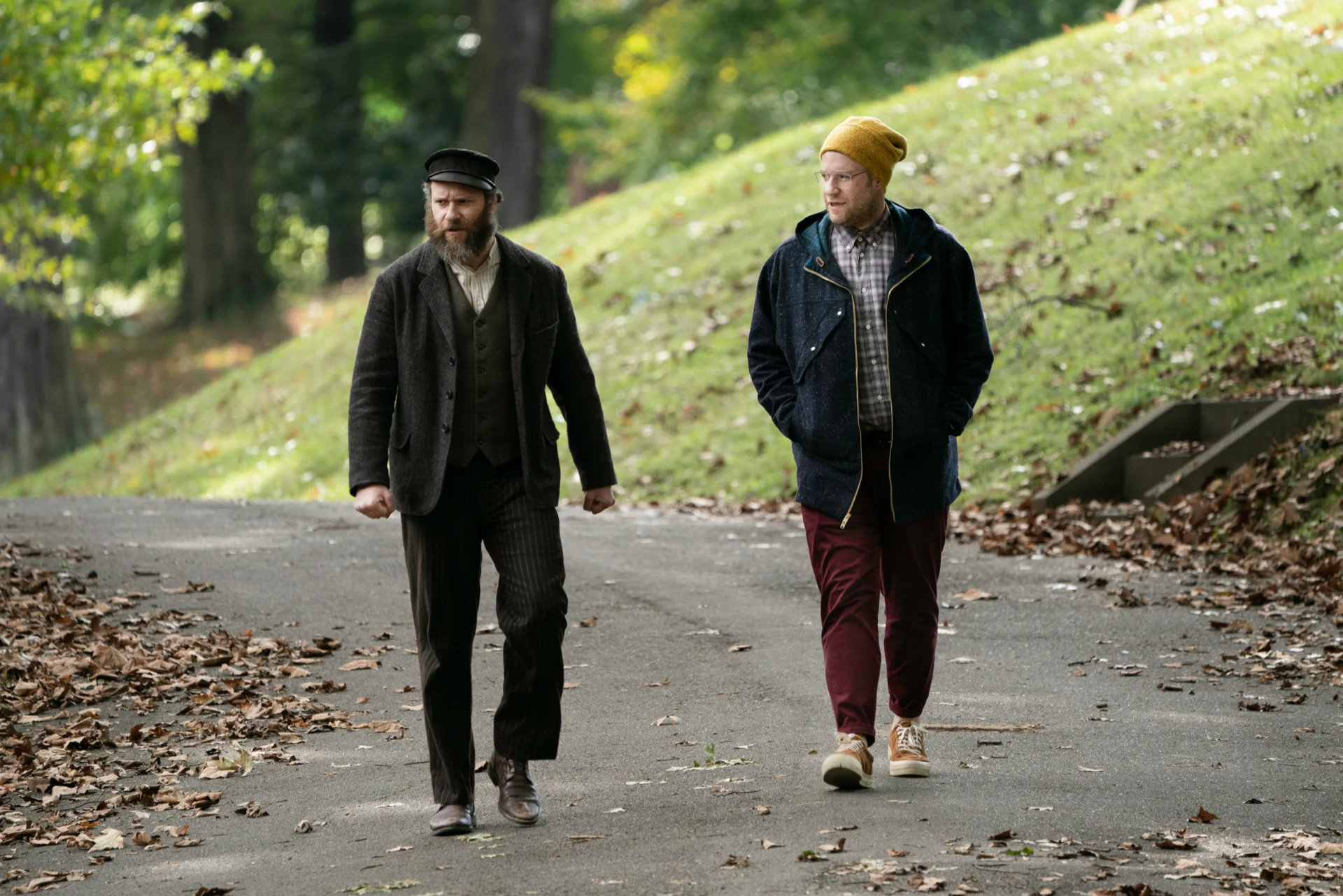 It’s been pointed out by more writers than are graduated by the NYU MFA program every year that we’ve shifted away from a star-centric Hollywood to an IP-driven one. Rather than Tom Cruise or Will Smith drawing you to the multiplex, we’re now propelled by, say, seeing our favorite superhero or a beloved book committed to celluloid. One unexpected side-effect of this is its deleterious effect on the High-Concept Comedy, which was once a major proponent of the system, and allowed for some risky-ass movies to be made thanks to star power and the subsequent studio financing. Now that risk is almost entirely pushed off to the indies, and generic farces dominate the landscape unless you’ve got enough clout to propel Pete Davidson’s life-story to the big screen. But every once in a while, we’ll get something reminiscent of films like The Incredible Shrinking Woman or The Man With Two Brains — personality-centric star vehicles with a ludicrous yet easily-summarizable premise — though it’ll often be found on a streamer. Such is the case with Brandon Trost’s An American Pickle, a Seth Rogen-led film that, somehow, doesn’t involve smoking weed.

Adapted by Simon Rich from his short story “Sell Out,” An American Pickle tells the story of Herschel Greenbaum (Rogen), an Ashkenazi ditch-digger who, along with his beloved wife Sarah (Sarah Snook), emigrates to the United States in 1920 following the destruction of their village at the hands of vodka-swilling cossacks. They settle in Brooklyn, and Herschel gets a job at a pickle factory, where he’s tasked with killing the rats on the factory floor. The couple have a meager and modest life in the U.S., but they make it by, and Herschel’s even able to secure a family plot at a graveyard. But, one day, Herschel’s cornered atop a catwalk in the factory by a group of rats and falls into a large vat of brine. The factory soon goes out of business, and Herschel’s forgotten about as the march of history continues.

In 2020, a pair of kids stumble up on the still-sealed vat in the ruins of the factory, and open it up. Herschel emerges, coated in salty brine, and is taken in by a group of scientists, who reveal him to the world. They tell him of the modern day, and let him know of his only surviving relative, his great-grandson Ben (Rogen also), an app developer who lives alone in Herschel’s old neighborhood. The pair seems to hit it off — Ben shows his ancestor the wonders of the modern world, including seltzer machines, kosher hot dogs, scooters, and smart assistants — but it all falls apart when the deeply religious Herschel, who is still very much a man of his era, discovers that his descendant has no regard for religion, and that the family plot has fallen into deep disarray. They have a falling out, and Herschel vows to start a pickle business that will be the envy of the world, and Ben, whose hopes and dreams have been dashed thanks to the arrival of his great-grandfather, rightfully writes him off. But when Herschel starts having some success re-purposing trashed cucumbers and salt as artisanal pickles, Ben tries to sabotage him by using his knowledge of the modern world against him.

A whole lot of An American Pickle depends on two things: First, you have to be able to accept the kind of broadly witty high-concept on display here at face value, and second, you have to enjoy watching Rogen do what he does. And, honestly, I was willing to swallow both hook, line, and sinker thanks to a few different factors. First, you can tell that a cinematographer directed this film: Trost, part of the filmmaking duo who brought us The FP and a prolific DP who has worked with both Marielle Heller and the Apatow-adjacent on projects like The Disaster Artist, Popstar and The Interview, has achieved an interesting look alongside cinematographer John Guleserian, who lensed this project. It has an interesting muted palette that applies to both The Old Country (in time and in place) as well as modern-day Brooklyn, and Guleserian’s compositions are much more interesting than you might expect from a modern studio comedy, given that, well, they’re compositions, not just clumsily-filmed sketches. Is it particularly good, in comparison to anything outside of the comedy genre? No, not really, but at least it’s trying. The bar here is so low, unfortunately, that even the vaguest attempts at artistry can make one look like Roger Deakins.

I can’t speak from firsthand experience to the accuracy of Rich’s insight into the specific cultural psychology of his characters, but they feel real enough, even if they’re slightly exaggerated by the very nature of the genre. But Rogen’s smart enough as a performer not to make either them into caricatures, which would not have been a given under any circumstances. Both Herschel and Ben play to Rogen’s different strengths as a leading man — the brash, loud and vivacious Herschel captures his charisma, while the more-reserved, depressed Ben taps into the angsty loneliness that often undercuts the Rogen protagonists’ humor in his more dramatic work — and it’s to Trost and Rich’s credit that they often pit these aspects against one another, often in unflattering and humorous ways. Rich doesn’t shy away from pointing out that your long-dead ancestors probably would have held some hideous opinions if they were brought to the modern-day (though it’s never used as a license to be as politically incorrect as one might assume here), but Ben’s progressive attitudes don’t shield him or absolve him from, well, torturing his great-grandad.

It would have been so easy for An American Pickle to fall in any of these traps, which would have both made it into the kind of “Seth Rogen stars in Fiddler” jokes that floated around Twitter early on in the film’s promotional cycle and completely insufferable, but, thankfully, Trost, Rich, and Rogen are better than that. They know that the concept is thin, so they keep the film short, and it barely lasts over 85 minutes. They know that you’re liable to not find the film particularly “funny” in the way that you’re expecting (though it still has a number of solid laughs), so they spend time building and establishing their protagonists instead. But it is something unique and interesting in our landscape, and I’m excited to see what Jewish critics have to say about it in the coming days. It’s not anywhere close to a perfect film, or even a “great” one, but An American Pickle is a pretty good way to spend an afternoon reminding yourself what it looked like when star-driven comedy vehicles existed in the multiplex.