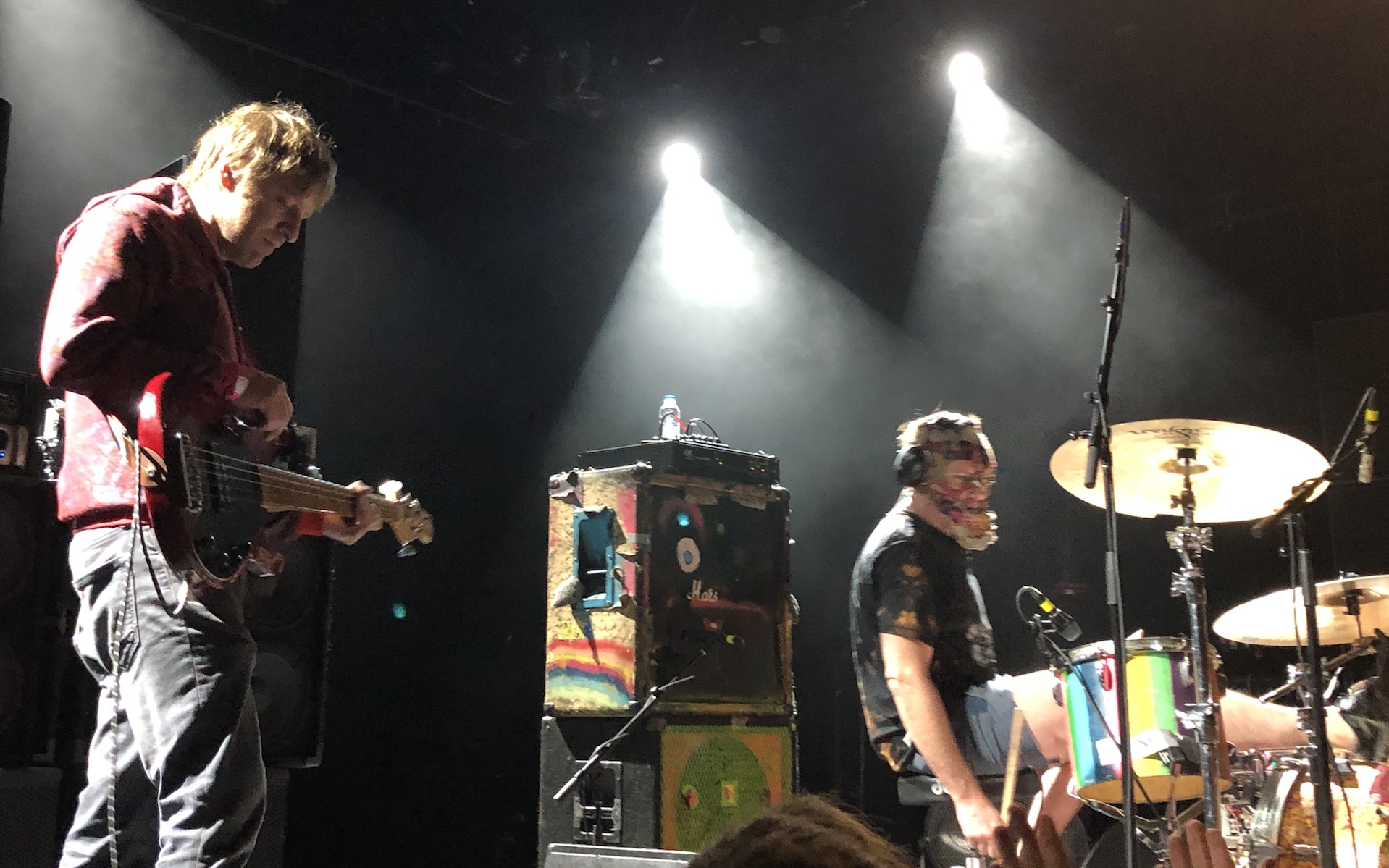 I love a good two-person rock band. It’s not easy for a duo to make as much noise as a four or five-piece group, but the best have come up with some pretty clever solutions. Scott Lucas of Local H had a bass pickup added to his guitar, while Randy Randall of No Age and Brian King of Japandroids simultaneously run their guitars through both guitar and bass amplifiers. Providence noiseniks Lightning Bolt belong to this lineage of sonic innovation; drummer/vocalist Brian Chippendale plays with a contact mic strapped to his mouth, and Brian Gibson’s added a couple banjo strings to his bass. Their main strategy for overcoming their limitations, though, is simply playing louder and with more pulverizing intensity than just about any band around. Wednesday night (December 4) at The Sinclair in Cambridge was no exception.

The night’s opening acts shared the headliner’s underground sensibilities. Brookline Community Teen Band were, as advertised, a band of local teenagers, though their rumbling, dissonant noise-rock and ominous spoken-word monologues were a far sight cooler than anything I played in my terrible high school bands.

Next came Warwick, R.I.’s Baby; Baby; their full name is Baby; Baby: Explores the Reasons Why that Gum is Still on the Sidewalk, and that should give you a sense of the elevated plane of strangeness on which these folks operate. Songs consisted of chintzy but catchy electronic riffs and eerily atonal guitar plucks, over which vocalist Lips B-Day screamed and taunted, her voice looped, echoed, and generally manipulated into incoherence. The whole thing felt like a performance art goof with the sole purpose of amusing the band and their weirdo friends (one of whom stood to my left, wearing a Batman mask), but B-Day still won the crowd over with her enthusiasm, which manifested in some truly over-the-top dance moves and loopy declarations like “This is our first time in Boston… we’re going to change our name to Boston Boston!”

As Chippendale strapped on the hideous mask which would hold his mic in place, he told the audience about the climbing chalk he was going to rub on his hands tonight to see if it improved his grip on his drumsticks. Even with the distorted contact mic lending his speech a somewhat Bane-like tone, it was a disarmingly casual way to start the show, as if Lightning Bolt were just about to play a sparsely attended basement gig and not a packed rock club. Then he and Gibson kicked into “The Metal East,” and suddenly the front half of the venue was one gigantic mosh pit. Lightning Bolt didn’t play long — nine songs in about an hour — but that pit raged for almost the entire set, the crowd feeding off the musicians’ borderline inhuman stamina.

Lightning Bolt are a formula band. Spend enough time listening to them and you’ll pick up on how each album tweaks that formula, but the base ingredients remain the same. A Lightning Bolt song is powered by Chippendale’s hard-charging, frantic drumming; sometimes he settles into a relatively simple hardcore beat, but other times he’ll just go off on these insane fills for minutes on end, all while somehow still keeping time. Meanwhile, Gibson is pounding out riffs on the bass, which is often overloaded with effects until it sounds just like a guitar. String a bunch of these songs together, and you’ve got yourself a Lightning Bolt concert: Just a series of adrenaline bombs, the next one going off just as you’re catching your breath from the last one.

There’s slightly more to it than that, of course. The pair knew when to ease off the gas and build a little suspense, typically in the form of a Gibson bass solo. Chippendale’s in-your-face drumming style makes his virtuosity obvious on every song, but these solos showcased Gibson’s equally impressive talent, as he tapped and shredded like a heavy-metal guitar god. Also underrated is the value Chippendale’s vocals bring to the equation; they add this little dash of melody and absurdity which drives home how, for all their ear-shredding brutality, this band doesn’t take themselves too seriously.

Before Lightning Bolt’s last song, Chippendale threw a fistful of climbing chalk (which he said had just made his sweaty hands all goopy) into the air, and it fell to the ground like a gentle snowfall. Then they played “Mega Ghost,” multiple crowd surfers went up, and the pit thrashed itself silly once more. It was a real fun time.