Live Review: Iron Maiden honor the ‘Legacy of the Beast’ at Xfinity Center 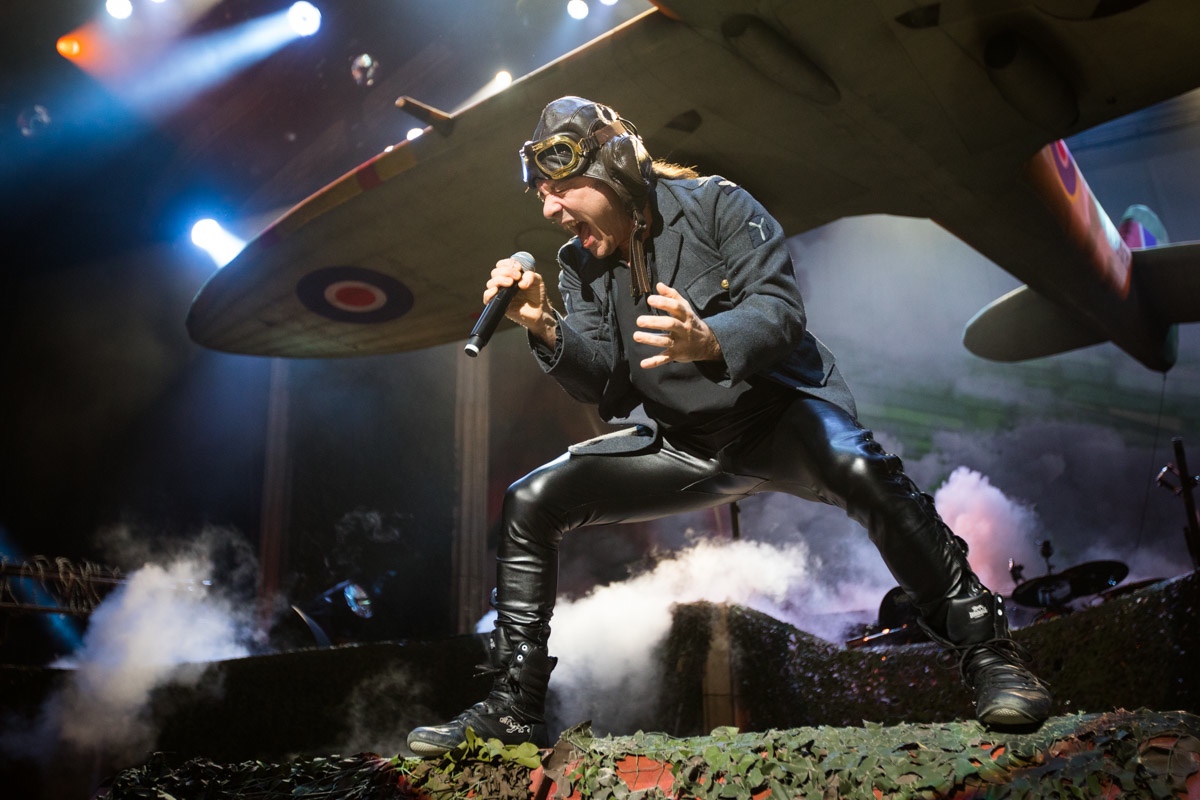 “You know you’re old when Rolling Stone gives you a good review,” Iron Maiden singer Bruce Dickinson joked a few songs into his band’s two-hour Xfinity Center show Thursday night (August 1) in Mansfield. The pioneering heavy metal band does seem to have aged into a certain respectability; their current tour, a no-new-songs greatest-hits jaunt (though Dickinson promised from the stage that new Maiden music is forthcoming), bears a title that sounds like a hagiographic Rock and Roll Hall of Fame exhibit: “Legacy of the Beast.” As the members of Maiden become old, richer-than-God British eccentrics, with all of the expensive hobbies and questionable politics that entails, their years of baiting Satanist controversy and confounding the critical establishment fade ever-further into the rearview. None of this detracts in the slightest, however, from the Iron Maiden live experience, which remains an arena-rock spectacle of the highest order.

Most bands would wait until the encore to unveil a set piece as awesomely ridiculous as a humongous replica of a World War II fighter plane, complete with the singer’s donning of a period-appropriate leather flying helmet. This is how Iron Maiden began their concert Thursday night, because even if it is possible to play a song about aerial combat called “Aces High” without a giant plane, the band simply cares about their fans too much to risk it. From there, the prop-work only continued to escalate, with almost every song meriting at least a new backdrop and a new Dickinson costume. Dickinson’s swordfight with band mascot Eddie (who must have stood about nine feet tall) during “The Trooper,” fireworks exploding on the stage ceiling at the climax of “Sign of the Cross,” and Dickinson strapping on a backpack which allowed him to shoot flame from two nozzles for “Flight of Icarus” were just three of many awe-inspiring moments in a stage show which made lasers seem downright pedestrian.

Such an overwhelming sensory feast could have easily distracted from a lackluster musical performance, but Iron Maiden would not allow themselves to be upstaged so easily. Watching a band this technically accomplished feels a little like watching Olympic athletes; in both cases, you get the thrill of watching incredibly skilled humans execute difficult tasks with flawless precision. Anyone even passingly familiar with Iron Maiden is aware of the sonic elements which made them so influential — the triple-guitar attack, the “galloping” rhythm, Dickinson’s commanding wail — but seeing those elements cohere in real time on headbanging anthems like “2 Minutes to Midnight” and “The Number of the Beast” gave them a fresh, visceral impact. Each member performed their rock-star role with admirably non-ironic commitment and stamina, Dickinson exhorting “scream for me, Boston!” and the guitarists putting their legs up on the monitors or twirling their instruments over their heads.

Though the sea of metalheads in Iron Maiden shirts throwing up devil horns and shouting along with every chorus would probably disagree, the show was not without its weaker moments. Many of the longer, proggy songs in the set’s midsection dragged a bit, lacking the momentum which made their faster, more purposeful compositions so exciting. And the band’s obsession with war (though not entirely uncritical) soon grew tiresome; walking out to Winston Churchill’s “We shall fight on the beaches” speech is one thing, but shouting out Mel Gibson before the Braveheart-inspired “The Clansman” is another entirely.

The main takeaway from Thursday night, however, was that Iron Maiden have worked harder and longer than just about anyone to give their fans an experience worth writing home about. After closing with the all-time great metal epics “Hallowed Be Thy Name” and “Run to the Hills,” the show ended with Dickinson setting off flame jets by pushing down a comically oversized detonator labelled “TNT.” If that’s not entertainment, then I don’t know what is.