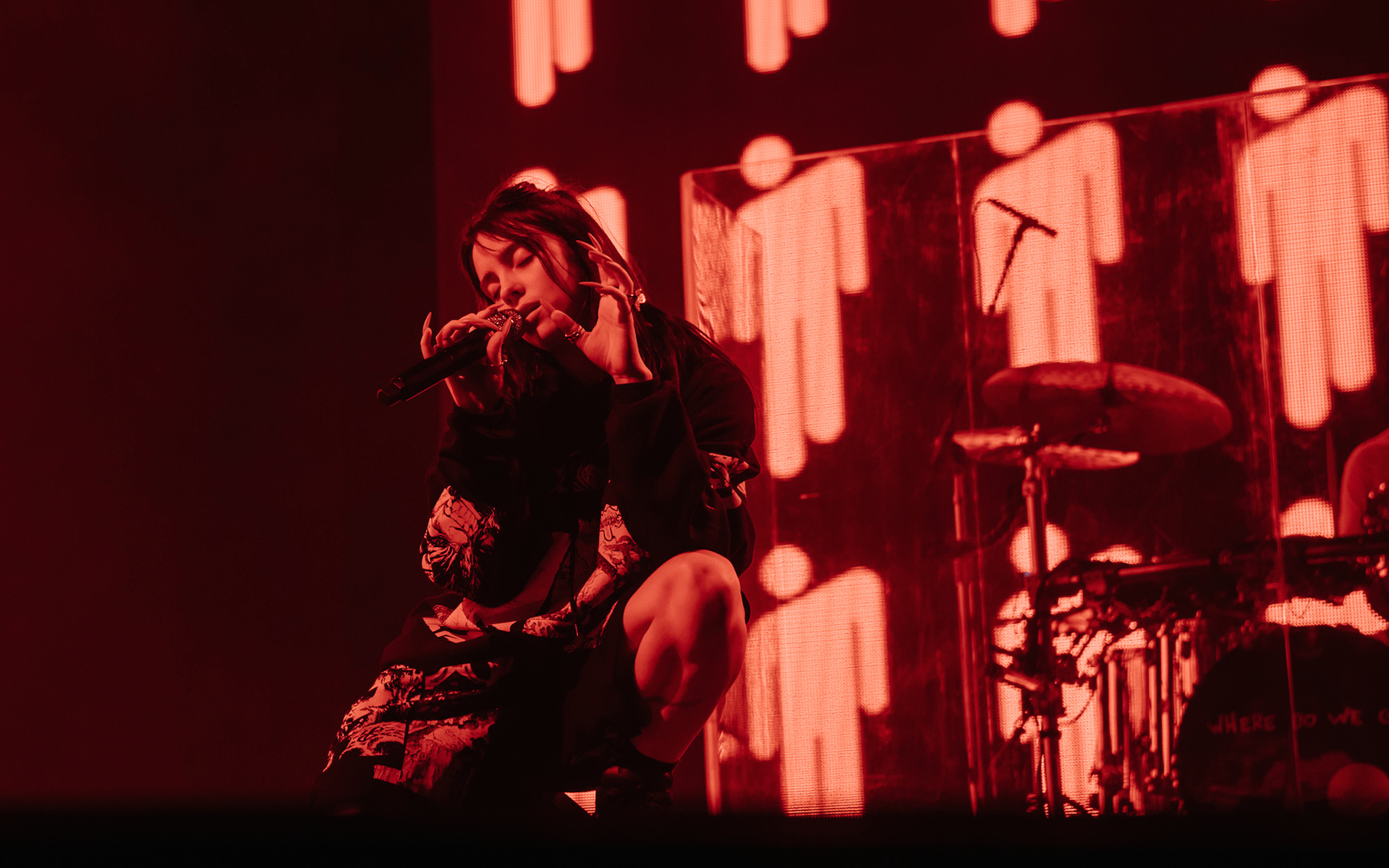 If teardrops could be bottled, the Charles would be filled two times over by all the teens — and grown-ass adults — who couldn’t nab tickets to Billie Eilish’s show with Denzel Curry Friday night (June 14) at the Rockland Trust Bank Pavilion.

Forever clad with oversized sweatsuits, Eilish is the 17-year-old fulfilling an ancient pop prophecy (probably) on an alarmingly exponential ascent to icon status, all centered around one single, bratty syllable: “dUH.” She’s the girl with the tarantula in her mouth who sobs thick black tears in the name of aesthetic — the girl with images of her likeness roasting in hell for a stage backdrop, our maudlin first lady of strange addictions.

Put simply: We should all be afraid of Billie Eilish.

But somehow, despite her distinct brand of danse macabre stardom, the masses stood agog Friday night, equal parts rapt and enticed, and completely unbothered by her house of horrors. It’s a pretty fucking neat party trick on Eilish’s part.

Almost as neat as balancing on a prop bed that’s been hoisted 50 feet in the air and tilted forward so that anyone who’s not in league with the devil would slip off and snap an assortment of vertebrae. The scratchy words “Why aren’t you scared of me?” escaped her lips as she did her own “Smooth Criminal” illusion via “bury a friend.” All this from the same young woman who wrote a song about vengeance at 15 and thinks doing time is comical.

Skittering across her stage-atop-a-stage at the Pavilion while performing “bellyache,” she’s the embodiment of Gen Z’s array of new millennium mindsets and actives, like reciting menacing threats in the form of Sherlock references (“you should see me in a crown”) and wishing your crush’s reason for disinterest stemmed from their sexuality (“wish you were gay”). Billie Eilish — she’s just like you! Because pop tends to be a drag now, and teenagers want a fellow adolescent they can commiserate with in new, interesting ways. The entire situation makes a Billie Eilish concert, without a doubt, one of the strangest forms of musical bonding humanly possible.

The cultural sway that ensues is perhaps even more astounding.

“What is it about them? I must be missing…. something,” she pondered on “xanny,” her anti-self-medication statement that has not only made it fashionable to abstain from drugs, but made the public denouncement itself ~cool~. (D.A.R.E. had the wrong approach this whole time!)

These are the dynamic moments when her spell seeped the furthest into her fans’ subconscious, the minutes when she wielded that so-strong-it’s-mythical magnetism over the 5,000 people huddled under a tent, all eyes on the young lady in the floppy black sweatshirt. She insists she’s “just” drinking Coke from the can, observing others from afar, lost in thought and puffs of secondhand smoke in their periphery. In reality, when the shock-pop is stripped away, Eilish operates at her most powerful.

Plopping herself on the stage, legs sprawled, her musical current grew stronger with “listen before i go.” And “idontwannabeyouanymore.” And “ocean eyes.” Sure, all the good girls go to hell, but is Eilish still doomed to that fate when she’s snuggling her brother/guitarist/producer Finneas on the aforementioned prop bed, levitating and naturally high on dopamine when sweetly performing “i love you” ?

This is our 17-year-old wunderkind in her most mighty stance, where she stakes out her songwriting merits without the distraction of some grisly animations convulsing behind her. Eilish leans into the macabre but doesn’t lean on it like some gimmicky crutch: If there were never a “bad guy,” nor “bury a friend,” she would still be right there onstage with her brother, spelling out her latest lullaby.

And when the party’s over, that lone testament to her abilities is the most frightening — and impressive — facet of them all.