From coldwave to tunes from the show's original soundtrack, the Somerville venue hosts an all-femme show as a tribute to the cult classic

After getting treated to some renovations last fall, ONCE Lounge is getting a second, temporary new look tonight (February 1), as the independent Somerville venue prepares for The Red Room, a Twin Peaks-themed night of live music.

Inspired by Twin Peaks: The Return, the late-arrival third season of the 1990s cult classic TV show, ONCE gets transported to the northwest for the room’s first ever Twin Peaks evening of tunes from Boston women.

“ONCE Lounge has a similar atmosphere to The Roadhouse (Twin Peaks‘ bar/venue with the BANG BANG BAR red neon sign),” shares participating musician Emily Arkin in discussion with organizer Bridget Duggan. “In this new season of Twin Peaks, they featured really cool live music each week. She [Bridget] immediately thought it would be fun to portray the world of Twin Peaks as a theme at ONCE Lounge.”

On the all-grrrl roster to perform tonight are DJ Heather D, spinning post-punk and goth-y coldwave, singer/songwriter Paige Chaplin, and The Mystery, who remain a literal, er, mystery. Live music from the original Twin Peaks soundtrack by Angelo Badalamenti will be provided by the new Boston supergroup Julee Cruise Director, featuring members of The Shaggs, Major Stars, Shepherdess, and Umbrella Pine.

ONCE bar manager Joel Barberi, who coincidentally used to host a Twin Peaks themed cocktail night at the West Side Lounge, will offer special treats for the evening, including pie, decaf coffee, donuts, and two new cocktails: The coffee liqueur drink “Damn Fine,” and the pine liqueur treat “Douglas Fir.”

Says the ONCE description of the event: “The moonless night of Friday February 1, will reveal the ONCE Somerville lounge as a gateway into another, more dream-like world: The Red Room of Twin Peaks. The lounge hosts a night inspired by the ’90s/2017 cult series, with a riveting, all-femme bill of bands providing a sonic soundscape to transport you directly to whichever lodge you wish to visit. Twin Peaks decor and refreshments will be hand, and the audience is encouraged to come in attire inspired by the show’s singular characters.”

Think of it as a newfangled Halloween-in-February celebration. 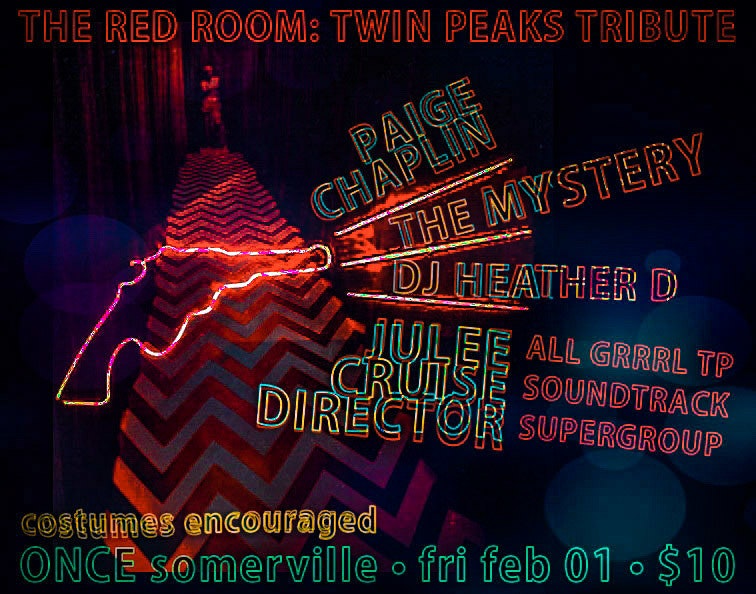