Listening to that new GVSB we just posted reminded me of the new self-titled record from Boston trio Z*L, released yesterday via Midriff Records. They were supposed to have their release party this past Friday at Radio, but we all know what went down that day, so like everything else around town it was postponed.While we await the re-sked date of May 10, also at Radio and featuring Thalia Zedek, You People, and Do Not Forsake Me Oh My Darling, the album’s release trudged forward this week (available at the Midriff online store, and iTunes). And we’ve been buzzing to the low-highway speed groove of “Steev Millar,” a guitar-gasmic hummer of a scab-picking tune that’s already one of our faves of the year.

Formerly called Lucky Dragon, Z*L are Jack Knife on drums, Isabel Riley on bass/vocals, and the great, if not criminally underrated, Ian Adams on guitar/vocals. Adams’ incredible 2009 solo record was a soulful departure from his heavier work in Rock City Crimewave and 8-Ball Shifter, and while it successfully helped me get over a breakup (like the Daily Pravda’s “Dead House,” I would play Adams’ “A Man Possessed” and the title track as the ex-lady packed up her shit and left our apartment) it’s good to see Adams rocking the fuck out again.

And here, he’s at his slow-cigarette-drag finest. The pace of this song is quite alluring. 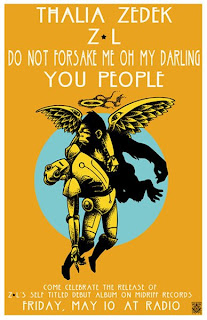