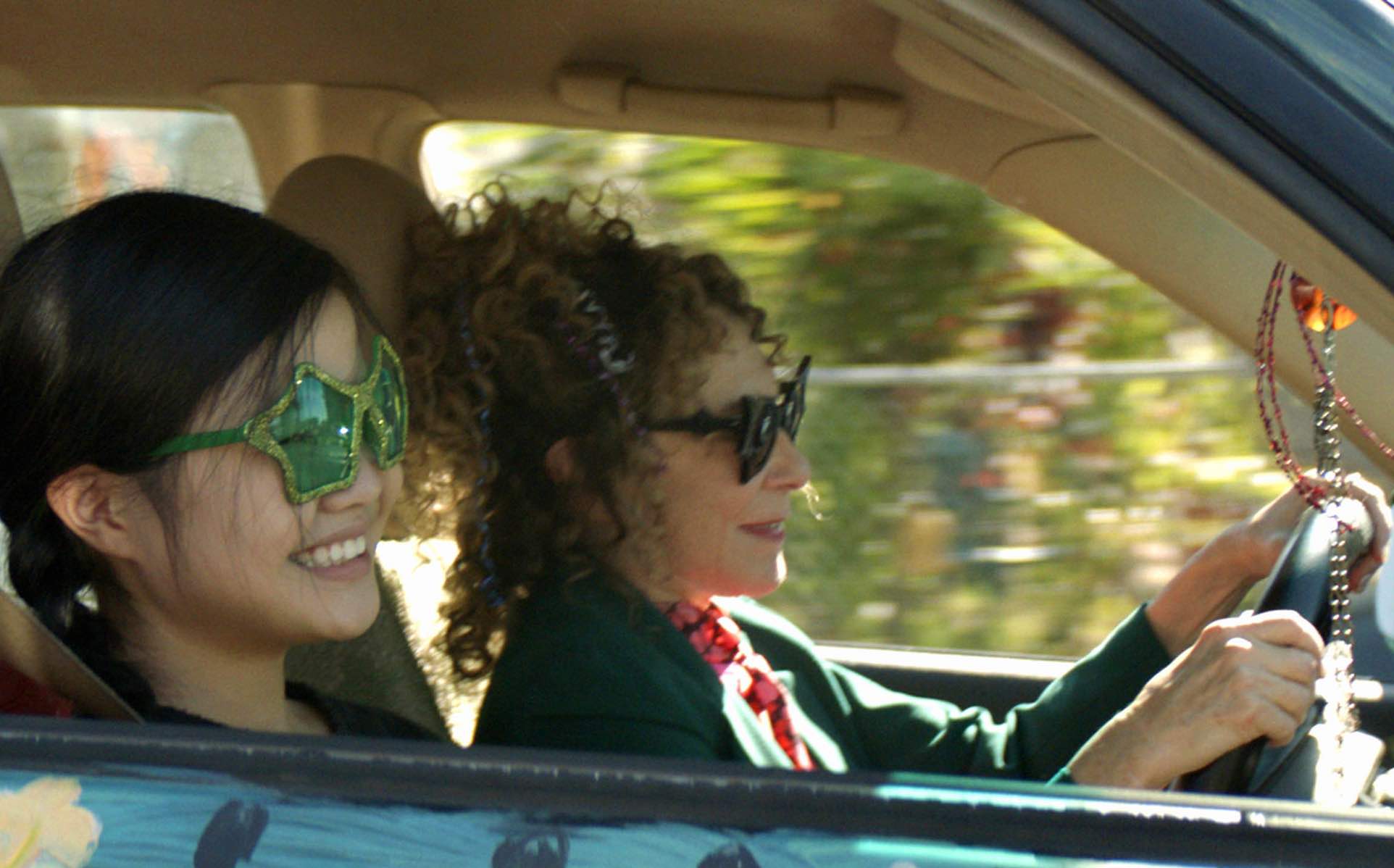 Kate Tsang’s feature debut Marvelous and the Black Hole shares a lot in common with something like Hal Ashby’s Harold and Maude. Both are reasonably twee tales of intergenerational relationships (though, in Tsang’s case, it’s a strictly platonic mentorship), both concern the plight of deeply upset young people, and both take place in cinematic worlds with a measure of the fantastic thrown in for good measure amongst the slings and arrows of “modern” life. But the difference here — beyond the key one pointed out above — is their rhythms. Tsang, who has spent much of her young career as a writer working on cartoons like Steven Universe and Adventure Time, has taken the dramedy stylings of those animated worlds and, with the help of her two fantastic lead performers, adapted it smartly to a live-action format.

Sammy (Miya Cech) is a hell-raising teenager who spends much of the first bit of the film sporting a massive black eye thanks to her work on a destructive prank in a school bathroom. Her father (Leonardo Nam) doesn’t get what’s going on with her, and her nerdy older sister (Kannon) can’t really relate to her, even when she’s able to look up from the online Minecraft-like game she spends her day playing. But, truth is, Sammy is struggling: Her mom recently passed away, and, six months later, her dad has not only found a new partner (Paulina Lule) but maybe planning to pop the question in the near future. So, to potentially inspire his daughter to do great things with her rage and passion, he enrolls her in a business class at the local community college, which she promptly ditches. But she’s discovered by an older woman, Margot (Rhea Perlman), who, instead of taking her to the college’s offices and turning her in, takes her to the little preschool attached to it. There, Sammy watches Margot do a lovely little magic routine, full of heart and power, and becomes somewhat inspired by it. Tasked with doing an assignment on a profession she’s interested in (and after she gets caught copying the Wikipedia entry), Sammy tracks Margot down and begins learning from the older woman, a new summer routine that she keeps in the dark from her disapproving dad.

Perhaps the most striking thing about Marvelous and the Black Hole is its aesthetic, which feels fully rendered in even the smallest spaces. For instance, Tsang has an animator’s relationship with faces: Each of her extras or bit players stands out in a given scene, in defiance to the kind of anonymity with which any number of other productions might regard them. That expressiveness is present in other aspects of the film as well, but it’s more obvious in the outright moments of fantasy. As such, Marvelous and the Black Hole features a number of cut-away gags and retro-stylized dream sequences, and, though some may find these things unbearably twee per the Sundance fashion (Troop Zero, anyone?), Tsang’s agreeable sense of style and understanding of both juvenile humor and angst helps to defy expectations. There’s a particularly lovely fantasy in which Sammy dreams as she listens to a cassette her mother recorded for her prior to her death about a moon-bound princess and her bunny companion watching the earth, styled like the old movies she watches in black-and-white on an old television, and a gory bit of humor involving what would happen if Sammy actually sawed a box containing her step-mother in half.

But, I think, what separates Marvelous and the Black Hole from so much cutesy stuff in this genre are the characters that Tsang has created, and her direction of the right actors in the right roles. It should go without saying that Perlman is a gifted comic performer as well as a skilled actor, but Tsang gives her the chance to be magical — sure, she’s got some of that Tomlin-esque brusqueness, but she’s also part-Yoda, part-Houdini, part-Maude, part-Grandma. She never patronizes Sammy, but she’s able to instill a bit of wonder back into a young adult kicking against the pricks of her tragedy-accelerated adulthood with all the frustration and grief and anger that it entails. Cech does a fantastic job of making Sammy’s initial acridity empathetic, at least for those who had shitty times in high school, and her growth over the course of the film — a reclamation of a person she’d thought she’d lost, perhaps — is joyous to behold.

I fully empathize with people who read this review and say “Man, that sounds unbearable,” because there’s a version of Marvelous and the Black Hole that I would have probably found as torturous as my fingernails being pulled. But give this movie a shot: It’s swell and comforting salve compared to other difficult films in the line-up, and it’s also a solid feature-film debut for Tsang.