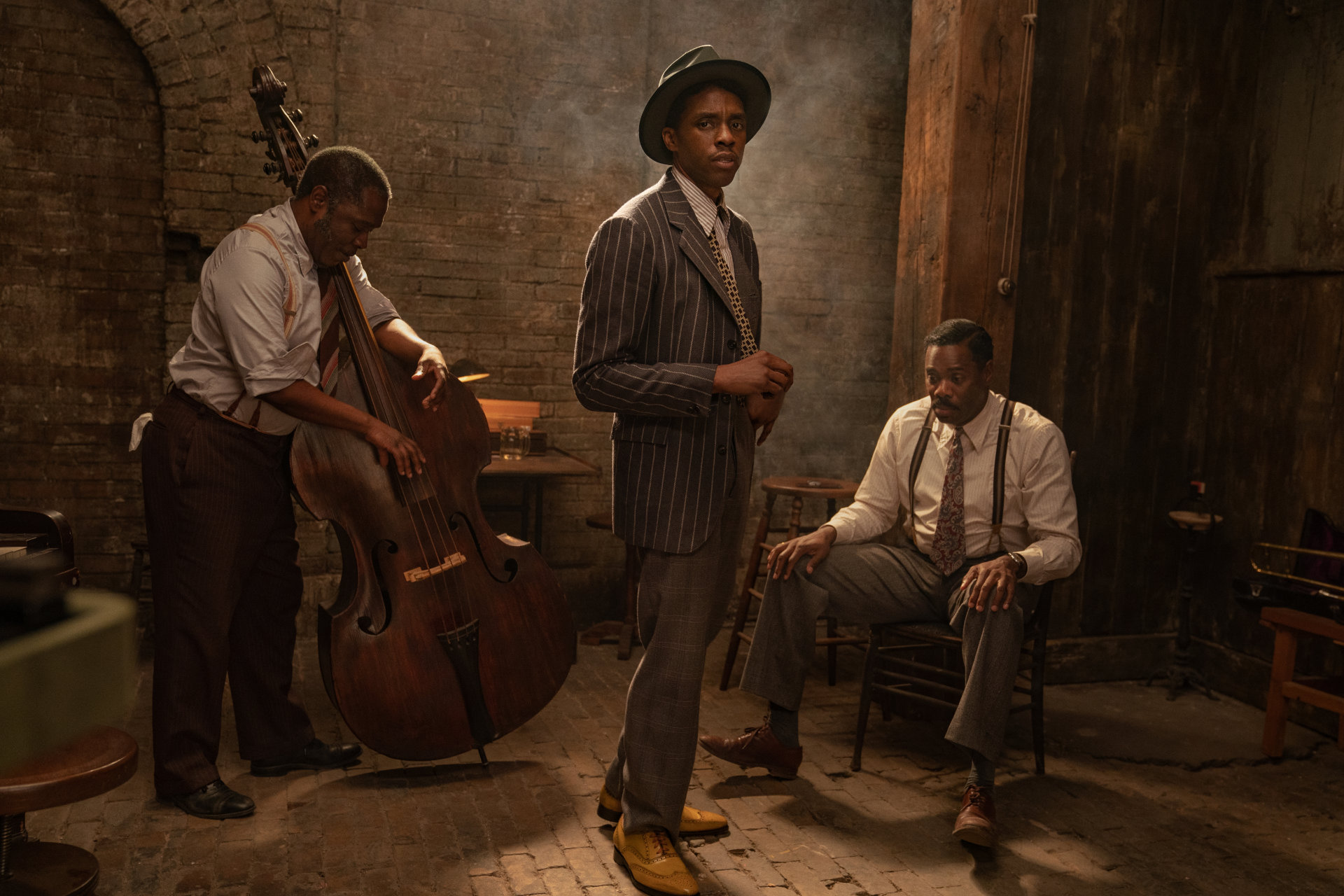 It’s hard to divorce George C. Wolfe’s adaptation of August Wilson’s Tony Award-nominated play Ma Rainey’s Black Bottom from the tragic circumstances of its release. Before a single still from the production was released to the public, Chadwick Boseman tragically passed away, and the wound from that massive loss makes it incredibly difficult to read it in any other way than an elegy for one of the greatest on-screen talents to emerge in the past decade. Indeed, it works wholly in that way, though Boseman’s vivacious performance allows one to occasionally forget about reality, but it’s also a swell adaptation of one of Wilson’s most fascinating plays, which, had it emerged into a kinder world, would likely still have received a similar amount of acclaim.

Ma Rainey’s Black Bottom takes place over the course of a hot summer’s day in Chicago back in 1927, when blues legend Ma Rainey (Viola Davis) and her backing band — ambitious trumpeter Levee (Boseman), sturdy bandleader and trombonist Cutler (Coleman Domingo), bassist Slow Drag (Michael Potts), and the thoughtful pianist Toledo (Glynn Turman) — have gathered in a recording studio to put a couple of songs on wax for her record company. Over the course of the day, the band encounters a series of delays — Ma’s initially late because her car got into an accident outside of the studio, she wants her stuttering nephew to record an intro to the number the film’s titled after, and the recording equipment keeps breaking — and spends a good amount of their day stuck in the green room beneath the studio, shooting the shit and rehearsing. But Levee’s got plans: He wants to start his own band and record his own songs, and he wants his versions of Ma’s classics to be the ones they record. So, a conflict begins brewing between the iconic singer and the newbie trumpeter, and only one of them can triumph.

Wolfe, the master responsible for bringing Tony Kushner’s Angels of America to the Broadway stage, knows how to coax brilliant performances from actors, and this is the cleanest translation of that on-stage skill to the screen. The script, penned by Wolfe’s longtime collaborator Ruben Santiago-Hudson, often runs into some of the same problems that theatrical adaptations do — in practice, it’s very stagey in its construction, despite the writer and director’s attempts to bring the action to other places — but the performers make it so compelling that I rarely minded. The entire ensemble is astonishingly cast, from Domingo’s presence as the sturdy backbone of the band to Turman’s gregarious whisky-sipped pensiveness, and, of course, his two leads. Davis is great here, with the theatrical nature of her character’s on-screen persona never once overwhelming the wants, desires, and frustrations of the person concealed beneath it. Ma has seen some shit in her life, and she knows that her record company is exploiting her, so she refuses to suffer the fools and their mistakes at this record company gladly. She knows that they’ll be done with her after they pay her, and she longs to get back on the road, where she knows that her audiences are there to see her perform. It’s an interesting, layered performance that often compliments a lot of the work that she’s done in the past.

Make no mistake: As good as Davis is here, this is Boseman’s film, and he captivates every second he’s on-screen, gliding across rooms while nailing the grace notes and flow of Wilson’s dialogue. He has a genuinely showstopping monologue at the end of what would have been the play’s first act, and it is also a centerpiece here, full of deeply-rooted pain and trauma, that grinds the film to a total halt, to the point where one almost wishes for the act break simply to catch one’s breath. I definitely don’t fault Wolfe or Santiago-Hudson for not knowing necessarily how to move on from that specific scene — the transition is slightly less than graceful — because I honestly wouldn’t know how to. Boseman’s keen on bringing out the tragic nature of Levee’s circumstance and his fall from grace, and there’s something almost Hellenistic about the nature of his subsequent collapse. There’s a lovely moment following a big blow-up between Levee and the rest of the band where Boseman turns his attention to a locked and nearly immovable iron door in the band’s room, and after a whole lot of pushing and kicking, he finally makes his way through, only to see that the door leads nowhere, that there’s no escape.

Again, Wolfe’s made a sturdy and good film here, a work which deeply respects both the talents of its origins and its ensemble, and allows the best of both to properly flourish in a cinematic way. It’s going to earn all of the accolades that are heading its way, but it feels odd and difficult to properly celebrate its achievements, knowing that it’s the last time we’ll get to see one of its stars shine so brightly, especially given the sterling quality of the work that Boseman put in in this particular film. But perhaps one should interpret Ma Rainey’s Black Bottom as a celebration of its actors, an old standard recorded well in stereo for the very first time, and that we are all very lucky that that we got to see it performed by one of the very best while we still could.