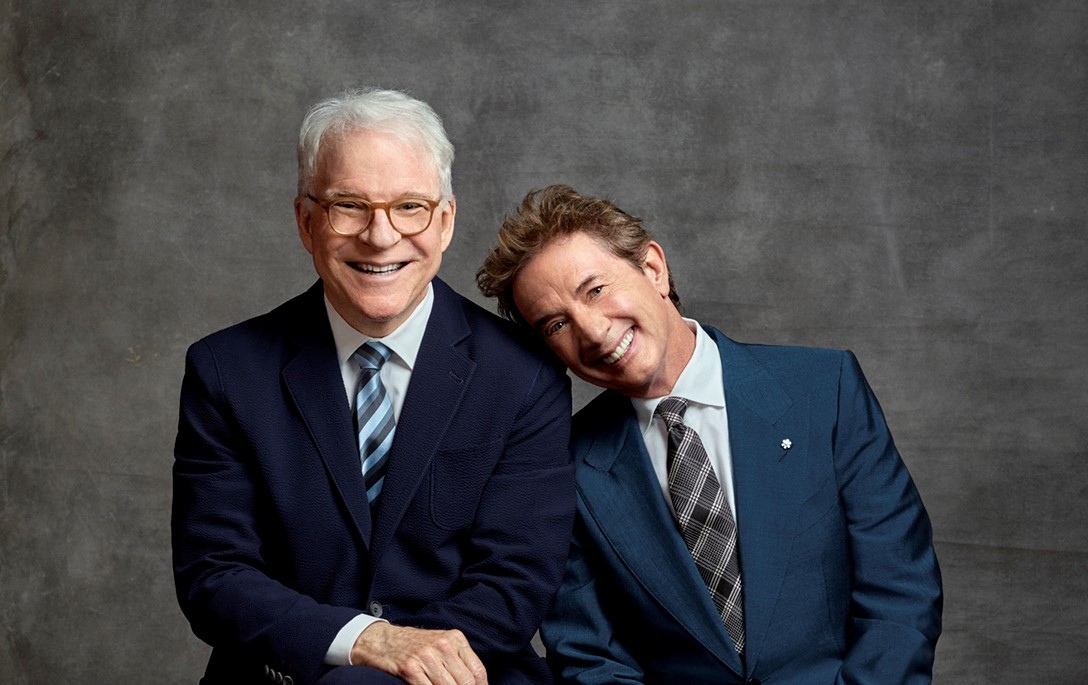 Interview: The comedy icons make their way to Springfield’s Symphony Hall after a month away from the stage

It’s nothing new for comedians to collaborate, or have good chemistry as both friends and performers on and off the stage. But Steve Martin and Martin Short are in a league of their own.

Both with careers spanning five decades, the two amigos continue to work side by side as both friends and artists, and as they’re set to bring their latest two-man show, Now You See Them, Soon You Won’t, to Springfield’s Symphony Hall on Thursday (September 12), neither they or their collective comedic genius are showing any signs of slowing down any time soon. We got the comedy legends on the horn ahead of their trip to the birthplace of basketball to pick their brains a bit, and it surely did not disappoint.

Jason Greenough: Let’s jump right in. How are you guys feeling about bringing this new show, Now You See Them, Soon You Won’t to Springfield?

Martin Short: We couldn’t be more excited! And you know why?

Steve Martin: Because we just had a month off, and we love coming back to the show, because it’s very fresh for us. We also have a lot of new material to try.

So, with this show, it’s not your usual stand-up type of comedy show. There are a few different aspects of it, with the storytelling and the musical elements with The Steep Canyon Rangers and Jeff Babko, so what can the crowd expect when they’re coming to see you guys do this show?

Martin: Well, Marty and I have a goal, and that is for the audience to think “that is the funniest show I ever saw,” and that’s what we aim for every show. We like to keep the laughs rolling, and the show keeps changing up constantly. We go from music to comedy and laughs, to Marty and his ridiculous costumes. Let’s put it this way — at the end of the show, I’m poised and I’m wearing the blue suit that I was wearing at the start of the show, and Marty makes 17 costume changes and he’s sweating.

Martin: Is that question for Marty?

Short: Yes. You don’t do any costume changes.

Short: So why would you answer that question?

Martin: Well, just let me off the hook once.

Short: Okay. Well, I’ve always done shows like that like, where I do a lot of costume changes. I did it on Broadway and I did it in my own show, so it’s a respite because now I’m off the stage. When I did my own shows, I would be on stage the whole time, so this is pleasant.

Now, obviously you guys have been friends for a long time, and you’ve worked together a lot, and even with these two-man shows, you’ve toured with this format for a number of years. But where did this partnership fully take shape?

Short: Well, we had been asked to interview each other to close the Just For Laughs Comedy Festival in 2011 in Chicago. So we just interviewed each other, and it was very successful, but we also mainly really enjoyed doing it, and it was really fun. Because it was a hit, we were asked to do it again in different cities, so we did, and it just kept evolving while Steve had his show, and I had my show, so we just kind of merged them.

Martin: Then we started working really hard on the two-man material that we do together. We had some, and now we have a lot.

Was there a full conscious effort to make the material conducive to a two-man show, or did it gel really well from the beginning?

Martin: Oh, it was definitely a very conscious effort. We worked very hard on it, and even get on the phone to go over it.

And that right there shows commitment again, since not a lot of people use the phone to speak to each other anymore.

Martin: Yeah! But Marty does not actually know how to use the telephone. I have to show him. Like, when we go into the dressing room, and there’s a telephone, he’ll say “what’s that?” and then I’ll lie to him. He’ll point to a thermos and ask what it is, and I’ll tell him it’s a telephone. It’s sad, really, when I come back into the room, and he’s trying to dial the thermos. It’s just so sad, oh my god.

So, I wanted to dig into your collaboration over the years, in a way. How has comedy changed, from your perspectives, since you started out?

Martin: It’s amazing, because when I started, there were comedians, there definitely were comedians. There was Bob Newhart, and George Carlin, and Richard Pryor, and there was a lot of older comedians. Now there’s thousands of comedians, and I’m surprised that comedy could actually last, because I remember thinking “when are we just going to run out of material?” and you realize that it’s because they’re funny people, and it’s funny people that make comedy sustainable. You can take the same material that someone is doing and give it to someone who isn’t funny, and it just dies, like, for example, when Marty tries.

Martin: Oh, sorry! But I think there’s just amazing amount of funny people, and especially writers. When we go do these talk shows, or just look at people like Tina Fey and Amy Poehler and see how funny they are. I mean, even that now is a different generation behind, but now you have John Mulaney and different people we know that are just so good.

Short: You could also most assuredly put Fred Armisen and Bill Hader on that list. Kate McKinnon and Kristen Wiig too. I think it’s exactly like what Steve just said. You can take a funny scene from I Love Lucy, and have Kristen Wiig do it again and it would still be as funny.

You guys came up in the golden age of comedy, and have really become gatekeepers to the history of comedy, and a lot of people look to you guys as experts, in many ways. But do you guys ever feel like you yourselves are still learning as comedy continues to change with the times?

Martin: I definitely do. When Marty and I started doing this show, about five or six years ago, I had only been doing the music show with comedy involved in it, but when I started doing that, I had a certain kind of delivery and I didn’t want to push it too much. Then I started to re-learn how much I could put into a line, and still not look like I was trying to spell it too much. So, the answer is yes. I’m definitely still learning.

How about you Martin?

Short: Oh, no. I stopped about 15 years ago, but I know what Steve means!

Martin: You want to know what I’m still learning after doing this show with Marty? I’m learning how to pick up the slack.

Now, whether it be through your film work over the years, or your stints on Saturday Night Live, you’ve both influenced countless comedians who have gone on to achieve superstar status themselves. Is it at all surreal to see that influence and success and still be active alongside those names like Bo Burnham, John Mulaney, and Stephen Colbert?

Martin: I don’t think we ever think that.

Short: No, not even remotely. First of all, I think the people that we’ve influenced are influenced by many different people, not just us. I can’t think of anyone in my world that has come up to me and told me they wouldn’t be here if it weren’t for me. It just isn’t like that.

Last question for you guys. With careers that have both spanned five decades, do you guys ever see yourselves slowing down? Or are you going to keep doing what you’re doing until something stops you?

Short: I think the only reason we would stop doing it is if it wasn’t fun or funny anymore.

Martin: Either that, or the audiences stop showing up.