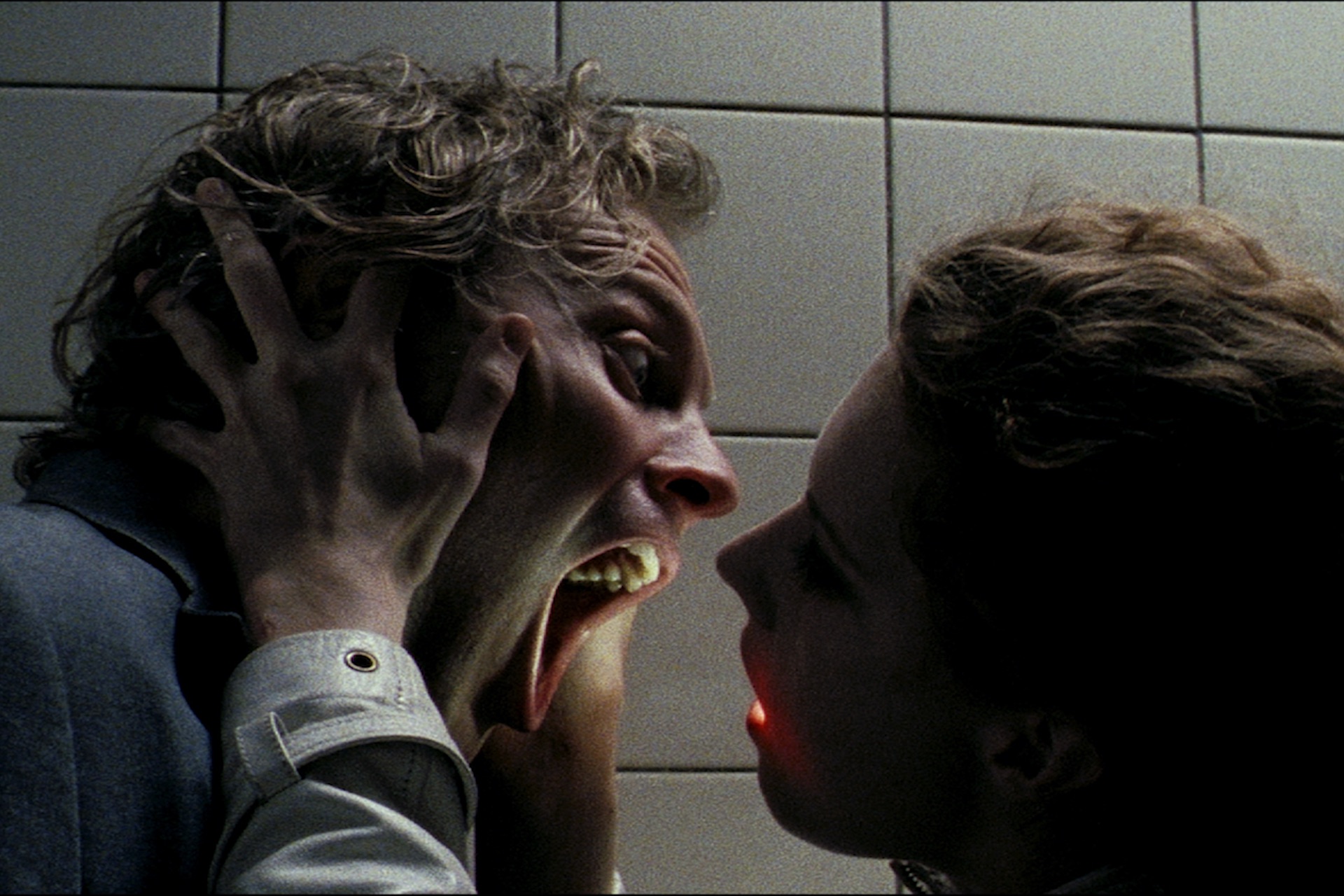 A young taxicab driver named Luz (Luana Velis) wanders into a police station, buys herself a soda from a vending machine and begins to scream at the waiting attendant, having survived an assault by a passenger earlier that night. The detectives sent to interview her, given a tastk well above their paygrade, note her lack of cooperation and call on a local psychiatrist for help.  Across town, at a local bar, that psychiatrist, Dr. Rossini (Jan Bluthardt) ignores his pager as he sucks down another drink. A woman (Julia Riedler) hears his beeper, and strikes up a conversation with him, and she tells him a grand tale of catholic school romances and demon summonings. As the doctor gets drunker and drunker, and the woman finishes her story, she invites him to the bathroom so she can help him sober up. When they get the stall, the woman kisses Rossini, a garish light shining from within her mouth, and collapses dead on the floor. So begins Tilman Singer’s Luz, a Euro-horror tribute shot on 16mm film that has been taking the genre world by storm since its debut last year. What it lacks in substance, it makes up for with style.

It’s hard to understate how simply this film is constructed, but that’s not a knock against it. Singer understands that his concept is thin story-wise and, as such, makes two great choices to elevate it. For one, he focuses almost exclusively on the aesthetics of the situation, making great use of the brutalist conference room that our characters are trapped in without ever making it boring. There’s one incredible sequence in which a hypnotized Luz goes through the motions of starting her cab while in the airport passenger queue, and, through Singer’s compositions and his sound design, we get a sense of place and space even though we’ve never physically left the room itself. His performers are fearless, with Bluthardt deserving a specific commendation for his committed, wild descent into total madness. Sonically, the film’s oppressive droning soundtrack and fascinating dual-language approach to dialogue and narration — so complicated that my screener for the film actually contained two different levels of subtitles, one in English and the other in German —make it a weird and unique experience that constantly provokes a visceral response.

The second is that he keeps it short, and it’s always good when debut filmmakers just decide to keep things as long as they need to be, rather than what they consider an audience (or financier) might expect or want. At 70 minutes, Luz doesn’t stick around long enough to become overbearing or redundant, which makes its aesthetic explorations all the more meaningful on a scene-to-scene basis because there’s such little fat to cut here. It’s always got your attention and your curiosity, and Singer never once loses focus of his ultimate goal. That said, some will see this aesthetic exercise as lacking the requisite substance for a feature, and on that point, they’re right. There’s not really much here beyond your garden-variety demonic possession story, and it never once pretends to be anything other than a showcase for its young director’s talents. In that regard, it’s a whole lot like George Lucas’ THX 1138, where the visuals are the point. But again, it’s barely over an hour, and features some of the year’s most interesting moments in the genre so far. So, what’s there to really lose?

Luz plays Friday, August 2 and Saturday, August 3 at the Coolidge Corner Theatre in Brookline as a part of their long-running After Midnite series, and it’s currently showing in Tuscon at the Loft Cinema. Other theatrical dates can be found at the film’s official website. It’ll hit VOD on September 27.