‘Happy Hour’ is much more than entertainment for Monica Bill Barnes & Co. 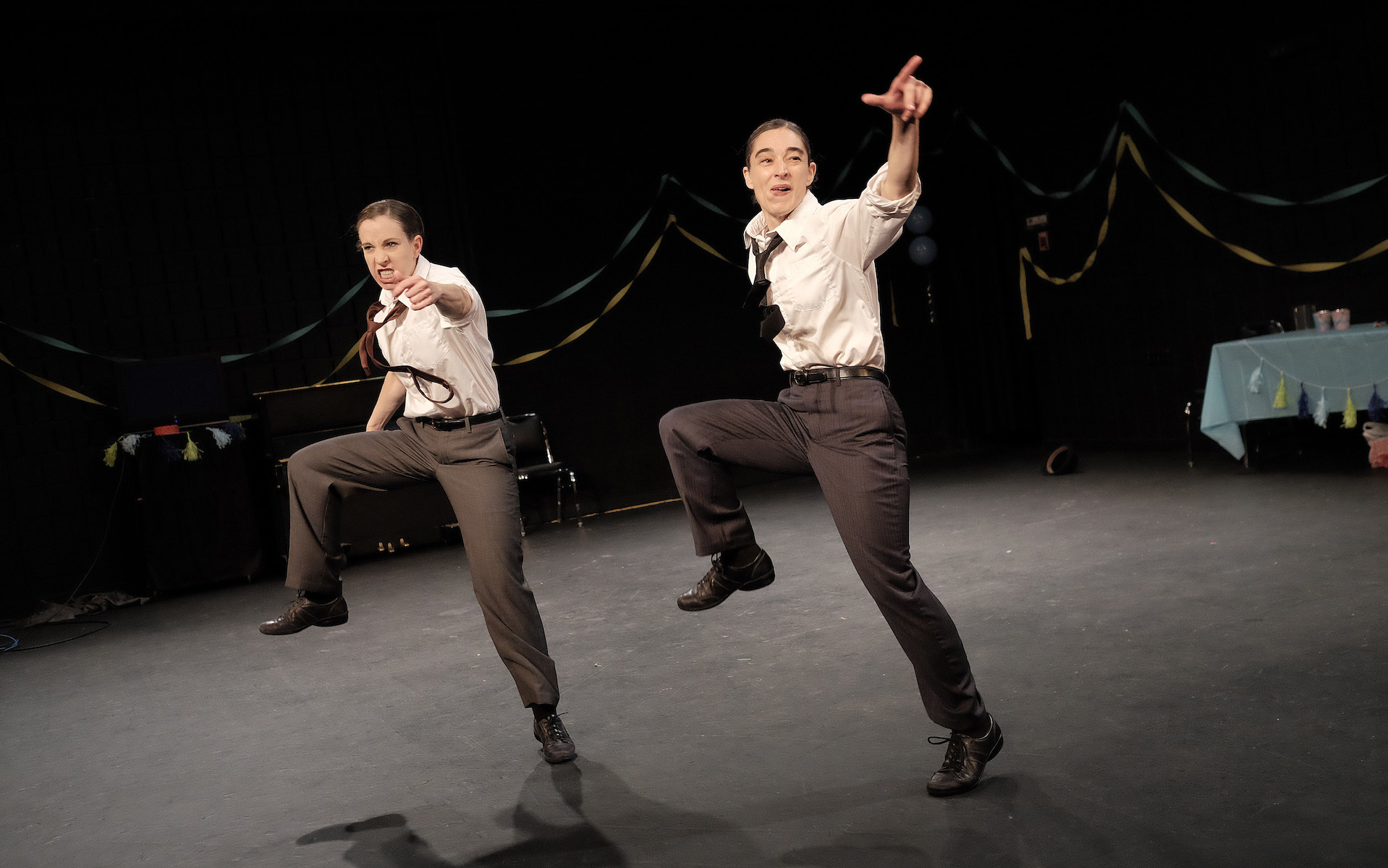 It’s been over four years since Monica Bill Barnes and Anna Bass last came to Boston with a full stage production. Now they’re coming back, and while this time around they won’t be accompanied by NPR’s Ira Glass, the duo is ready to get down to business in the Seaport.

Setting up shop at District Hall for six shows over five nights starting on Tuesday night (March 12), Barnes and Bass will be teaming up once again with Producer Robbie Saenz De Viteri to bring the insanity with Happy Hour, a dance-driven stage show that follows two competitive office space bros — played by Barnes and Bass — as they fumble their way through increasingly competitive dance numbers all the while attempting, albeit failing, to impress and pick up women during an office party.

While District Hall isn’t most well-known for being a production performance space, Saenz De Viteri feels that it actually helps to capture the “office party vibe” that he was looking for to present this performance as an all-immersive experience in which the Producer greets the crowd as they enter, as if he were welcoming them to take part in the office party.

“As artists, we’re interested in what it might feel like to work in an office since we don’t,” Saenz De Viteri tells Vanyaland, adding, “so it’s really fun to play a role in a world that I don’t actually live in myself.”

Sparking from a chance encounter with an office party involving barroom karaoke during a Seattle tour stop, Saenz De Viteri and Barnes started the production in 2015, and have toured it all over the country since 2016.

Sure, it’s a stage show meant to poke fun at the competitive nature many experience in office spaces, but Barnes knows that there is a bit of an added weight to the show’s message given the current social climate surrounding sexual harassment. And while it is a bit more of a disturbing message when you peel back the layers, Barnes admits that it’s that exact reason why it’s so important that the show must continue to grow, and engage with audiences about how genders interact in the workplace, while still remaining entertaining and fun.

Happy Hour — What People Are Saying from Monica Bill Barnes & Company on Vimeo.

“At its heart, the show is really funny and entertaining, but it’s also wanting to ask the audience to be aware, in a different way, of how men and women interact in the workplace,” says Barnes. “So a lot of the things that are funny are also, upon further reflection, possibly uncomfortable or troubling in a way.”

While being the star of the show this fun and entertaining has its benefits, of course, there’s a part of Barnes that has to stay in work mode for the duration of the production, which she admits causes her to see the show on a grander scale as opposed to a piece-by-piece production where she can find joy in specific aspects. But the one aspect she is able to pinpoint is pretty much priceless.

“I feel like, in some ways, that although I love performing, I’m still working, so as much as I would like to enjoy certain parts of the show, I feel like there’s always that part of me that’s just consciously thinking about how to shift into the next part of the show,” says Barnes. “But I would say that my favorite aspect is feeling like I’ve met the audience before I go on, as listen to them introduce themselves while Robbie is warming them up.”

Saenz De Viteri has a bit more space to enjoy the small moving parts of the production as the host of the evening, and that freedom has helped him see the production for a lot more than what meets the eye.

“This show is so obviously set up to have a really good and entertaining time,” Saenz De Viteri notes, “but I think the thing I’ve loved the most is the moment where the fun starts to kind of fall away, and the show becomes something you didn’t expect, in a way. The environment is so fun, and what the characters are doing is so funny, so it sets you up to be totally surprised for some connection you have to something you see on stage.”

While it’s obviously their main goal to bring entertaining and exciting experiences to their audiences, the duo certainly doesn’t overlook the affect their art is having on the crowds they’ve involved in this continuously growing stage performance.

“Our company is very interested in bringing people in to see dance who wouldn’t normally come out to see dance,” says Saenz De Viteri. “It feels like dance can be an abstract language that some people may not feel that they understand, and the show really does go very far to make people feel comfortable in an artform that they may not feel like they have a place in.”