Kamasi Washington brings a ‘Harmony of Difference’ to Boston 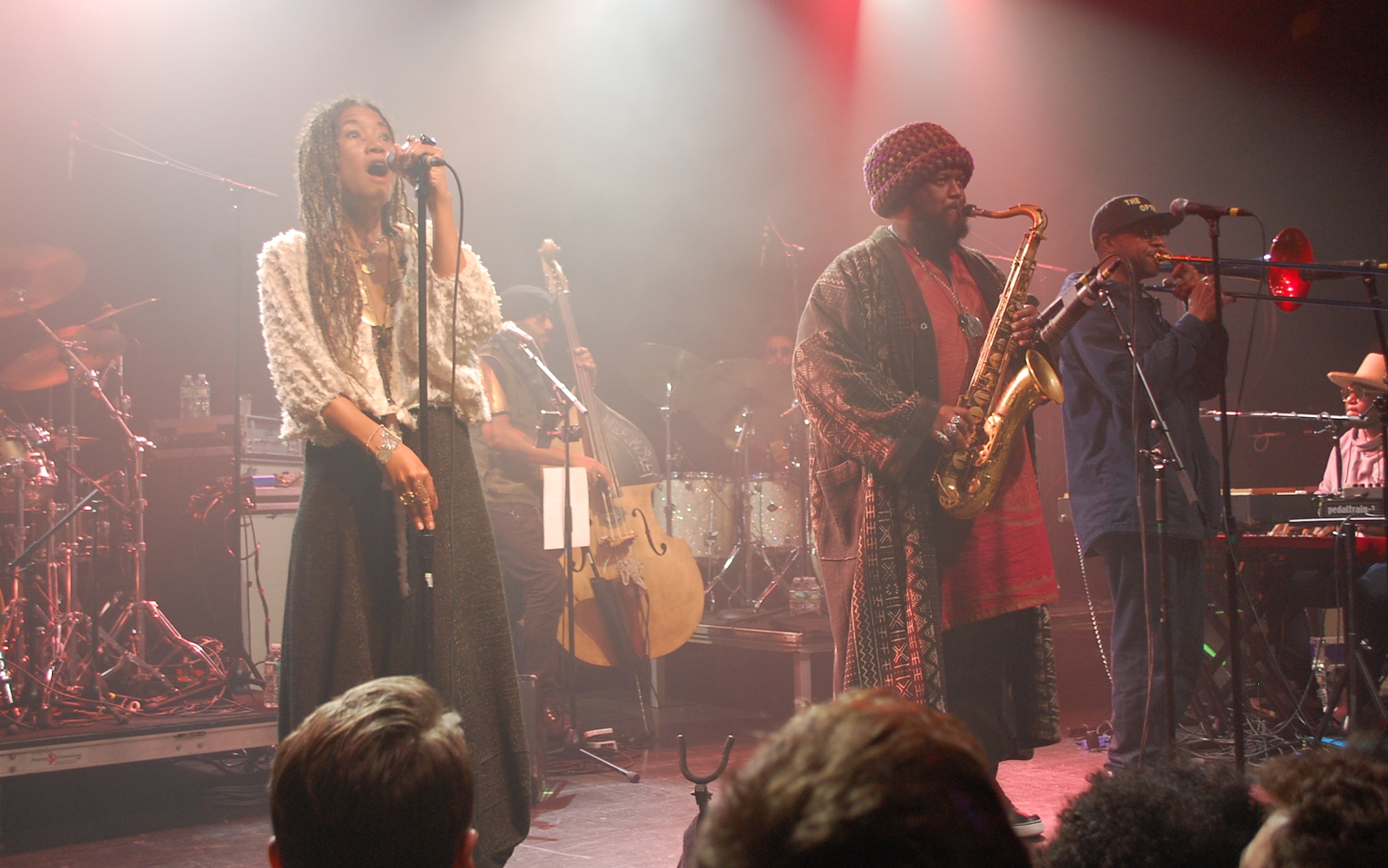 Kamasi Washington offered an uplifting message and an education on the harmony of difference on Thursday(November 8) as he took the stage at Royale in Boston.

The tenor saxophonist and talented composer became a jazz darling with the release of major label debut The Epic for Flying Lotus’ Brainfeeder label in 2015 and has remained in constant motion for the last three years. In addition to releasing Harmony of Difference EP last year and the sonic saga Heaven and Earth in June, he’s criss-crossed the world with his band The Next Step.

Washington’s work ethic has paid off, manifesting in sold out tours, larger venues and critical praise from the music media. In Boston, that manifested itself with lines of fans snaking down Tremont Street waiting to get a listen. Washington’s music, best described as a mix of afro-futurism and cosmic jazz, is cooked up in the studio with dozens of musicians, including an orchestra, a full chorus and a 10-piece band sometimes including Thundercat, Flying Lotus, Chris Dave and Terrace Martin. In Boston, Washington took the stage triumphantly to the tune of James Brown as he followed behind longtime collaborators trombonist Ryan Porter, vocalist Patrice Quinn, keyboardist Brandon Coleman and dual drummers Tony Austin and Robert Miller and Miles Mosely on upright bass.

Washington immediately took a gentle command of the stage with the epic “One of One,” the final track off the heaven side his most recent studio album. An epic song in its own right, the spartan version of Washington’s band carried it without breaking a sweat, providing an almost exact match sonically to the recorded version. That’s not to discount the absolute thrashing provided by Coleman’s keys and Mosley’s bass, which sounded at times somewhere between Jimi Hendrix and Marcus Miller. Dipping into “Malcolm’s Theme,” a blend of a Terrance Blanchard melody and the words of Ossie Davis at the funeral of Malcolm X, Washington and crew cooled things down and allowed for the crowd of hundreds a moment of reflection over a soulful groove. “Here in this final hour, we come to bid farewell to one of our brightest hopes,” Quinn sang.

Washington grew up with most of his live band in California and mused about Coleman’s evolution to the crowd mid-songs. “They’re all brilliant musicians,” he said on stavge Thursday night. “But I met Brandon Coleman before he played keyboards, back in the day when he was known for his dancing we called him professor Boogie. When he started playing keys, we switched to Dr. Sound, for all of the textures he brought. No matter how good a song was, if you put Brandon on it, it always got better, that’s when we started calling him Hot Sauce.”

Upon the release of his solo album, Washington said, Coleman adopted the moniker “The Wolf.” And with that, Coleman led the band as he intro’d “Walk Free” from his album The Resistance, a song Washington called “one of the most beautiful he’s ever heard.”

Highlights of the show came in the second half as Washington and crew led his band through fan favorites including the gorgeously sprawling “Truth,” the immense and spirituous, “The Space Traveler’s Lullaby” and the closer, “Fists of Fury,” a soul stirring version of the Bruce Lee movie theme laden with poly-rhythms and funk.

“Truth is a piece I wrote to remind us of how beautiful we are. I look out at this audience and see so many different people that come from so many different places,” he said. “I know we’re mostly similar, that little bit of difference is what makes the world a beautiful place… Diversity among all the people of this planet isn’t something to be tolerated, it’s something to be celebrated.”