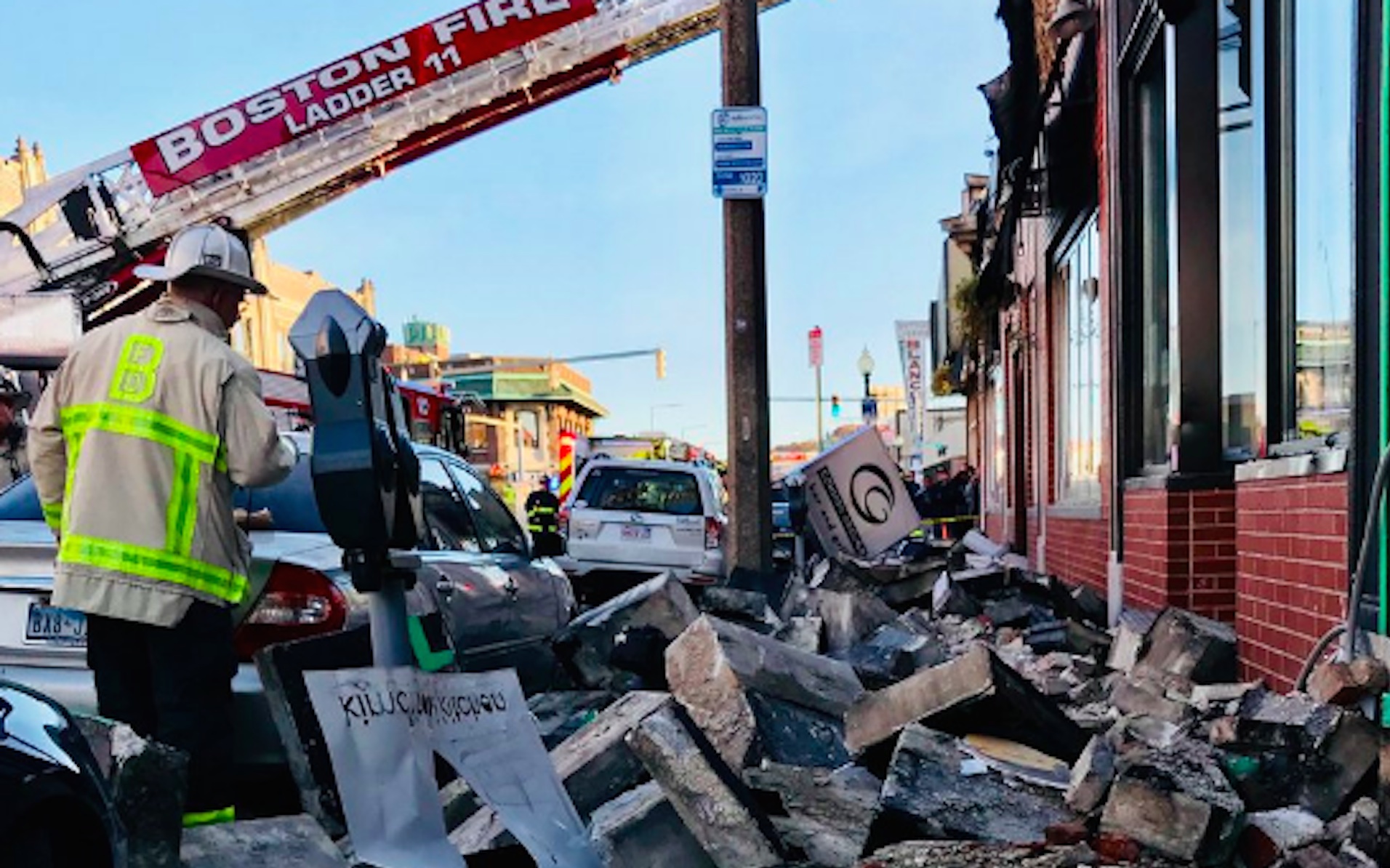 UPDATE: The Common Ground has re-opened well ahead of schedule and is currently serving a full food menu, slinging drinks, and hosting DJs, live music, and theme nights seven days a week. It’s good to have it back.

A Sunday afternoon building collapse in Allston has caused multiple injuries and shut down Harvard Avenue, snarling traffic in the area.

The concrete parapet of the Common Ground Bar and Grill in Allston crumbled to the ground around 3 p.m., injuring two people, one critically, according to UniversalHub, and trapping six patrons inside before firefighters evacuated the building from the rear. The Globe reports both people injured were taken to a local hospital.

Eversource and National Grid also responded to the scene, where fallen blocks of concrete from what reports are describing as Common Ground’s facade or parapet covered most of the sidewalk outside the bar. Its sign also fell to the ground among the rubble.

Allston Rat City tweets that the “facade of Kimchi Papi also fell”, and has been updating the situation.

In December 2014, a car slammed into the Common Ground’s brick frontage, underneath where most of the debris fell this afternoon.

The Common Ground is a popular sports-viewing hangout for college students and residents of the area, and hosts DJ nights, including its ’90s Night on Fridays and Millennium Night on Saturdays. In its history of dance parties, it has also housed Videodrome Discotheque, Love Night with DJ Brian, and a long-running mod night.

The front of the building at Common Ground in Allston collapsed 😓 pic.twitter.com/aBwp7E6aI8

Address for this incident has been updated to 75-85 Harvard Ave. Brighton. Heavy traffic in the area. @ISDBoston notified. pic.twitter.com/ur6BuwFgvZ

Tech Rescue response to 85 Harvard Ave. Brighton at approx. 2:56 PM for a building collapse. This is a 1 story commercial building that the front facade has collapsed on to the sidewalk. 2 injuries confirmed by @BOSTON_EMS . All occupants safely evacuated. @bostonpolice on scene. pic.twitter.com/RmH8Y8QHnW